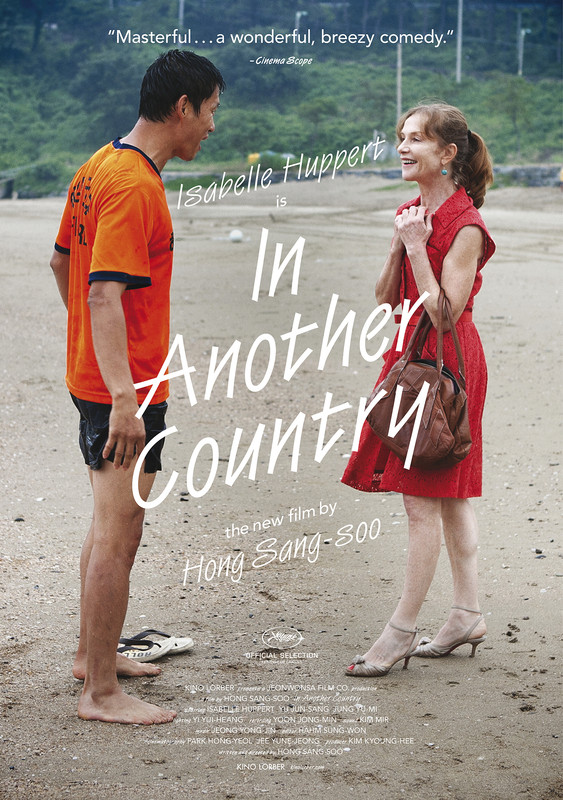 Despite my long-standing fondness for South Korean cinema, I've never previously seen any films by one of its most prominent auteurs, Hong Sang-soo. I've often meant to see his films when they have come to previous LFF's, but never quite got around to it, but I knew I'd be seeing this one as soon as it was announced that he had cast Isabelle Huppert in the leading role.

In Another Country is really three short films more than it is a feature, with Huppert playing a different French woman alone in a small Korean town, interacting with the same small cast of characters (some of them in slightly different roles from piece to piece) in each of the shorts. In the first part Huppert is a famous film director, in the second she's a woman awaiting the arrival of her lover; a famous Korean director and in the third she's alone after her husband (who may be a director in this part, it's not quite clear) has left her for a younger Korean woman.

After, for the first time, finding her on autopilot in another of her four LFF films, Dormant Beauty, I was really hoping that In Another Country would find Huppert on form again, and it largely does. Huppert has a reputation as a stern and icy presence (and to be fair, few people do stern and icy as well), but here she's clearly having a lot of fun, putting on a flighty turn as the various incarnations of Anne enjoy flirtations with Korean men (her host/lover and a lifeguard) or ask inappropriate questions of Buddhist monks (“What is sex for you?”). There's a sense that Huppert is relishing the (slightly mannered) silliness of the script, and particularly of the many scenes in which the same dialogue is used, slightly tweaked to the different situation, scenes in which she seems just a small step away from winking at the audience. It's a very different Huppert than we're used to, and a welcome change. The other performances are equally good, particularly a turn full of nervous energy from the actor playing the lifeguard [IMDB lists actor names but not who plays who for this film], who is uproarious in the first section, when he writes a song for Anne (“Anne, Anne, this is a song for you”).

Hong Sang-soo's direction is as intentionally mannered as his script, with Anne's changing character indicated largely by her changing dress, along with a few other physical indicators – hairstyles, clothes – that serve to show that the other actors are playing different people in each short. As constructed as it is though, the film is always fun, with Hong using a few dream sequences and wry match cuts as much as he does the dialogue in order to get laughs.

In Another Country is insubstantial. It plays with narrative amusingly, if less assuredly than In the House does, and the performances are all perfectly pitched. It's a fun confection which has encouraged me to try some more of its director's work, but it could do with being a little more substantial.
★★★☆☆ 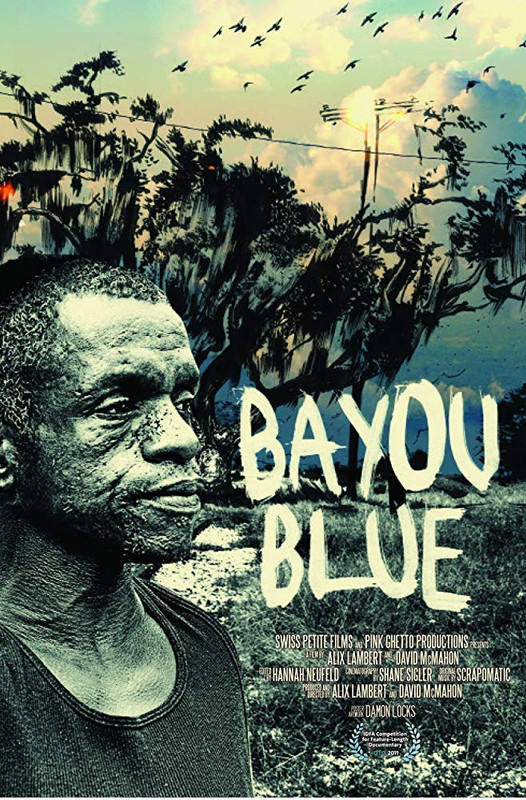 I've always been interested, perhaps because it's very far from my experiences growing up in a very safe corner of the South East of England, in the darker side of life. We all are to a degree – why else is 90% of the news in our papers bad news? But even at that ratio, the papers can't contain all the horrible things that people do to one another, and such was the case when it came to a relatively recent series of serial killings of young men down in the bayou around the New Orleans area.

Between about 1998 and 2006 Ronald Dominique raped and murdered 23 men, most of them not yet out of their twenties, and for some reason, even regionally, the story was hardly picked up. This was one of the worst serial cases in US history, and it was all but unreported. Bayou Blue looks mostly at the later cases, the ones that led two local Sheriff's office detectives from two different parishes to finally catch Dominique. Directors Lambert and McMahon talk to the detectives, to victims families and, in one very striking interview, to a man who seems to have come very close to making the victim tally 24.

It's a fascinating case, and the story is told with assurance by the filmmakers and passion by the interviewees but, while there are some nice visuals of New Orleans bayou, the pressing issue is really that there's no reason this should be on a cinema screen rather than on TV. There is also something of a lack of focus, as if this reasonably short film has used up all its most interesting information in the initial hour, and has to overextend itself for the last twenty minutes, touching on things like media and coastal erosion, which have little to do with the case at the film's centre.

On the whole, Bayou Blue is well made, interesting, television, but I can't shake the sense that it is television.
★★★☆☆ 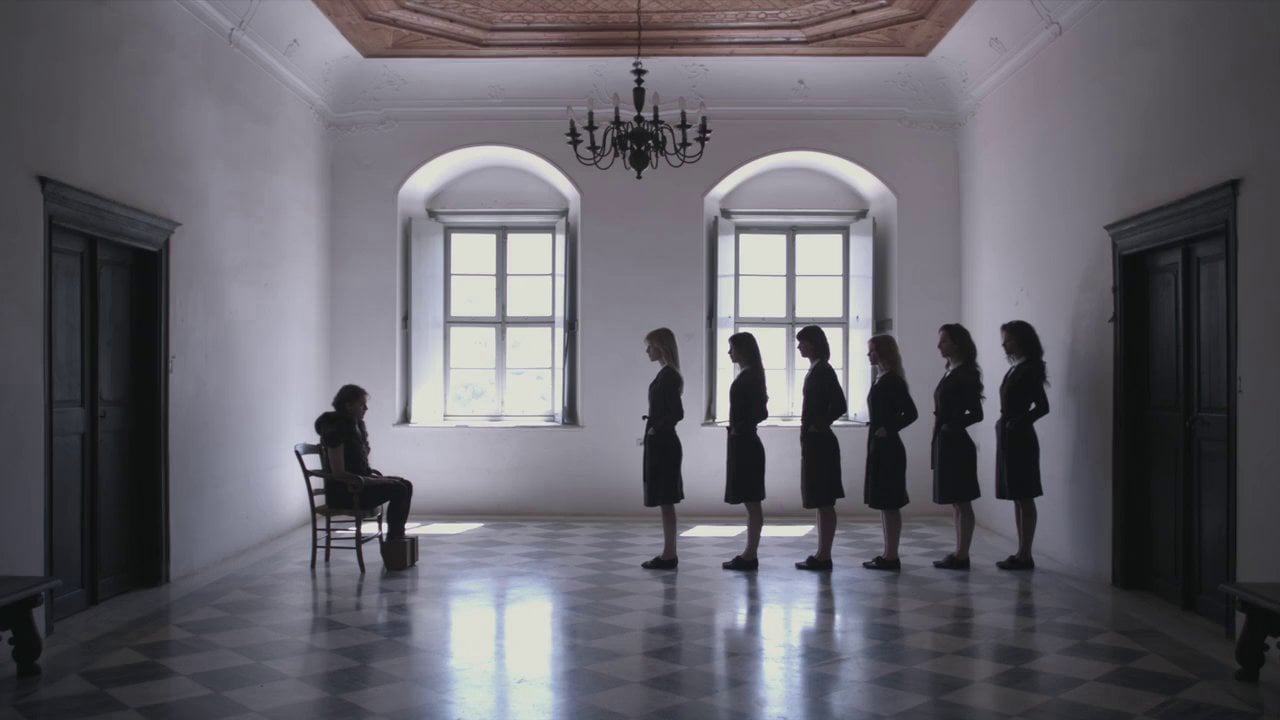 Athina Rachel Tsangarai follows her striking feature debut Attenberg, unusually, with a 35 minute short. The film seems to take place at a castle in a completely deserted landscape, where six young women (including up and comer Isolda Dychauck and Clemence Posey) are put through a series of bizarre scenarios by a beautiful authority figure (Tsangarai's Attenberg star Ariane Labed). They lead Goats around on leashes, they dance as Labed sings A Horse with No Name, they make confessions and are punished in odd ways (one girl has her hair tied in a knot across her face). These things are also interspersed with a handful of animated sequences (such as a topless Daychuck pulling her chest open, her crudely animated guts spilling out).

The Capsule is a film awash in film knowledge and references, and it recalls everything from Lucille Hadzihalilovic's Innocence to Lynch, to Bunuel and even, in its frequent focus on bodily detail and strange movement, David Cronenberg. The meaning is elusive, but it hardly matters, because the imagery is so strange and riveting (thanks in part, it has to be noted, to the strange beauty of each of the actresses Tsangarai has cast). This gorgeous, baffling, film makes me sad that the distribution routes for shorts are so limited, because it's a hypnotising film, and one of the best I've seen at LFF this year.
★★★★★ 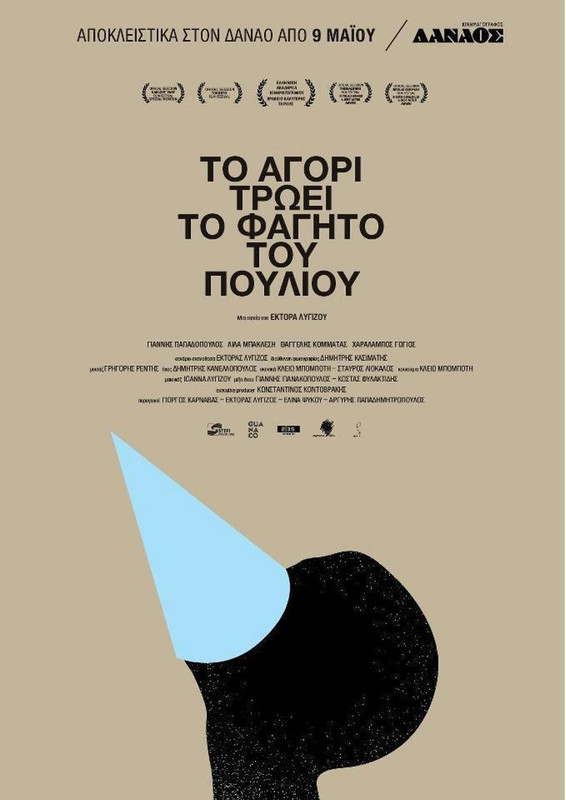 I'm – annoyingly for a writer – at something of a loss for words. How do I even begin to go about itemising all that I hated about Boy Eating the Bird's Food? I wonder, in all honesty, if when he hoped we'd “enjoy the next 80 minutes of our lives” before the film, the producer was being ironic or facetious, because even if you see value in it (and I don't, and nor do I understand how anyone might), this is hardly an 'enjoyable' film.

The story is basically covered by the title. The lead character (Yorgos Karnavas) seems to be in his mid to late twenties and lives alone with a pet bird. He eats bird food and other things he finds, he stalks a girl who works in a hotel, visits an elderly man who lives beneath him and generally walks around a lot. NONE of his behaviour is given reason, little of it is shown to have consequences. Showing a character doing stuff, then expecting us to fill in every detail besides, is not a story and it certainly isn't a character study. It's merely stuff.

There is little on the technical side of the film to get excited about. It's largely shot in that irksome handheld 'look at me I can't hold the camera still so my film must be super realistic and smart' style that has become so prevalent of late and it's impossible to tell anything about the acting, because we know nothing about what this character is supposed to be like (we don't even know his name until it is randomly blurted out perhaps 15 minutes from the end of the film by an unseen character).

As well as being boring the film is also often disgusting, most notably in an utterly gratuitous scene, apparently staged for real, in which the main character jerks off in his hand before licking it clean, as well as in its apparent suggestion that if you stalk a girl long enough she'll eventually let you get intimate with her, and even pack up your dinner for you so you can take it away. As much as I was hating the film before, it really lost me half way in, when the main character danced to a song on Itunes, and chose Broder Daniel's Whirlwind, the theme tune of one of my favourite films of all time; Lukas Moodysson's Fucking Amal.  Here's a tip for makers of future meaningless, character free, badly filmed pieces of cinematic dung like this: DO NOT remind me how much I'd rather be watching one of my favourite movies.

My parents have often asked me why I watch some of the films I choose to watch (horror, exploitation, etc etc).  I'd really like to ask Ektoras Lygizos why he thinks we should watch this.  Why for 80 minutes we should watch a character do nothing more than wander around, eat rotting food and occasionally stalk a girl.  Why does he feel we should see this and learn nothing about him?  What does he think we'll gain in insight?  Does he expect us to make up a backstory, given that the only clue we get as to why the character is how he is is a brief and singularly unedifying phone call to his mother?  What the hell is he trying to say with any of this?  I don't care, at the end of the day.  Boy Eating the Bird's Food is a waste of my time and even of the memory on the digital cameras used to shoot it.  I'll be stunned if I see a worse film this year.
★☆☆☆☆
Posted by Sam Inglis at 09:53