Having looked again at Yella, thanks to the BBC Iplayer, I found that my opinion of the film hadn't changed one iota, so much so that, rather than write a new review, I've dug through my archives and found the review I wrote at the time, which I can absolutely stand by. 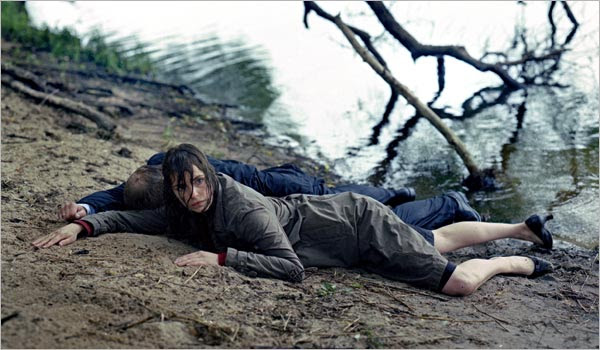 In the largely dreadful, po-faced, Atomised there was one bright spot, an excellent, flighty, performance by Nina Hoss as the mother of the main characters. It was Hoss’ presence that sold me on this strange arthouse thriller. There are two threads to the story Yella (Hoss) is being stalked by her ex husband (Schonneman), while at the same time finding a new job, and perhaps a new romance, with a lawyer (Streisow) who is staying at the same hotel as her.

The big problem is that these threads never really come together to form any sort of cohesive whole and so what you end up with is two separate movies, neither of which really feels complete. It can be quite plodding too, with a lot of the (brief) running time taken up by business meetings about company takeovers. There are flashes of inspiration; a dynamic scene between Yella and her husband in the car and a truly scary culmination of that storyline in particular but all too often seeds are sown but never paid off. Whatever good work is done story wise is, sadly, undone late in the day by a twist so head-slappingly obvious that I had dismissed it when, 45 minutes previously, I had figured it out because it would amount to a giant fuck you to the audience.

There’s a catch though. Nina Hoss, again, completely outclasses the film. Her icy performance is 180 degrees from the one she gave in Atomised and again suggests that she is an actress of estimable abilities. The other performances are also decent but those too pale against Hoss’ leading turn. If only we could now see this talented woman in a film worthy of her, that would be great.
Posted by Sam Inglis at 13:04