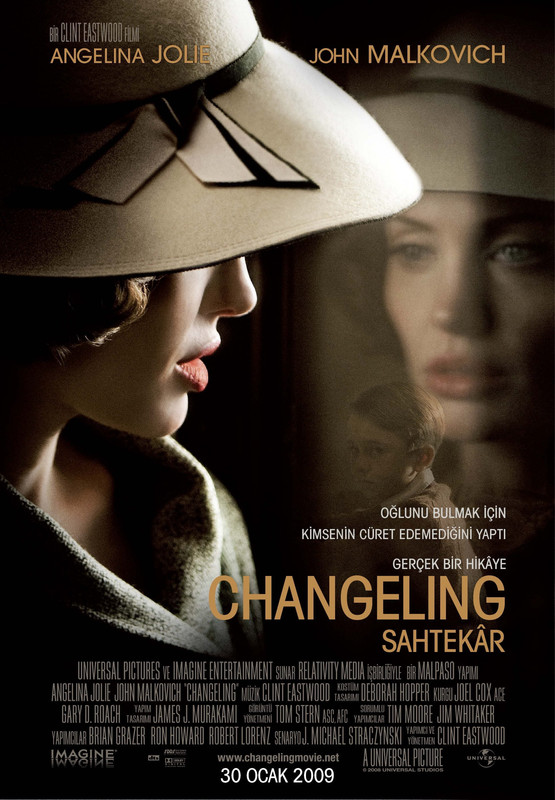 Clint Eastwood’s latest directorial effort is based on the real case of Christine Collins (Jolie), whose 9-year-old son Walter disappeared in 1928. Five months later a boy the LAPD claimed was Walter was returned to her, and despite repeated protestations that the boy was not her son the Police refused to acknowledge their mistake and resume the search for Walter.

At almost two and a half hours Changeling is something of a marathon, and in it there are probably several interesting films, but this one never quite catches light. It’s not that the pedigree isn’t strong. Eastwood has matured over the years into a fine director, much more interesting behind a camera than he is in front of one. Changeling certainly looks good, the period feel is recreated with great fondness and attention to detail, and there’s nothing that breaks the illusion, while the fluidity of Eastwood’s compositions and easy flow of the editing make it an easy, if traditional, watch.

Outside of the visuals, the film is more of a mixed bag. Jolie’s performance has Oscar bait written all over it, and it’s all the things both good and bad that that implies. There are a lot of scenes in which her quiet conviction is truly moving, but there are also moments (and if she’s nominated I’d bet my house on one of them being her clip) in which she goes a bit overboard, tipping into histrionics. There’s also the ever-present feeling that she’s acting. Perhaps it’s just that Jolie is so all-pervasively famous that it’s hard to see her as anyone but Angelina Jolie, but in Changeling I always felt I was watching Jolie act, rather than watching Christine Collins exist.

Among the supporting cast there are lowlights like Jeffrey Donovan’s Police captain, and his amazing disappearing accent and John Malkovich’s bewigged scenery chewing. Fortunately, there are also compensations. Jason Butler Harner is chillingly unhinged, and also rather funny, as a serial killer and young Eddie Alderson does good work as his coerced accomplice. It’s Amy Ryan who steals the show though, fast becoming one of the most reliable character actresses in Hollywood, she here impresses in a few short scenes as a fellow inmate when Jolie is committed.

The major issue with Changeling is that I often felt we weren’t following the story from the most interesting perspective. It would have been a more original and interesting film viewed from the point of view of the Police, and accordingly, the procedural scenes involving the hunt for Harner’s serial killer are some of the film's finest. It also feels padded, with a good half hour of fat that could quite easily be trimmed.

For the most part, Changeling is an engaging film, especially in its second act, when Christine is desperately trying to convince the authorities that the boy they have returned to her is not her son. This central conflict powers the first half of the film, and when it is defused with 45 minutes still to run much of the wind goes out of the film's sails. Still, there are enough outstanding scenes, like the third act confrontation between Jolie and Harner, or Jolie’s first interview with a doctor after she has been committed and enough good performances in Changeling to make it worth the time.
★★½
Posted by Sam Inglis at 16:30