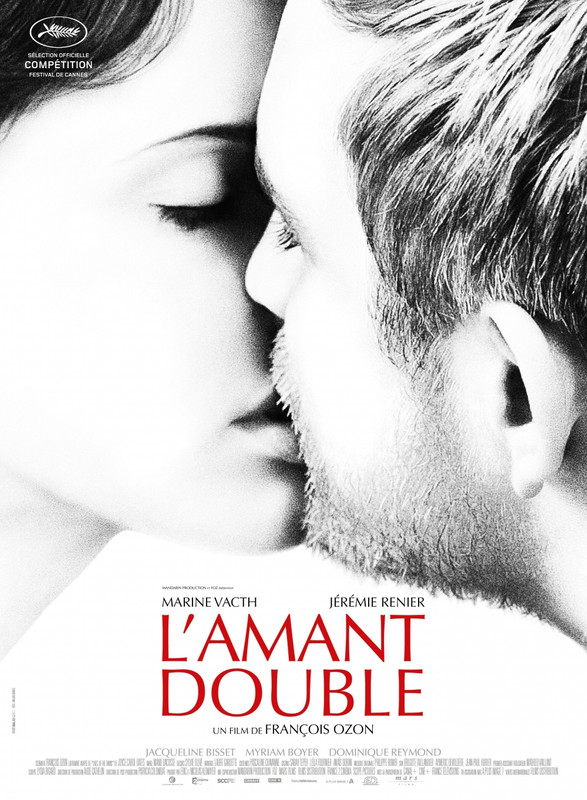 Another LFF, another new Francois Ozon film, regular as clockwork. This is an improvement on his last, the deeply disappointing Frantz, but I am beginning to think that Ozon, like a lot of auteurs who work at a rate of knots, would benefit from taking a break.

Adapted, apparently loosely, from Joyce Carol Oates’ The Lives Of The Twins, L’Amant Double centres on Chloe (Marine Vacth, back with Ozon after an impressive turn in the otherwise poor Jeune Et Jolie). Plagued by stomach problems that her doctors believe are psychosomatic she goes to visit psychiatrist Paul (Jeremie Renier). Paul and Chloe fall in love and soon she has moved in, but the stomach problems return. Having spotted ‘Paul’ on the street, Chloe discovers that this was in fact Louis (Renier again), a twin that Paul doesn’t acknowledge. He too is a psychiatrist and, under the guise of therapy, begins an affair with Chloe that takes her into investigating the dark past of her boyfriend and his brother.

Whatever you think of Ozon, he’s always been able to make a striking image, and one of the first we see in L’Amant Double is likely to be one of his most controversial. We open on flesh, and as Ozon’s camera pulls out it becomes clear we are watching a gynaecological examination, which then cross dissolves into an image of Marine Vacth’s eye. The film indulges in doubling and near doubling a lot and later we’ll see another image redolent of this one, this time in a sexual, rather than a clinical, context. It’s an audacious beginning, one that suggests the shock tactics of a Von Trier more than it does Ozon’s usual eye, but the film never again goes to these extremes, so it ends up an isolated image calculated to make us sit up at the start of the film, rather than adding up to much.

What L’Amant Double adds up to is perhaps its central problem, because the answer remains ‘not that much’. The themes of duality, twinning and their wrapping up in sexual desire are familiar not just from the likes of Single White Female and Dead Ringers, but Ozon’s own work. A key sex scene here evokes a, sadly, much less disturbing Society as well as a Cronenbergian feel, but Ozon advanced its themes much more interestingly in The New Girlfriend. Other images reveal a debt to Black Swan and, further, to its inspiration Perfect Blue.

The dual role of Paul and Louis allows Jeremie Renier licence to cut loose. A fine actor who previously worked with Ozon on Potiche and Criminal Lovers, Renier clearly enjoys himself as Louis, chewing on his every misanthropic line with glee, having fun with the counterpoint to the rather wet Paul. He’s best in the few scenes in which he gets to slip between personae, but otherwise each role is a bit one note, a well played note, but a singular one. Given that he’s now cast her as a lead in two films, I’m certain Ozon regards Marine Vacth as a big talent. In Jeune Et Jolie she was effective as an ingenue out of her depth, but here, with bigger notes to play in a more melodramatic setting, she seems a little lost at times. I found myself longing for Jennifer Jason Leigh, whose Single White Female performance nails the details and makes the psychology credible, while also hitting the operatic moments perfectly. I’m not sure Vacth totally sells either.

L’Amant Double isn’t a dead loss though. Ozon is clearly having a wonderful time indulging all his influences, and comes up with some amusingly overblown and audacious moments. A shot that takes us down Vacth’s throat to her vocal chords at the moment of orgasm is one of these, a more subtle one seeds a key twist in the museum display that it’s Chloe’s job to guard, while the geometric use of the screen - clean lines doubling Chloe and Paul/Louis in the film’s climax - is visually striking. Ticking off all the references is all but impossible (for instance, when did Ozon see Elle, is a shot of a cat a nod or simply a coincidence)? Ozon saves his best shot for almost last; a sly use of reflection and refraction in a window putting a bow on the film’s themes. Sadly he literalises this idea, getting an effective jump, but undercutting a great image.

L’Amant Double is entertaining but, ironically for a film that has several moments that are literally internalised, skin deep. The themes are an easy read, as is much of the plot (if not how much of it happens in whatever Ozon means by reality here). If you’re a fan of 90’s erotic thrillers then you’ll probably enjoy this and an Ozon fan will have much to do unpicking the surprising influences and contextualising this film among his work. Ultimately though, this is a lightweight film that feels very minor in one of the most interesting cannons around.
★★★
Posted by Sam Inglis at 22:17