Apologies for not posting more written reviews while I was at LFF this year, I was having serious computer troubles.  Here, by way of apology, are short(er) reviews of three animated films I saw.

My Life as a Courgette
Dir: Claude Barras 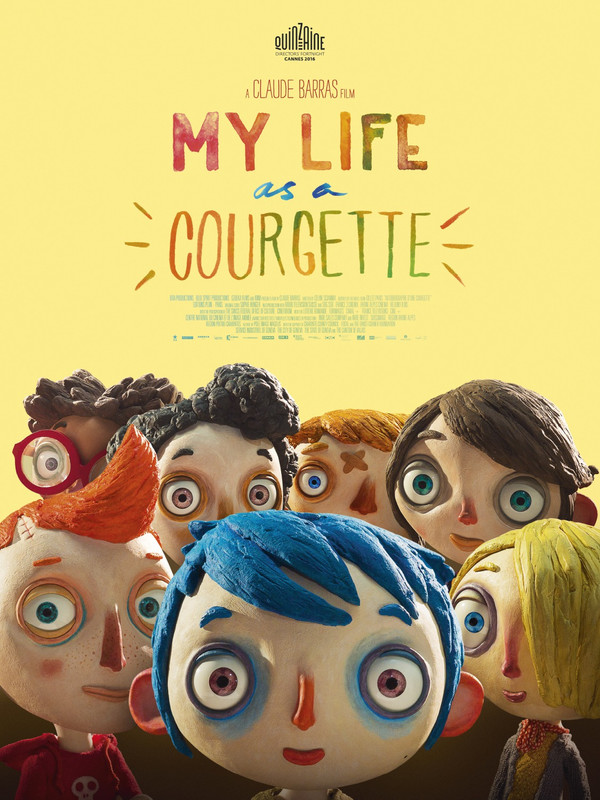 For my money, the French writer/director Celine Sciamma is one of the most interesting talents to emerge in cinema in recent years. Her three directorial films: Water Lilies, Tomboy and Girlhood all number among the best of their respective years and I await her projects with great anticipation. While Sciamma didn't have any directorial work in the LFF this year, she wrote the screenplays for both the new Andre Techine film, Being 17 and for this, a delicate, nuanced, but optimistic children's film about a boy named Courgette who falls for the new girl at the orphanage he's sent to after his mother dies in an accident at home.

Director Claude Barras and his animators craft an interesting look for the film. The characters all have a certain look, but the designs are striking and individual, giving even the characters with the least screen time a distinctive look. They are set against backgrounds that are often a bit drab and have a homemade feel, like something out of a Michel Gondry animation. This is effective in making the characters stand out from their environment.

For a little while it seems that My Life as a Courgette might be a pretty miserable film. We get the expected beats when Courgette first arrives at the orphanage and is bullied by a bigger kid, but this dynamic soon shifts and a much brighter film emerges. This home is depicted as one where there is a genuine sense of community, and the film has a real warmth thanks to that. Little recurring jokes, like one child running to the door every time it opens, expecting her mother, amuse while also giving the film surprising emotional weight, but it's the way that Barras' images and Sciamma's screenplay combine to capture the little moments that define growing up that have stuck with me about this film. Courgette and Camille's relationship is touchingly well-observed, as are the growing bond between Courgette and the cop who initially takes him to the orphanage and the shifting dynamics of the group of kids. These things may be played out by plasticine models and in front of cardboard backdrops, but they ring true.

My Life As a Courgette should be suitable for kids from about 10 or 11, but I'd imagine that their parents will enjoy it just as much, it's sweet without being sickly, funny without compromising on some the darkness at the heart of the story, and eventually extremely touching.
★★★★★ 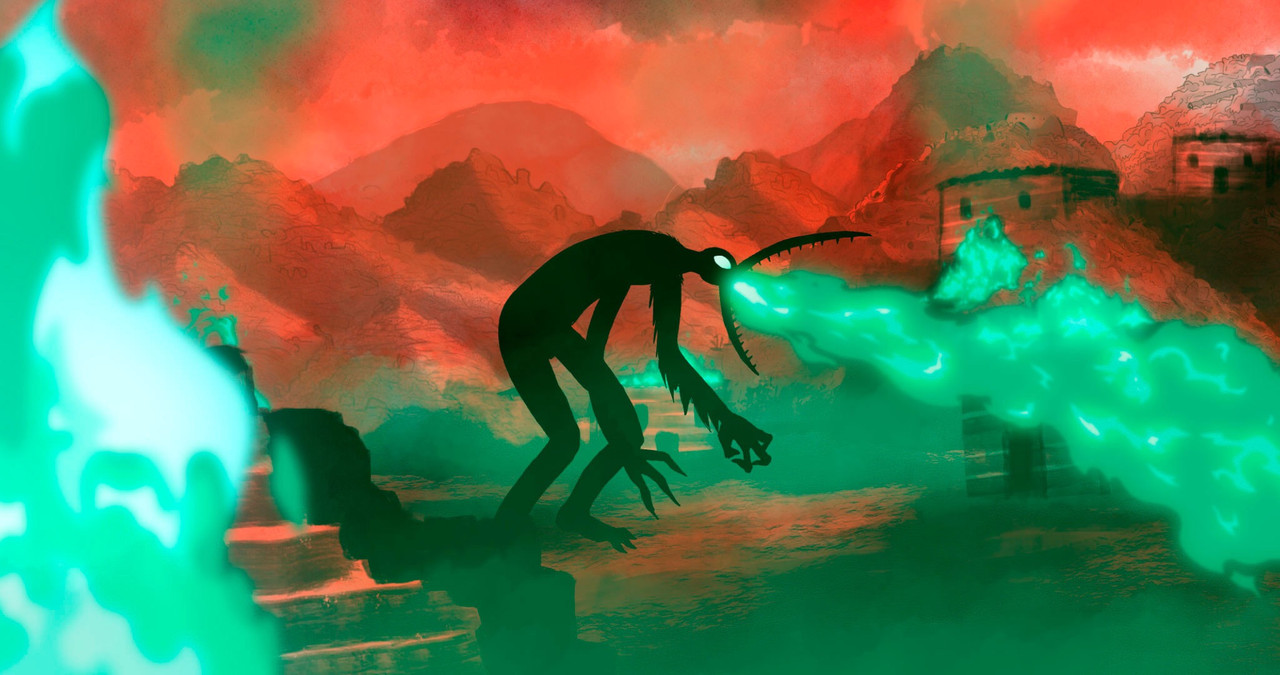 In a post-apocalyptic world, humans appear to have died out and animals are all that remains. Dinky longs to escape the island she lives on and her religious parents. For help she turns to her friends and to Birdboy, whose soul has been overtaken by a demon. To escape, they must make dangerous trek through the rubbish dumps where roving gangs of rats and mice live beyond the law.

Psychonauts is a determinedly offbeat film. From its visual style on down, it mixes tones, combining dark subject matter and imagery (sometimes sketchy, sometimes in bold red and black silhouettes) with offbeat humour and cute design on Dinky and her friends. The jokes leaven the darkness of the film just enough that Psychonauts, while properly scary at times, is probably suitable for older kids as well as for adults.

The film's biggest laughs often come in the margins, the little moments, such as when Dinky's brother tells his parents what he wants to be when he grows up, or when the inflatable duck Dinky and her friends get to try to escape the island on tells his backstory. As much fun as these moments are though, there is something chilling at the core of Psychonauts; a scorched earth world that feels complete in its design. The opening moments, with a mouse and his son scavenging for rubbish and invoking the rules of their community, set this up brilliantly, as well as setting up a surprisingly human and moving relationship between the characters. This approach will carry through the film effectively, especially in Dinky's love for Birdboy.

The animation is brilliant, the mix of styles well executed and fitting for the film's mix of tones, and it's often surprising what level of character Rivero and Vazquez manage to get of their designs. This too is especially evident with Birdboy, who is essentially just a few shapes in black and white, but is rich in character despite being mute. Birdboy's eyes; huge empty black holes signifying the loss of his soul, are particularly haunting, and end up communicating a lot.  The film is at its best when Birdboy, fully possessed by a demon, attacks the Psychonauts village. This is a sequence straight out of a monster movie, and a brutal one at that, with images of burning characters that call to mind the atomic bomb sequence in Terminator 2.

Overall, Psychonauts, the Forgotten Children is a great surprise; a well balanced tonal juggling act that will horrify and amuse in almost equal measure. I hope it finds a UK release.
★★★★ 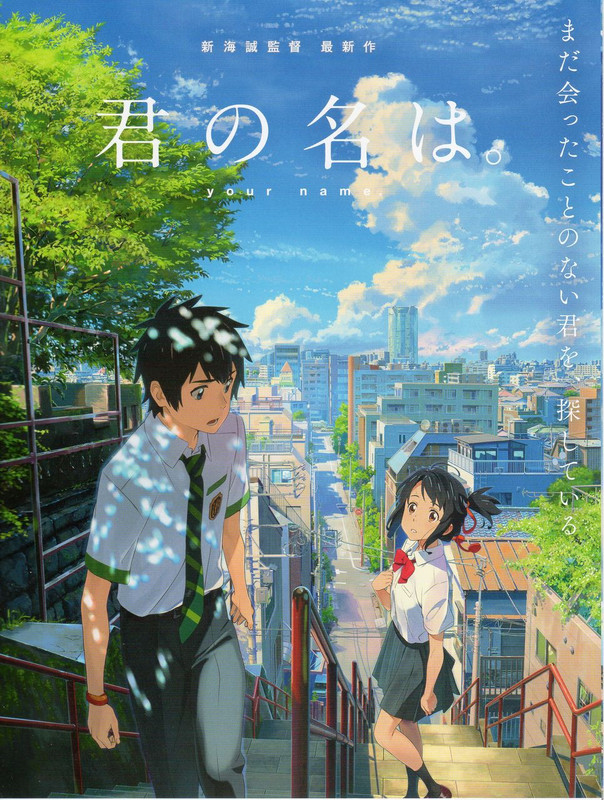 I've said it before, but it bears repeating, when we're talking about the most visually stunning films being made today, Makoto Shinkai needs to be in the conversation. His latest, Your Name, is the first anime to play in the (relatively new) London Film Festival competition section, and it is just as lush and gorgeous as we have come to expect.

Your Name will also feel somewhat familiar to Shinkai fans in its story (a tale of two young people falling for each other, though separated, then trying to find, and in this case remember, each other). While he is a visual master, Shinkai's flaws often come from his writing and Your Name doesn't have his strongest screenplay. Even for him, the boy sort of meets girl story that develops as Taki and Mitsuha begin to wake in each other's bodies is a rather sentimental and sometimes cloying one. That said, Shinkai does have a knack for this material, and while he sometimes overeggs the pudding, Your Name is also full of emotional moments that hit me just as deeply as the visuals did.

Visually, this is a film of dazzling beauty. The character designs are expressive, but as ever it's the world Shinkai grounds them in which is so stunning. From the most mundane things like images of trains passing, to the grandest in scale, such as the images of the comet that figures centrally in the film's story, everything is rendered with the same loving detail, everything seems lit from within. It's also important that the environments feel credible. There's a great sense of place and of the contrast between Taki's home in the fast-paced modernity of Tokyo and Mitsuha's life in a little village where tradition persists. If the film weren't grounded like this, then its flights of sci-fi fancy would strain credulity even more than they do.

The character work here is strong. As the voices of Taki and Mitsuha, Ryûnosuke Kamiki and Mone Kamishiraishi shift their performances as the characters become more used to 'being' each other several times a week. There are overblown moments in each of their performances, but they are allowed to be smaller and more subtle as the film goes on and become more affecting as this happens. The scenes as the comet finally comes into play, particularly one set at twilight, are delicately played, beautifully animated and ultimately very moving.

Like much anime, I found Your Name to be at its weakest when it is at its broadest. While there are some fun running jokes, the early body swapping sequences can be loud, lacking nuance and sometimes a little wearing, but even in those scenes, the beauty of the film and the fluency of its animation are engaging all by themselves.

This is a hit and miss film, it can even be a little grating at times. When it works though, when Shinkai pulls images, character and story together in a moment as simple and moving as a shot late in the film of Mitsuha opening her hand and seeing writing on it, it's as magical as the director's best work.
★★★
Posted by Sam Inglis at 11:25