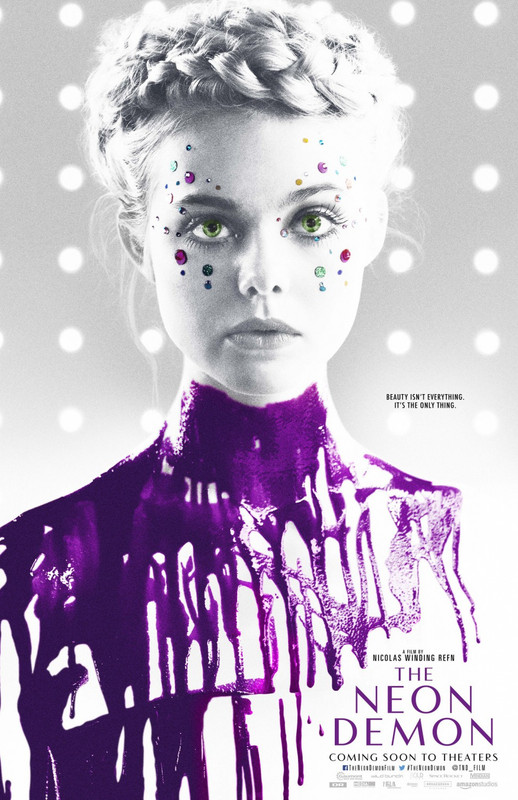 16 year old Jesse (Elle Fanning) has come to LA to be a model. She finds that her career takes off quickly.  She is recruited for a test shoot by a famous photographer (Desmond Harrington) and asked to close a show for a well known designer (Alessandro Nivola). Moving in new circles, she becomes friends with make up artist Ruby (Jena Malone). However, Jesse's personality seems to begin to change as she becomes aware of her effect on people. This quality along with her success, breeds jealousy, especially in fellow models Gigi (Bella Heathcote) and Sarah (Abbey Lee).

The Neon Demon feels very much of a piece with Drive and Only God Forgives, the two films that helped launch Nicolas Winding Refn, previously more of a cult figure, into mainstream consciousness. This being the case, I wasn't particularly anticipating it. I had liked Drive on my first viewing, but on revisiting it found an empty husk of a movie; a great soundtrack and stylishly mounted, but with nothing that emotionally engaged me. I didn't need the revisit with Only God Forgives. I was concerned that this film would see Refn deliver more of the same, but ultimately I think, this time, it's deceptive; style not over but AS substance.

Style drips from this film like the fake blood that drips from Elle Fanning's neck in the opening photoshoot, the themes of which set the larger themes that Refn and his co-writers Mary Laws and Polly Stenham will be exploring here. Most notable among these is the idea of consumption; that Jesse's personality is consumed by her success, that Ruby is consumed by attraction, that Gigi and Sarah are consumed by jealousy and that only an act of consumption can quell these feelings. Vampirism and cannibalism are ideas seeded early, in a striking scene when, after a casting that has gone well for Jesse but badly for her, Sarah seizes Jesse's cut hand and desperately drinks the blood from it, perhaps trying to ingest some of whatever youthful magic Jesse now holds over her.

Consumption is also what the Neon Demon of the title does. That demon for me, though there are other valid readings, is clearly the fashion industry itself; a relentless monster, attracting young girls (and boys) with the promise of glittering treasures which then, almost without exception, chews them up and spits them out in short order. This is hardly a groundbreaking hot take on the fashion industry, in fact it's what almost every film I've seen about that industry is about at some level, but Refn and his cast deliver this idea with style, verve and no small measure of wit.

If Refn reuses some established ideas here, he's also unafraid of showing his hand when it comes to the influences on the film's style. The film is soaked in giallo style imagery, with a particularly heavy debt owed the similarly colourful and surreal worlds of Argento's Suspiria and Inferno. In both theme and in the cold, body obsessed, imagery of certain scenes (particularly the striking morgue sex scene), Refn also owes more than a tip of the hat to David (and Brandon) Cronenberg. There are more influences on display too, but to Refn's credit he is not merely a homage artist, rather The Neon Demon takes its influences and remixes them into something that creates its own rules, its own look, its own world.

This combination of elements is perhaps best seen in the sequence in which Jesse closes her first catwalk show. We don't see her walk as it would be seen by the audience, instead we see her slip into a surreal neon lit world (perhaps into the jaws of the Neon Demon itself). This is where we see her personality take a bigger shift. Images of Jesse kissing her reflection in two mirrors suggest not only a growing narcissism, but the possibility that when she emerges from this moment we are perhaps seeing not Jesse, but a reflection of her instead. The sequence is dazzling to look at, with the images and Cliff Martinez' synth score combining to suck us into a new space, but it, like so much of the film, is also powered by a stunning performance.

Over the past few years, we have seen Elle Fanning grow up on screen. She has always struck me as remarkable; capable of performances that suggest a wisdom beyond her years, but without feeling actorly. Refn has said that if she couldn't or wouldn't do this film then it would not have been made. His instincts serve him well here. Fanning is perfectly cast and gives her best performance to date. Refn uses our perception of his actress to great effect. While Fanning has played characters older than her before, there is still something unsettling, transgressive feeling, about seeing her sexualised as she is here, especially as the film cuts between the Ruby's desperate sex scene in the morgue and her fantasies of Jesse. This isn't subtle commentary on the way the entertainment industry views and treats young women, but it's effective in the discomfort it provokes.

Outside of what her casting alone says, Fanning gives a typically mature and layered performance. There is always a sense that Jesse is aware that her beauty is a powerful commodity, but in the film's first act there is a sense that the model version of Jesse is a persona that the naive 16 year old from Georgia puts on. Fanning slowly shifts this, hardening Jesse with every scene as she is ever more taken in by the 'demon'. Soon it begins to feel like the young girl who, early on, goes on a date with Karl Glusman's photographer is the mask, that the previous mask has become the real Jesse. This is an impression we get ever more powerfully with each passing scene and it's that, as much as her sexualisation, that makes Fanning's performance so unsettling.

Women are at the forefront of this film, and it's notable that all the film's best acting work is from its female cast. Bella Heathcote and Abbey Lee are excellent as the older models, envious of Jesse's youth, the power of her beauty and her success. For the most part, these are performances defined by small moments. Several stand out, but few more so than Heathcote's reaction when Jesse's date, asked to evaluate Gigi's cosmetically enhanced looks, says "she's fine" and Lee's darkly hilarious moment in the film's final scene, a tiny twitch of the lip. As Ruby, Jena Malone has her best and most substantial role for some time. Initially she seems like the one unambiguously friendly face that comes to Jesse, but like the other characters she too is, to some degree, wearing a mask and when her ulterior motives are clear the film shifts gears.

The performances from the male cast are more of a mixed bag. A cadaverous Desmond Harrington (who explored similar thematic territory in the underseen Love Object) and a camp Alessandro Nivola are both great value, if as one note as the film's other male figures. On the other side of the coin, Keanu Reeves overplays and feels somewhat miscast as a sleazy motel manager, while Karl Glusman is a rather bland and anonymous presence as Jesse's maybe boyfriend. 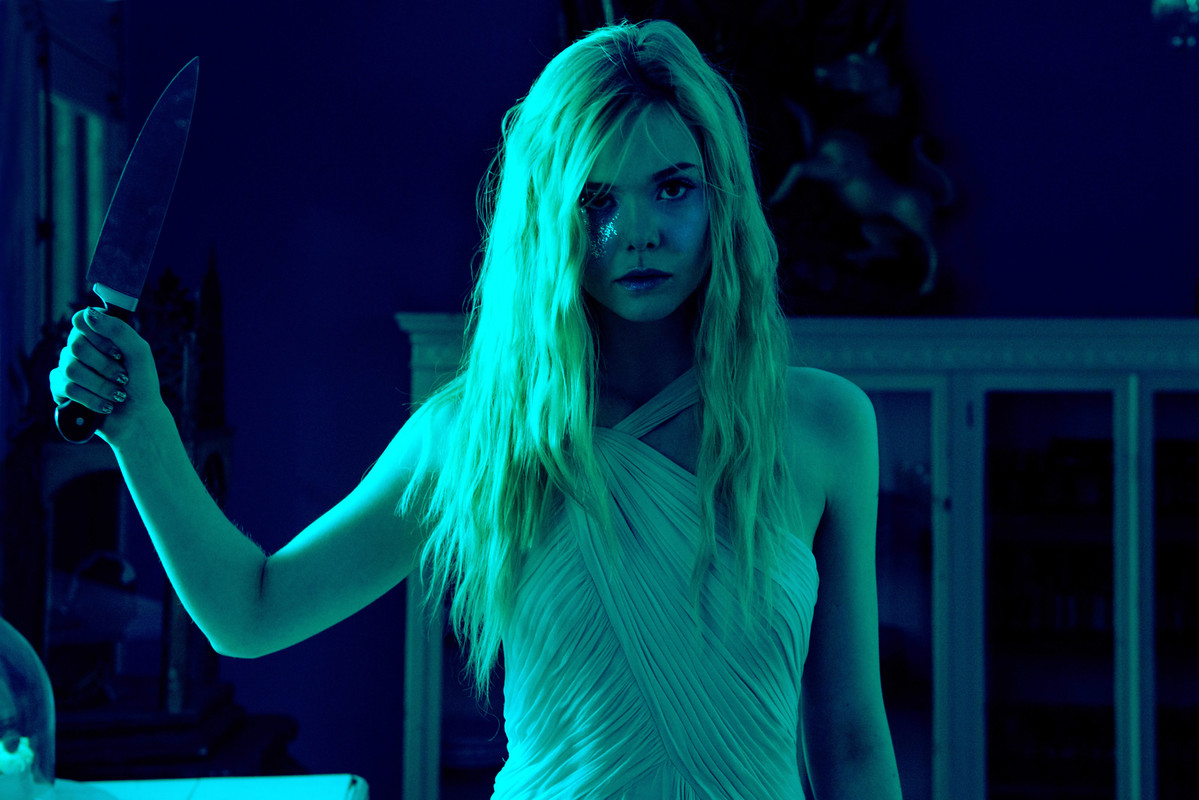 Technically, The Neon Demon is a marvel. It looks as crisp and perfect as the world it is set in demands, at least until we are taken back to the 'real world' of Jesse's motel room. While Only God Forgives was like watching silent outlines of characters move through treacle until they met and tried to kill each other, The Neon Demon has more developed characters and is better paced; it slows down to experience important moments that might feel drawn out to Jesse (the photo shoot, the catwalk fantasy), but moves through story and character beats without feeling like Refn is straining to make a running time. This pacing, the rhythm Refn imposes on the film, is also felt in the sharp editing, and in the way the cutting fits with Cliff Martinez' atmospheric score, which will surely end up as one of 2016's best.

More than most films this year, The Neon Demon has stayed in my head. Images, music, cutting, the way Refn focuses on eyes and the particular significance he places on Jesse's, all these things and more remain swirling around for me. Yes, I have my quibbles and reservations, but with a second viewing under my belt and more to come, they are feeling less and less important in terms of the overall feeling and atmosphere of the film. I'm not quite ready to put an extra star to the grade below, but ask me again at the end of the year and that may have changed.
★★★★
Posted by Sam Inglis at 17:05