The review of I Declare War was originally written for Verite. Many thanks to them for allowing me to reproduce it here.

“What are you doing after the war?”

“You're coming over, we're eating pizza and watching a movie”.

With this early exchange, I Declare War establishes the offbeat comic tone with which it will bend a host of war movie clichés, affectionately riffing on the pre-teen politics of friendship and the primitivism of the playground.

In a backwoods playground during summer vacation, two teams of twelve and thirteen-year-olds play a game of war. The goal is simple: find the enemy base and capture their flag. PK (Gage Munroe) is the fearless veteran who’s never lost a war, and doesn't intend to start, now that Skinner (Michael Friend) has assumed control of the other camp in a coup and taken PK's best friend Kwon (Siam Yu) prisoner. In his ruthless desperation to win the game and PK’s respect, Skinner is beginning to take the game too far.

The best coming of age films take us back to experiences we’ve all had during our formative years, and the stylistic choices made by directors Jason Lapeyre and Robert Wilson will have every member of the audience reminiscing about the self-seriousness of building forts and planning sieges in the fields behind their homes.

Plunging us into the fantasy war of the players’ imaginations rather than the actual reality of a game played by children, guns made of sticks tied and taped together become the M16s of Full Metal Jacket or the M60 machine guns of Platoon; while paint filled water balloons become intestine-mangling explosives. In one of the film's most knowing details, Wesley (Andy Reid), is seen in his first 'war' with a fake gun and ammo belt full of batteries, right until the final battle, when he gets fully swept up in the illusion and importance of being base camp’s last line of defence. The 'real' guns hint at the cruelty kids are capable of while also accentuating the absurdity of the fact that getting shot means only having to stop moving and count to ten before re-joining the game. In the age of Kermode's six-laugh comedy, I found myself laughing out loud much more than that, especially at a moment where Frost (Alex Cardillo) finds a big stick and becomes overwhelmed with all the possible firearms it could be turned into (“I'm in love with this stick”).

This insight into the way that kids play informs much of the character development, and while a few are a little broadly drawn, the dialogue and performances are, for the most part, engaging and believable. Especially strong in the ensemble is the double act of Sikorski (Dyson Fyke) and Frost, a chattily hyperactive, rather irritating little runt who thinks Sikorski is his best friend, completely missing the tight-lipped, much bulkier boy’s evident irritation with him, resulting in some of the film’s funniest scenes.

Pulling on lots of movie military speak and genre archetypes, the dialogue has a keen awareness of guns, glory and growing pains, drawing distinctive voices for each of the kids, PK in particular, who’s obsessed with the film Patton and talks in warriorisms like a pint-sized George C. Scott. The only element that occasionally clunks is how PK and Skinner are drawn as such polar opposites, even though they were once supposedly friends. As Skinner edges ever closer to apparent psychosis, the film begins to strain even the credulity of its own invented reality, but Michael Friend finds layers in Skinner that enable us to still feel sorry for the bully, especially when you view his behaviour through 12-year-old eyes.

Filtering the usual coming of age themes through a tongue in cheek use of war movie clichés, Lapeyre and Wilson have come up with something witty and original that rings true of the outdoor games of that age. A small pity then that the film's realistically salty language means the BBFC don't consider children the same age as the characters mature enough to see it.
★★★★ 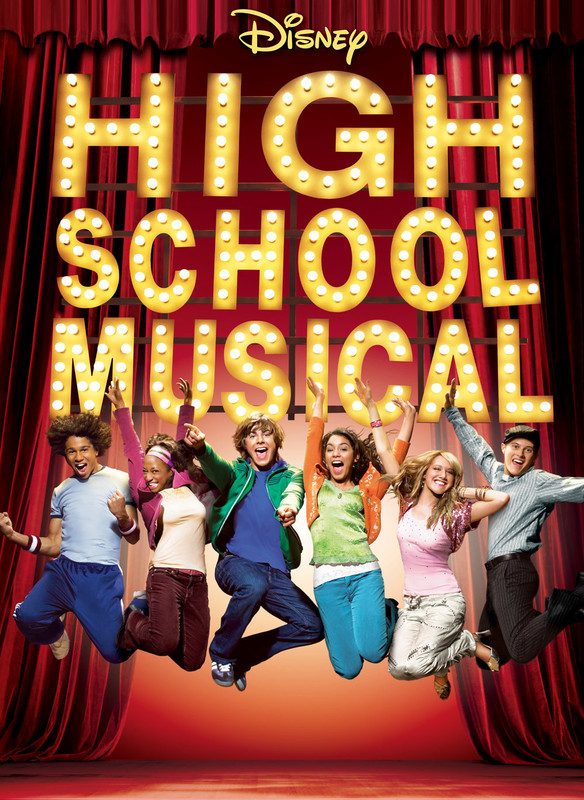 I'm 34 and male, so I'm aware I'm not the audience for this, but that said I like a lot of things I'm not the primary audience for (other teen movies, for example) and part of my job as a film critic is to place myself in that designated audience and at least attempt to assess what value a film has for that audience. I can, for example, see why young kids might get more out of Cars, while when it comes to Pixar Toy Story 3 speaks more directly to me.

I have tried looking at High School Musical from this perspective, and while I can see why the audience that grew up with it might have some residual affection for it, the way I do for certain TV shows from the 80s, I really can't imagine why they would consider it good, on any level. However, if I'm going to look at modern teen movies in any kind of detail, this film and its sequels need to be part of that, as their blockbuster success is all but unprecedented for what started out as a relatively modest TV movie.

As you might expect of a Disney Channel Original movie, the setup is very simple. Troy (Zac Efron) and Gabriella (Vanessa Hudgens) meet and swap numbers when they sing karaoke together at a New Year's Eve party. A couple of weeks later, Gabriella transfers to Troy's school. Troy is a basketball star and Gabriella a brain, but both are secretly good at and passionate about singing and they're inevitably torn between their other activities and auditioning for the school musical.

The film adds complications; best friends (Corbin Bleu and Monique Coleman) who think Troy and Gabriella should stick to their established cliques and bitchy Sharpay (Ashley Tisdale) and her brother Ryan (Lucas Grabeel) who rule the roost in the school musicals. Each of them, like Troy and Gabriella, has a few bare traits in place of a personality and is ultimately as dull as the film's music.

I was expecting High School Musical to be awful. Really awful. Awful in a way that would prove unintentionally entertaining and allow me to fill this review with jokes about how extravagantly shitty it is. It's not that bad, and that qualifies as a problem, because at least if it were that awful I might have had some fun watching it, but as it stands it's just dull.

The songs are leaden; processed uninspired crosses between the most mainstream tween pop 2006 had to offer and a series of underwritten showtunes (just listen for how many times 'Get'cha Head in the Game' repeats its title). If the music were live then it might at least have a little charge to it, but not only is everything performed to a track, Zac Efron's vocals are largely performed by another singer (Drew Seely) and autotune is detectable during just about every song, especially Tisdale and Grabeel's performance at the callback auditions.

Efron and Hudgens deserve better. At the very least both are likeable and the fact they were dating off screen comes through, with a genuine and rather sweet chemistry between them. The rest of the cast overplay to the hilt, sometimes the film seems to become a contest to see who can deliver the worst and least subtle performance. Tisdale, flouncing her way through every scene like Regina George without even accidental wit, challenges, but it's Alyson Best (as the school's drama teacher) who triumphs, thanks largely to her grating pronunciation of 'Musicale'. 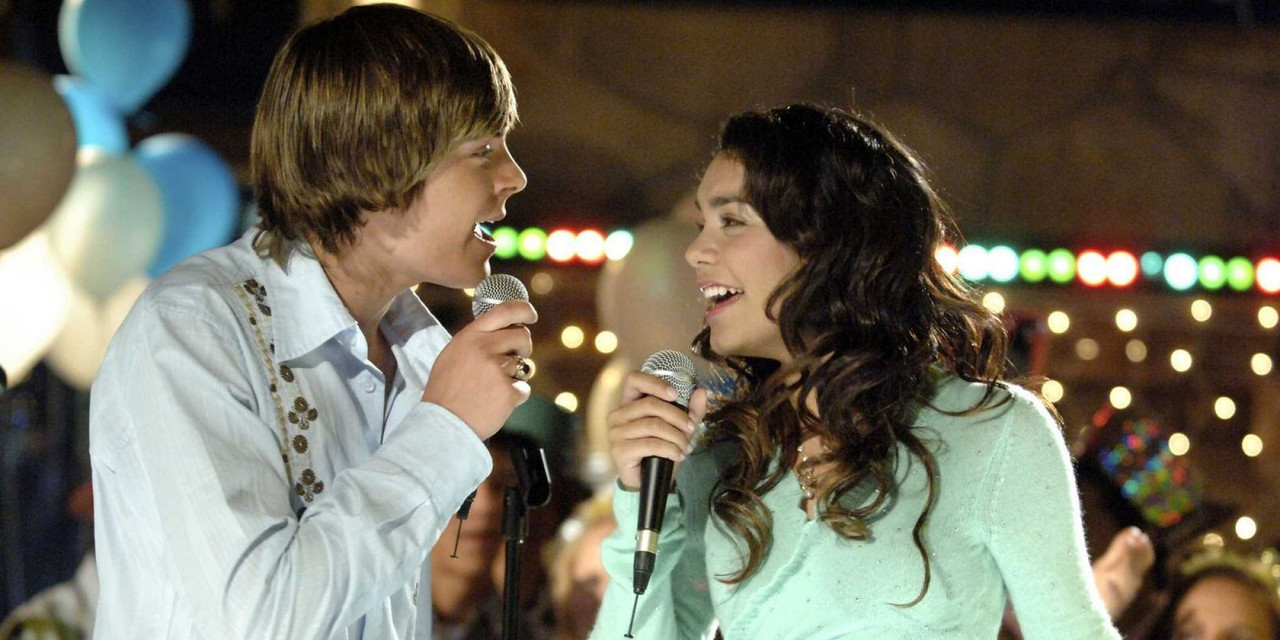 The message - be yourself, even if you think you might make a fool of yourself - is telegraphed and delivered with sledgehammer subtlety, but at least it's a positive thing to say to the kids that this is aimed at. This is the focus of the only sequence in the film that stands out from the otherwise overwhelming tedium.

'Stick to the Status Quo' isn't a brilliantly written song, but it has a decent concept - kids emboldened by Troy saying he likes to sing confess their unexpected passions, only to be told they should stick to their cliques if they want to be accepted socially - and is the only moment that the film takes to set out its message by doing something other than simply stating it. It's still not anything I'd ever consider listening to, but at least, cliché and overstated as it is, this song speaks a little truth about the tribal mentality that can be seen at high school.

If you're ten and into the tween pop that High School Musical pedals, I could see why you'd have fun with it, or look back at it with an affectionate nostalgia if you saw it at that stage, but it's not good. The songs are weak, the jokes are lame (Corbin Bleu's line about Sharpay spending her time "shopping for mirrors" is a low point), the characterisation is beyond broad and the performances are almost uniformly dreadful. This high school movie will have nothing to say to you by the time you can go to high school, never mind when you're 34.
★★