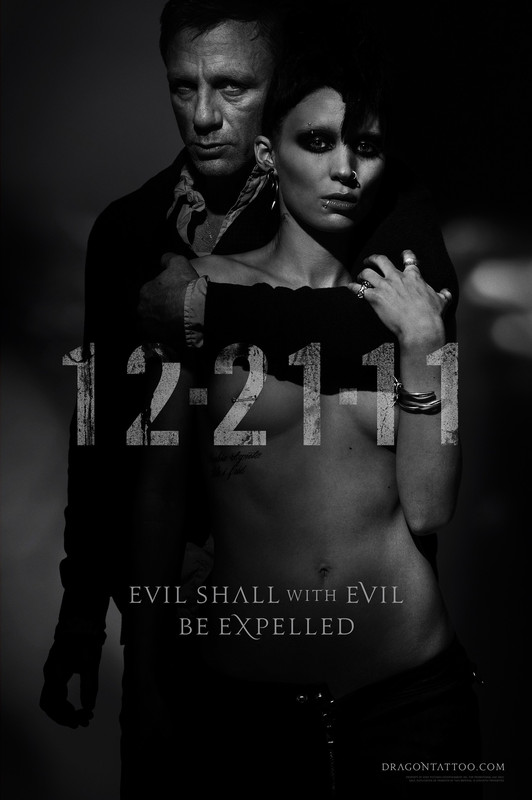 David Fincher is generally regarded as one of the world's finest filmmakers, and at his best you'd be hard pressed to argue with that summation, but for me Fincher's hit rate is really only 50%.  Discounting Alien3, which he's never officially taken ownership of any version of, Fincher's career falls into a pretty clear on form/off form pattern with modern classics Se7en, Fight Club, and Zodiac followed respectively by the solid but uninspired The Game and Panic Room and the cloyingly awful The Curious Case of Benjamin Button, and so, following modern classic number four (The Social Network), it seems Fincher is due an off day, and so it has proven with The Girl With the Dragon Tattoo.

Despite the fact that Steig Larsson's posthumous mega-bestseller is very much in his wheelhouse, with its tales of serial murder and long running mystery, this still seems an odd assignment for Fincher. Yes he's worked extensively within genre cinema, and yes he's adapted stories from other media before, but he's probably the last person I expected to sign up to Hollywood's latest little obsession; the remake. As most readers will know, Larsson's books - all three of them - have already, and recently, been adapted for the screen in a Swedish/Danish co-production most notable for introducing the world to Noomi Rapace. It's a surprise to see Fincher reinterpreting another director's work, especially with that work fresh in audiences minds, having dominated the world cinema scene somewhat in 2009 and 2010. Fincher and screenwriter Steven Zaillian have argued that this is not a remake so much as it is a fresh cinematic take on Larsson's novel, but whether you buy in to that argument or not, it has bone deep problems.

Having - rightly - determined that this story, given the historical background, is quintessentially Swedish, Fincher has retained the original setting of Hedestad in Northern Sweden, but has his international cast speak English. This is often something that gets on my nerves. If a film is set in a specific place, if it is about people from there, if it deals with the culture and history of that place, then surely it should be in the language that belongs to that place. The issue here is exacerbated by the extremely mixed bag of accents, which range from Rooney Mara's brave and largely successful film long attempt at an authentic Swedish tone to Daniel Craig's almost rude lack of effort, which almost feels like he's sticking two fingers up at Fincher and the audience and saying 'you fuckers are lucky I showed up at all, that's all the effort I'll be putting in'. This means that while Fincher, ever the visual master, exploits every bit of the stark and wintry beauty of his locations, the film never really has a firm foothold in the world - it feels muddled, not specific.

Credit where credit is due. Fincher and cinematographer Jeff Cronenweth definitely make this telling of the story more viscerally and identifiably cinematic than Neils Arden Oplev's relatively visually pedestrian 2009 effort. Fincher know exactly where to place a camera; his shots feel incredibly designed, but they communicate story in themselves, and many of his films would work for long periods with the sound off. This is an impeccable looking film, made up to within an inch of its life, not a hair out of place. That said... this is also one of the problems here, for a film that should be rather down and dirty in a lot of its scenes, Dragon Tattoo is often too perfectly poised, I felt this most in the film's two shocking rape scenes. Fincher doesn't shrink from the violence or the violation, but somehow the cruder technique of the Swedish film felt more viscerally upsetting to me set against the cinematic perfectionism on show here.

The cast is generally fine, but again the comparisons with the Swedish film don't do them many favours. Most seem as if they are pretty much like for like swaps, Robin Wright for Lena Endre, for instance, Wright is fine casting as Erika Berger, but she doesn't do anything that would justify casting her over Endre besides talking in English. The re-casting does come good in one case, Stellan Skarsgaard should quite clearly always have been Martin, and he easily exceeds Sven-Bertil Taube's performance. Unfortunately the casting and acting come unstuck in some important areas too. Daniel Craig is an actor I've never really understood people's enthusiasm for, I've only ever found him effective as Bond (and then only when he's in robotic killing machine mode, when has to emote it just hurts) and here he's as lackadaisical and disengaged as he always seems, sleepwalking through the role of Mikael Blomkvist in another monotone performance (which is also, as noted above, utterly unencumbered by a Swedish accent), he seems less like a crusading Swedish journalist who just lost everything than he does a British businessman on a notably shitty holiday. He's also, frankly, too much of a movie star. Michael Nyqvist's rumpled Blomkvist seemed much more real (which, to be fair, is unlike the book, which characterises him as an irresistible permashagging superjourno)and was, therefore, much more engaging.

Of course, the one thing you have to get right when adapting The Girl With the Dragon Tattoo is the titular Lisbeth Salander. The original film had best of all worlds, making Lisbeth just a bit more real than she is in the book (where, one suspects, she's written as Larsson's particular sexual fantasy) and having her played by the extraordinary Noomi Rapace, in a barnstorming turn that signed her ticket to Hollywood. Casting wise, Fincher does reasonably well, it's in the writing that this depiction of Salander fails. When Salander meets her new guardian, who is about to sexually molest her, he says that she is sexy when she's surly, and in that moment the film diagnoses its own biggest flaw; Salander is surly. In the book and the original film there is an ever present sense of danger about Salander, as if a single wrong word can set her off like lighting a fuse to a stick of dynamite, that's absent here, and replaced with a surly character, who the film proceeds to warm up much too quickly. The prickly relationship with Blomkvist, which continued even after they slept together, is largely swept under the carpet, the rough edges are smoothed away to leave a character who feels like she's been chipped away at to make her a little more palatable for a mainstream audience. 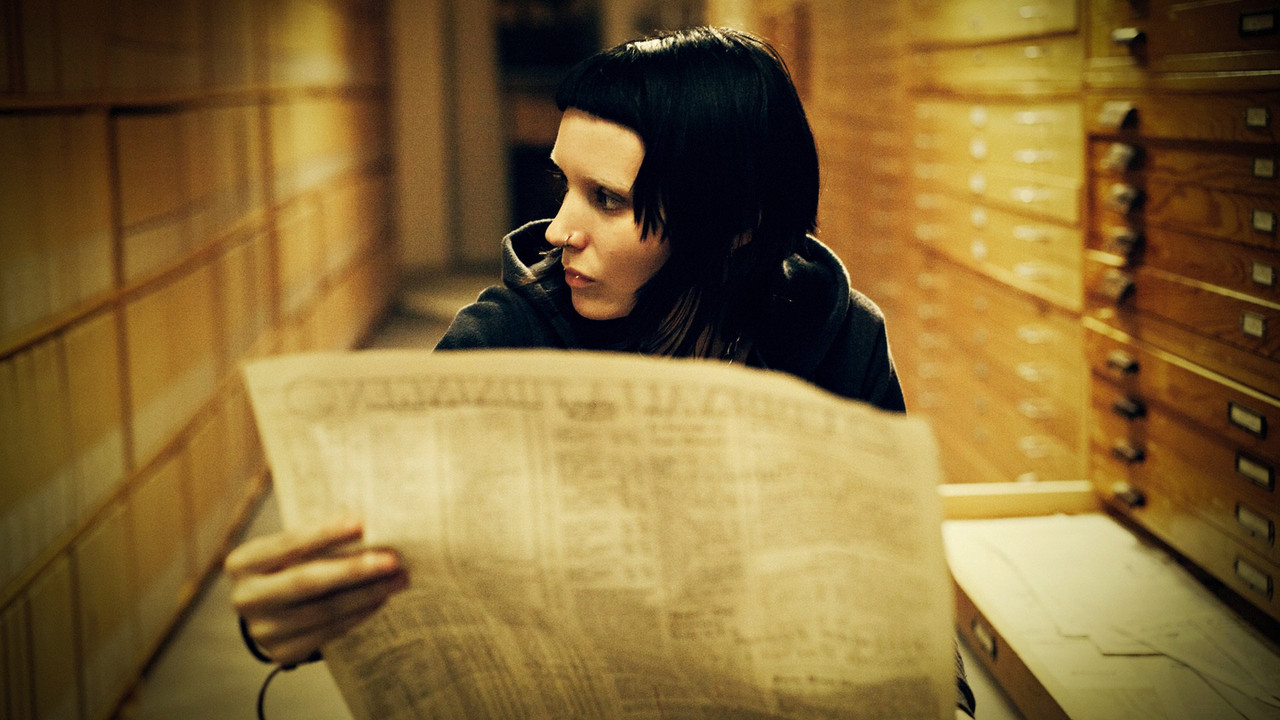 The last time I wrote about her I was very, very rude about Rooney Mara (and no, I won't be taking anything back), but she does well here; she totally commits to the part, changing her face and her body, dyeing her hair and eyebrows and getting extensive body piercings. She's working extremely hard, and that, again, is really the problem. With Noomi Rapace she just walked on screen and owned it, that's never true of Mara, she always seems as slight as she is, and never has that screen searing charisma that powered the original film. The thing is, it's hard to blame Mara for that, because the depiction of the character is so much slighter than it was previously. Fincher has retained the character's physical nakedness, but forgotten the emotional nakedness.

While they run to a similar length (at least in their big screen versions, the Swedish film also exists in a 3 hour extended cut which I'll be reviewing soon), this Girl seems to move more slowly. The details of the investigation slot nicely into place, and there's some welcome extra background about Salander's relationship with her first guardian, but the film just feels baggy in a way that the previous one didn't, even with repeat viewings. Zaillian's alterations to the ending are also neatly done, but ultimately the changed conclusion doesn't really add or take away anything from the story, it's a different angle, really no better or worse.

The one area in which this film does completely exceed the Swedish film is in its soundtrack. Not only is the effects track as meticulous as you'd expect of Fincher, but the musical choices are little short of inspired. Social Network composers Trent Reznor and Atticus Ross supply the score, mixing dark industrial beats with strings to fine and creepy effect, they'll likely pick up a second Oscar in as many years (though my vote would be for The Chemical Brothers' Hanna score), song choices are also brilliant, with one scene ensuring - mercifully - that Enya's Orinoco Flow will never again sound the same, and the Karen O featuring cover of Led Zeppelin's Immigrant Song driving an opening title sequence that is, for good or for ill, the single most exciting thing in the film.

On the one hand, as a fan of the Swedish film and especially of Noomi Rapace' performance, I was never really expecting this film to be anything but an expensive exercise in redundancy, but even with that in mind, given the talent involved, this has to go down as a major disappointment, because if anyone could stamp authority on the idea of remaking this film in English then it was David Fincher, and he's failed to do so. If you really, REALLY hate subtitles then this is proficient enough to be recommendable, but if you've seen, or would consider seeing, the Swedish film, then there is no reason to see this at all. It strikes me as a staggeringly wasteful use of $100million.
★★☆☆☆
Posted by Sam Inglis at 23:04