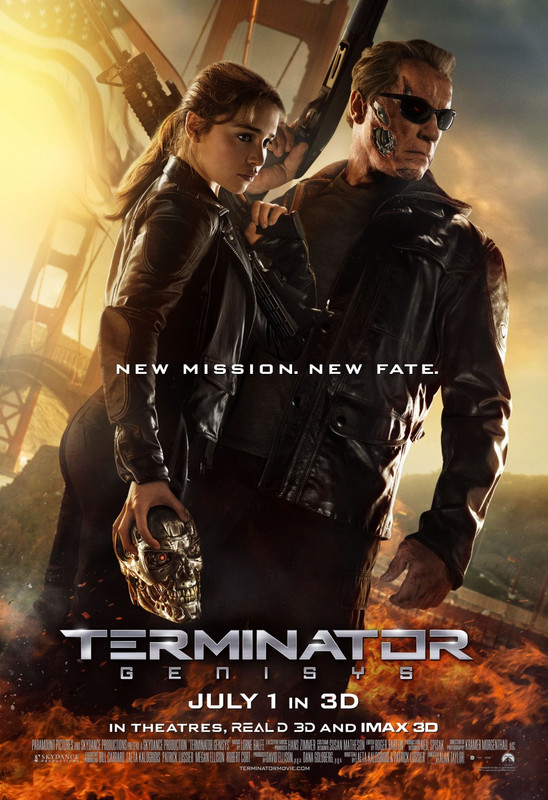 I'm a big fan of the Terminator franchise. Yes, it stumbled with the McG directed Terminator Salvation, but the first three films are all excellent action blockbusters. I'm even a fan of the TV series, The Sarah Connor Chronicles, which expanded the mythology of the franchise interestingly, and should have been allowed to stretch its legs for a few more seasons.

I've been rooting for Terminator Genisys. Yes, the title is beyond idiotic, but Arnold Schwarzenegger's post-Governator leading roles, have largely been underrated, and given a welcome kick of energy to the geriaction trend. Let's just say that this experiment with optimism didn't pay off.

For all their time travel related convolutions, the  first three Terminator films are pretty simple when stripped down to their constituent parts. Each is a relentless and focused chase movie in which the heroes are on the run from a threat that perpetually catches up to them. This powers the films through any timeline confusion, keeping us from dwelling on the paradoxes of the plotting. The same can not be said of Terminator Genisys.

The initial Terminator trilogy, while they all do it well, tell essentially the same story; that of an attempt by Skynet to destroy John Connor before he can become the leader of the human resistance. In attempting to reboot the series, Genisys tells that story again but does so like a kid at a pick n mix counter; grabbing handfuls of ideas from the previous films, then throwing them all in a sack with scant regard for what they'll be like when taken together.

After leading the final attack on Skynet John Connor (Jason Clarke) sends Kyle Reese (Jai Courtney) back to 1984 to counter the threat of the Terminator that has been sent back to kill his mother Sarah Connor (Emilia Clarke). When Reese arrives in 1984 he finds it very different. In this timeline Sarah has been raised by a Terminator that she calls Pops (Arnold Schwarzenegger) and is already the trained badass we knew in Terminator 2 (well, sort of). Prompted by 'memories' that Reese saw during the time travel process, he and Sarah travel to 2017 to stop a programme called Genisys - Skynet, in the form of an app - from being launched and prompting Judgement Day.

For about 15 minutes, Genisys isn't completely terrible. Yes, the future war sequence that opens the film is just one more working over of the iconography of James Cameron and, to a lesser extent, Jonathan Mostow's films, but while it lacks personality and begins to demonstrate how bad the performances of Jason Clarke and Jai Courtney are going to be, it is at least competent, and doesn't rip off the earlier films with quite the zeal we'll soon see. This faint praise counts as the film's high watermark.

As soon as we land in 1984 Genisys' myriad problems begin to come into focus. A laughably unconvincing ersatz Bill Paxton, heralds the arrival of the original T-101 (Arnie, with  CGI and body double assist). The film then proceeds to throw up its hands, say 'fuck it' and just start chucking everything it can at the screen. Here's old Arnie fighting young Arnie. Here's Byung-Hun Lee as a T-1000. Here's badass Sarah Connor telling Kyle to “Come with me if you want to live”. Here's a riff on T2's steelworks action scene. All of these things sound cool, and yet every single one of them lands with the same kind of thud Reese makes when he falls into 1984. The fight between the Arnies is badly shot, dully choreographed and the CGI frequently explores the uncanny valley. It's also extremely short and ends in a way that retrospectively helps neuter the threat from the original film. Byung-Hun Lee is a great and charismatic screen presence in South Korean cinema, but he's been poorly served by his Hollywood parts, and this one is no different. I can buy him as a fast, coolly threatening, stealth unit equivalent to Robert Patrick in T2, but there is no time to give him a character, instead this fine actor is reduced to being a vehicle for special effects that were done better, with extensive physical elements, 24 years ago. The chase with the T-1000 leads into the riff on moments from T2's brilliant ending, but it botches the homages, such as a moment when the T-1000 impersonates Reese (I think Courtney is trying to play one side of this scene more robotically, but it's tough to tell).

The first appearance of Emilia Clarke's Sarah Connor brings us to the issue of casting. Linda Hamilton's take on the character, a performance that improved massively in the second film, is iconic, but Lena Heady also delivered an impressive take on a tired warrior in Sarah Connor Chronicles. Clarke is playing a character who should be most closely related to the Sarah of Terminator 2: sinewy, tough, taciturn, and she's all wrong for the part. Heady, were she still young enough to play 20, would have worked here; she has always radiated toughness. Clarke doesn't, she's too soft, she looks too much like a model, and she's unconvincing with a gun. The problem goes beyond the look. Clarke evinces none of the ruthlessness so integral to Sarah, and rather than direct her anger at her lack of choices outward in fight and grit, she seems to turn them inward. It feels not so much a revision as a betrayal of one of the female icons of action cinema. 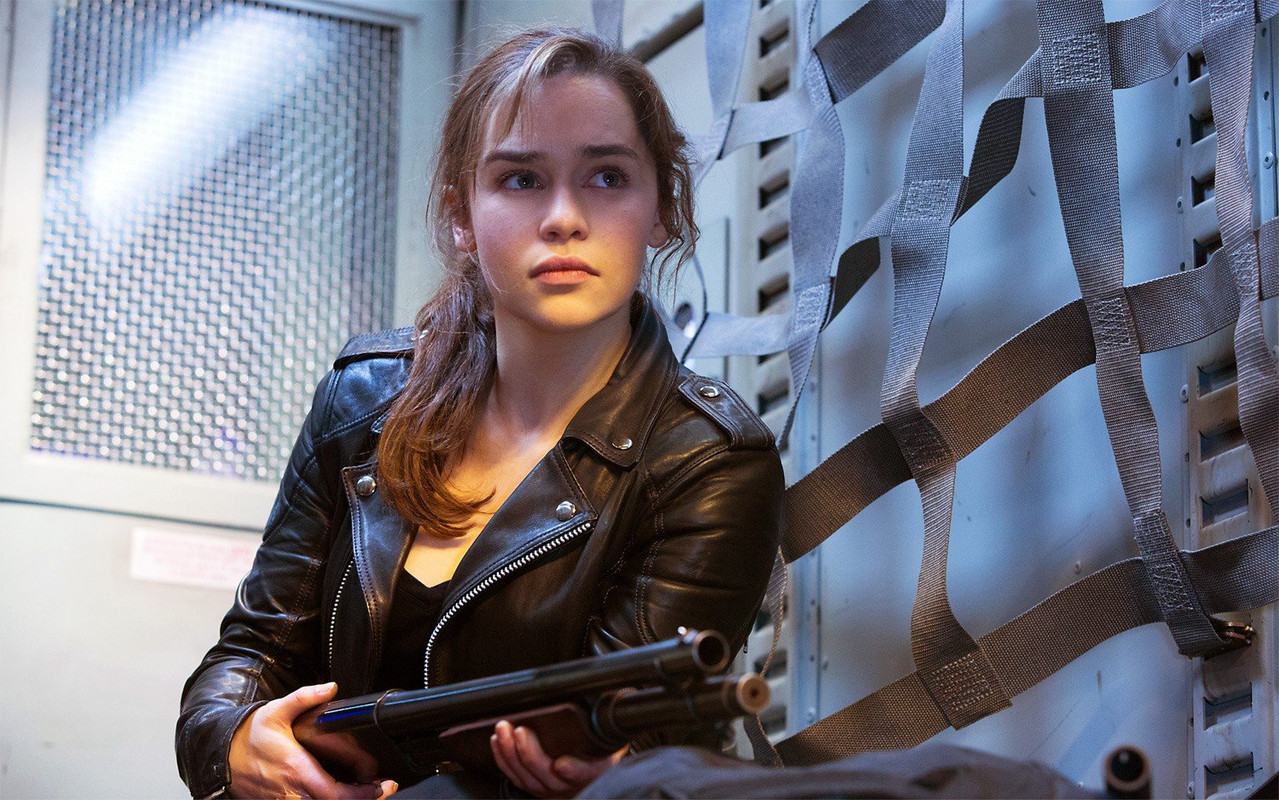 Even as he returns to his most iconic role for the fourth time, even Arnold Schwarzenegger manages to appear miscast to a degree. Now nicknamed 'Pops', the process of turning the Terminator from death machine into cuddly house pet is complete. This is far and away Schwarzenegger's worst performance as a Terminator, he seems to be working his way through the material, rather than actually engaging in creating a character. To be fair, this is also the fault of the staggeringly terrible screenplay, which replaces the idea of giving the Terminator character traits for making him an exposition machine, and pretending that combining that with having Reese joke about finding a switch that stops the machine talking like that will suffice for personality for both of them.

So far, Arnold's late period films have dealt well with his now more limited capacity to do action, but here he seems tired, his action beats are notably shorter and slower, his CGI assists more numerous. The most painful moments come, predictably, in callbacks to the previous films. Remember the charming moment of John teaching the Terminator to smile in T2, and the wry way it was called back later in the film? Well, here we get to see it bastardised three times, each gag, seemingly impossibly, less funny than the last.

As for Jason Clarke, it's not so much that he's miscast as it is that nobody could possibly play his role, such a complete clusterfuck of a plot device as it becomes. As has been thoroughly spoiled by the trailers and posters (much to director Alan Taylor's consternation), John is transformed into a new type of Terminator and acts as the film's main antagonist. Clarke is laughably terrible in the role; hi-tech as the nanobot type structure of this Terminator is, he's also an incredibly banal kind of evil. The screenplay is trying to take on some Invasion of the Body Snatchers ideas with his character, but it's so hamfisted and underexplored that it never pays off. Ultimately he's just one more big bad. In T2 this might have worked as a plot device, but because the casting and performances are so out of whack the personal stakes that should exist simply don't pay off.

The screenplay is fundamentally broken. The timelines are beyond confusing, and shoot holes you could drive a truck through in even the baffling internal logic of the franchise. This is especially true of the 'memories' Reese has while time travelling. The film almost breaks itself in half bending over backwards to explain them, but that doesn't change the fact that they are nothing more than a magical expositional cheat. About sixty percent of the dialogue in this film is people explaining the plot to each other, and it still makes no fucking sense. This also destroys the pacing. The first three films are all about relentless forward motion, I never got that sense here. The characters blunder from one timeline to the next. The pursuing threat is absent for much of the film and weak for its first half (and stupid for the second).

All this said I might have given Terminator Genisys a mild pass if the action scenes could save it. Guess what? The action is awful. It's yet another load of weightless CGI, with things getting smashed, but little visible consequence. Look at the nuclear destruction sequences in T2 and in this film. In T2 playgrounds burn, people are swept away, and a beloved character is incinerated before our eyes. In this film, some CGI buildings get blowed up real bad. This is surely to preserve a 12A rating, but it lessens the impact of the moment on a human level. In the previous films the characters, even Arnie's Terminator, are bruised and battered towards the end. Here there's an odd dynamic. Arnie is badly hurt by the end of the film, but the humans, despite being in a bus crash that should have turned them into pate, have barely a scratch on them, and certainly nothing that badly hinders them. Again, pursuit of a rating over impact. 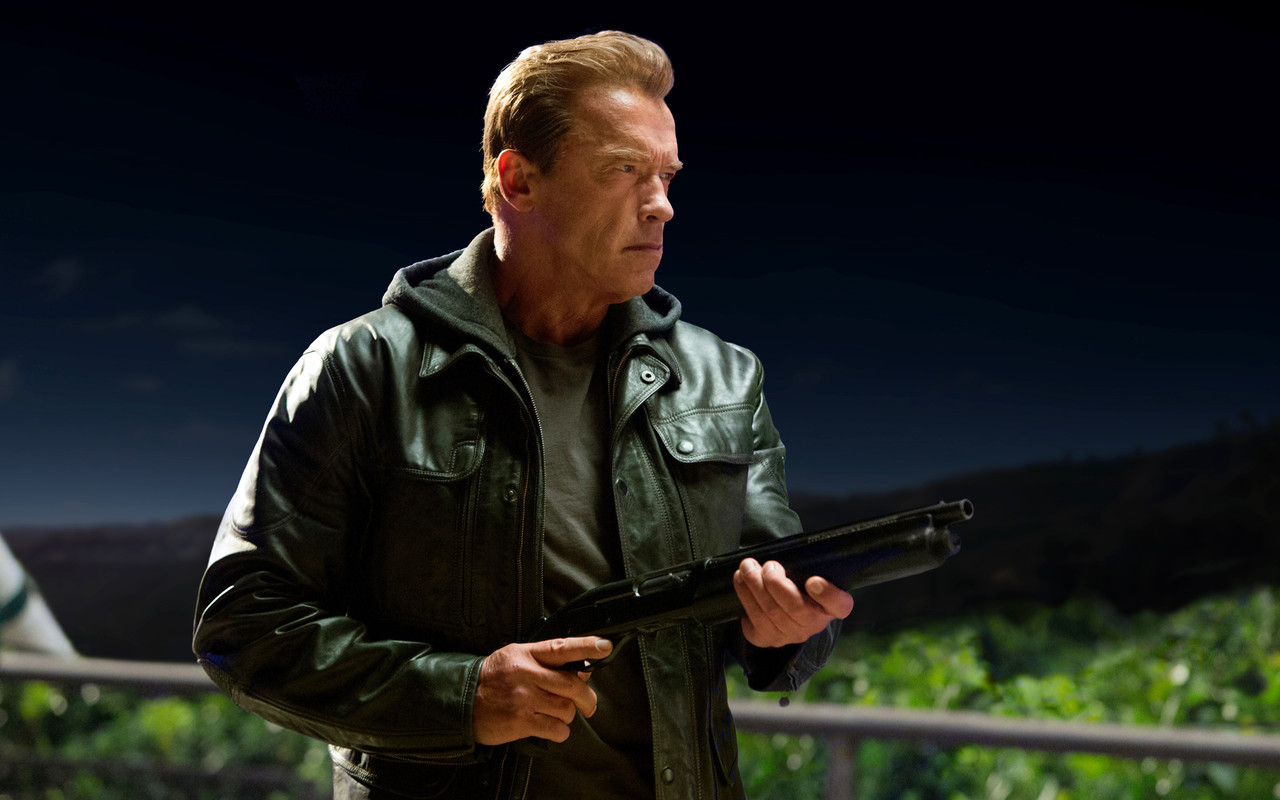 Even the moments of action that should be great – the massive bridge setpiece for instance – are directed with a generic and personality free hand by Taylor and are undermined by some very silly moments. None of these is more hilarious than the sight of the T-101 bouncing as he falls from the school bus he, Sarah and Reese are escaping in on to the bridge, he appears to be made of rubber, all the moment lacks is a 'boiiiing' sound effect.

And yet, none of these things is the film's miserable nadir. As it reconstitutes bits and pieces from the first three films, feeling like the result of a pitch meeting where the mission statement was “what if we remade the Terminator films, but, get this, made every good idea into a shitty one”, it arrives at a combination of the endings of T2 and T3. Astonishingly, it manages to do so with none of the emotion of T2, and none of the impact of T3. What Skynet destroys in this film is not the world, but everything good about the Terminator franchise.

Terminator Genisys is worse than bad, it's a disgrace. It is easily the worst new film I've seen in 2015. It makes Salvation, already pretty awful, look like an unacknowledged classic, and it surely, at least for now, marks the depressing low of reboot culture and the cynical plundering and retrofitting of pop culture memory.
★
Posted by Sam Inglis at 14:24