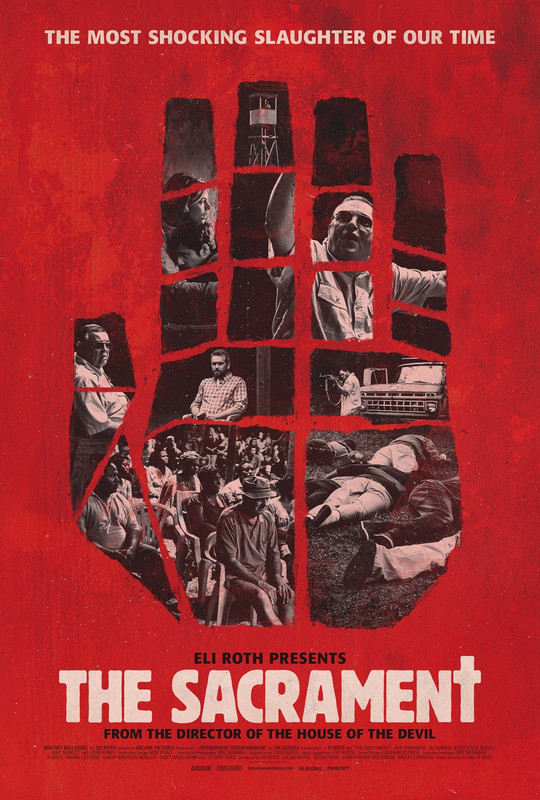 Ti West has become a fan favourite in the horror community, with House of the Devil and The Innkeepers both generating a substantial fanbase.  I'm not among that fanbase.  To date I just haven't got on with West's pacing, which tends to be agonisingly slow, nor have I been scared by any of his films.  Still, the fanbase remains, and when people I trust about horror tell me someone is worth paying attention to I'll generally give them at least a few films to engage me.  The Sacrament was probably the last chance I'd be giving Ti West - call it three strikes and you're out.

The film is clearly based on the Jonestown mass suicide.  A photographer (Kentucker Audley) is invited by his sister (Amy Seimetz) to visit her at the retreat where she has recently detoxed from a drug addiction and come to follow a charismatic religious leader known as Father (Gene Jones).  He goes, taking two friends (AJ Bowen and Joe Swanberg) who are making a documentary for Vice.

For the first time, West's pacing worked for me here.  The first half of the film is slow.  However, unlike House of the Devil, which felt brutally overstretched as its main character walked around an empty house for more than half an hour, The Sacrament spends its time interestingly.  For the first half of the film the documentary crew explore the commune, interviewing people, finding them happy and generally welcoming.  This is perhaps to be expected, but West, without tipping his hand too early, does give a sense of growing unease about the place and the smiles begin to feel like rictus grins.

If you know anything about the case that the film is based on, or even if you don't, there is only one way The Sacrament is going to end, and it does lurch into predictability in its second half.  The scenes are well staged.  The mass suicide is credible and disturbing.  What's slightly less credible is how quickly things seem to slide to this point.  In less than 24 hours the community goes from a fully functioning collective to drinking the (literal) kool aid.  It's not the followers, their actions I believe, it's the leadership that seems to make an extremely sudden and, frankly, not especially well founded turnaround.

These issues are mitigated by the quality of the acting.  West is part of the group of mumblecore filmmakers who often turn up in each other's films, and thus they seem to have an easy working relationship.  That can go either way, but here it seems to result in an easy naturalism from all concerned.  Bowen and Swanberg are strong as the journalists, but two other performances dominate the film in very different ways.  The first is Amy Seimetz; detailed and quietly credible throughout as Caroline, she lets her character's brainwashing become clearer with each scene up until a chilling moment in the third act.  Gene Jones is just as good as Father; charismatic and friendly in a way you believe would draw vulnerable people to him and aren't surprised hides danger.

What the acting can't mitigate against is some of West's filmmaking choices, including one stupid oversight that creates a huge continuity gap.  The found footage structure is less problematic than usual, but doesn't entirely work.  The fact it looks somewhat professional, even in fraught moments, is given context by the fact that within the fiction it's being shot by professionals.  We also know what we're watching; the edited version of the Vice piece, so cutting between cameras makes sense.  Except that when the film ends it's clear that at least one of those cameras doesn't leave the commune, at least at the time the credits roll.  That's a big oversight, and among other contrivances it undermines the film pretty badly in retrospect.

The Sacrament is probably my favourite of Ti West's films to date, though that's saying less than I'd like.  For 45 minutes I liked it a lot, unfortunately it becomes rote in its second half and there are problems with the construction.  However, the performances are always strong, and there's enough here that's good to make it worth a look.
★★★ 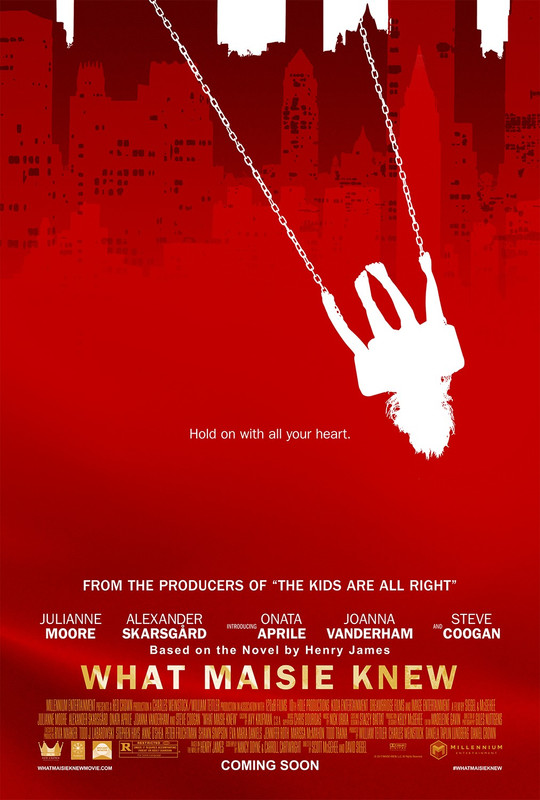 I watch a lot of coming of age films, so I see a lot of adult ideas, experiences and themes filtered through young characters.  Few do this as successfully as What Maisie Knew.  Based on Henry James' 1897 novel, the film is about six year old Maisie, whose parents (Juilanne Moore and Steve Coogan) are in the middle of an acrimonious divorce.  Busy with their work (She's a rock star, he an art dealer) neither has much time for Maisie and her care ends up being passed to her parents new younger partners (Alexander Skarsgård and Joanna Vanderham).

What sets What Maisie Knew apart is its dedication to its title, or perhaps more to the spirit of it.  What Maisie truly knows and understands about the world of the adults around her is not always clear, the film is more focused on what Maisie experiences and on trying to put us inside that experience.  It seems that every choice made by directors Seigel and McGehee is designed to reinforce that experience.

The camera, for the most part, sits low to the ground, not looking up, but instead often cutting off the heads of the adult characters, forcing a six year old perspective on us, even when we aren't looking through Maisie's eyes.  The sound is reactive too; muffled when Maisie is tired, pre-occupied or some distance from the adults.  What this, and only seeing the story of the marriage breakdown and the other relationships through moments that Maisie witnesses, does is force us to try to piece together our understanding of the events much as she does.

The film's greatest asset is its cast and in particular Onata Aprile's performance as Maisie.  Aprile gives one of the most unaffected performances I've seen by a child in a long time.  Her expressions are often tiny, but huge moments are played just on her face, and she communicates volumes about what Maisie understands and how she feels about things with almost imperceptible moments.  Just look at her when she first discovers that her nanny (Vanderham) has now moved in with her father.  The way Maisie processes this and, over a couple of scenes, comes to understand the change in the various relationships is beautifully played.  With her open face, soulful eyes and bright personality, Aprile is a real find and she carries the film incredibly well.

The adults also acquit themselves well, though I'm not sure I buy Julianne Moore as a rock star (especially not when the songs we hear are Kills tracks where she subs for the brilliant Alison Mosshart).  Moore and Coogan are convincing as the couple whose relationship has turned toxic.  Both are unsympathetic and at times they both treat Maisie poorly, but the film doesn't simplistically label them terrible people, just people who have become too wrapped in themselves.

Much more likeable are the new partners, Margo (Vanderham) and Lincoln (Skarsgård).  These roles are the one place where the screenwriting feels a bit familliar.  Margo is, while extremely well played by Vanderham, a bit one dimensionally lovely and while Lincoln has more of a journey it's obvious early on where these two are going to end up.  However, it's hard to mind, they're both excellent and play off Aprile with such lightness of touch.  You feel the affection that Maisie has for both of them and while what ultimately happens is expected it also has an emotional tug to it.

What Maisie Knew brilliantly examines adult issues through a child's perspective, but manages not to reduce the complexity of either the events or the feelings they throw up.  It took me by surprise and I highly recommend it.
★★★★
Posted by Sam Inglis at 23:04