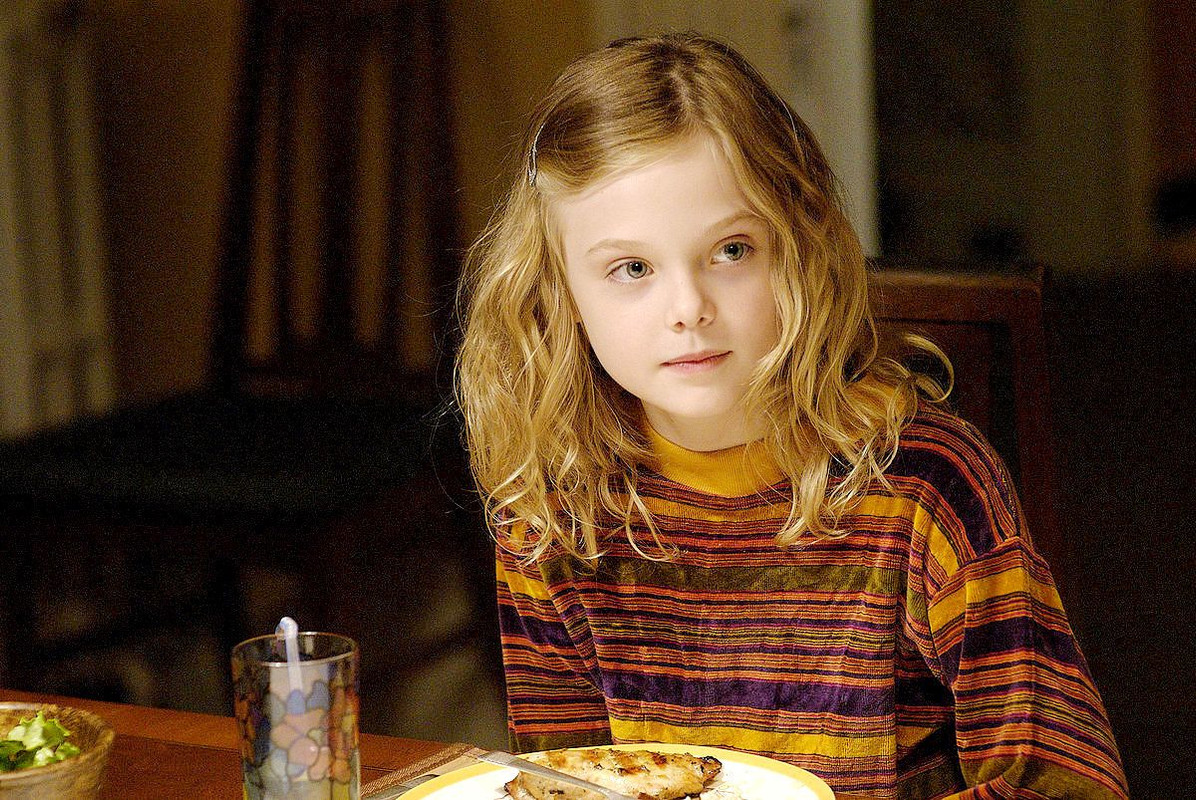 When I put together a list of my favourite actresses currently working, I put Elle Fanning in among the other, much more established, names.  She was just 15 at that time but already had turned out a long string of impressive performances.  I'm surprised that it took me this long to get around to this film, which gave Fanning her first proper leading role.

The film is a mixed bag.  It can be affecting, but it's also prone to being horribly treacly, and drifts further from credibility as it runs on, in all but one aspect.

Fanning plays Phoebe, a nine year old girl who can't seem to follow the rules at school or at home, and who often finds herself doing illogical things (jumping in a particular pattern, for example), because that she believes something will go horribly wrong if she can't get that specific action 'right'.  Her parents (Felicity Huffman and Bill Pullman) initially think she's just being a kid, but it increasingly seems that something deeper is wrong, and that Phoebe's participation in the school play is the one thing that helps her.

At the film's centre, Elle Fanning is little short of sensational.  She has always appeared to have an uncommon understanding of the complexities of her characters, and there is always a lot going on in her performance as Phoebe.  She talks about finding herself doing things without wanting to, even things that she hates having to do, but honestly the lines are barely needed, we can see it all in her physicality.  She's also great in the scenes where Phoebe is acting in Alice in Wonderland, giving a true sense of the weight being lifted off her.

Unfortunately, nothing around the central performance has anything like Fanning's level of consistency.   Daniel Barnz' screenplay is strong when it comes to Phoebe and her illness, giving her some powerful dialogue, but the fairytale trappings and Patricia Clarkson's drama teacher are just awful.  Towards the end, Barnz simply abandons recognisable human behaviour in his writing of the adult characters, and even actors as good as Huffman, Pullman and Campbell Scott can't help him.

Phoebe in Wonderland is Elle Fanning's show all the way and, despite its many problems, is worth seeing just for her remarkable performance.
★★★ 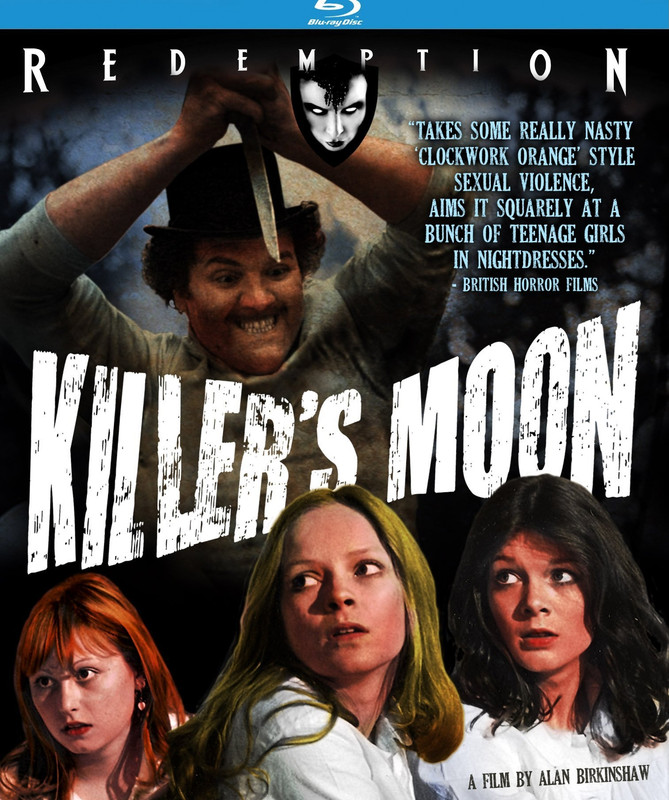 I wasn't expecting a huge amount from Killer's Moon.  I thought it would be something I'd enjoy simply as a fun, sleazy bit of the history of English exploitation cinema, which would have been fine.  What I wasn't expecting was something with as many ideas and as many layers as this surprising film has.

The story appears simple.  A group of schoolgirls on their way to a choir competition are stranded in the countryside for the night when their bus breaks down.  They find a place to stay, in a hotel that is yet to open for the season.  Unfortunately some less welcome guests also find their way to the hotel; four escaped mental patients on an LSD treatment, who have been told to purge their every violent whim, safe in the knowledge that what they are experiencing is a lucid dream.

The structure is pretty skeletal, but director Alan Burkinshaw has fun with it.  The early lost in the woods scenes work quite well, establishing (broad) characters and giving us a few creepy moments.  At the same time, cutaways establish the impending threat of the escaped patients, giving the scenes in the hotel a sense of build up, rather than just marking time.

The screenplay has its problems, particularly a regressive 70's attitude to some of the film's sexual violence (one girl comforts another by saying "at least you were only raped"), but additional dialogue by Fay Weldon (the director's sister) adds some wit.  The best line, however, comes in a creepy exchange between two of the patients "Do you always dream in colour?" "When I can.  I like the flesh tones."

The second half of the film is marked by two things, its nastiness and its uncommon amount of ideas.  The film's sexual violence is pretty brutal, and made to feel more so by the fact that the actresses playing the schoolgirls look very young indeed.  The nastiness of the film is also intensified by its ideas, first by the fact that the patients are so often gleeful about what they are now allowed to do, because this is a dream and because, as they start to figure out that they are not dreaming, their attitudes don't change.  The killers' observations of dream and reality manage to straddle a fine line between creepy and funny throughout, giving the film a peculiar atmosphere all its own.

Not everything works,  The two male campers who help the girls escape are little more than convenient props, and the film would be more interesting if the girls had to battle the patients by themselves.  There are also some problems with the camerawork, while Burkinshaw's angles and editing are fine, the choice to shoot almost every exterior scene in less than convincing day for night means that the film doesn't look as strong as it might have.

Overall though, Killer's Moon was an intriguing surprise; a film smarter, funnier and more disturbing than I had expected and, if you can forgive a few clunky moments, a minor exploitation classic.
★★★★ 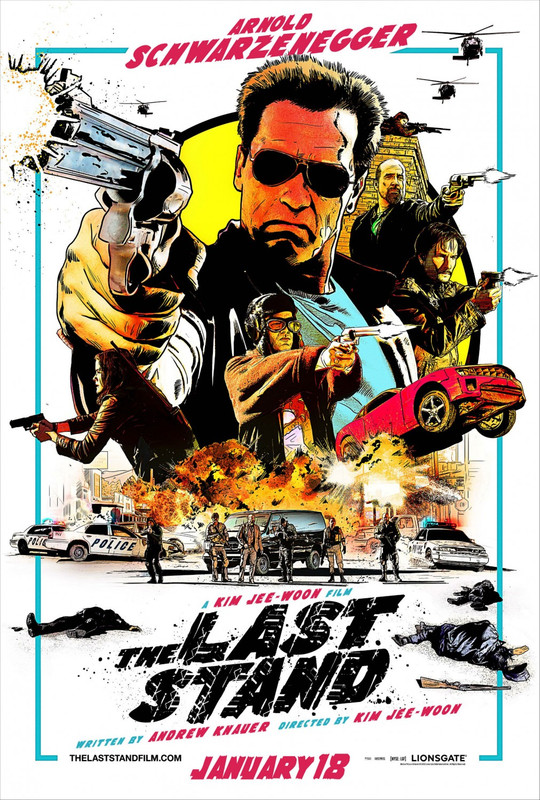 There are actors, there are movie stars and there are people who combine the two.  Arnold Schwarzenegger is a movie star, for many of us, myself included, he always was, making his first impact with starring vehicles like Conan the Babarian or The Terminator.  Then, after decades of success as a movie star, he became Governor of California (as one does).  With that job out of the way, he returned to cinema, with The Last Stand marking his first leading role in the decade since the underrated Terminator 3.  Little had changed.

Arnie plays Ray Owens, the inexplicably Austrian accented sheriff of Sommerton a small town right on the border between the US and Mexico.  A drug kingpin on federal death row has escaped, and he may be aiming to cross the border by going through Ray's town.  This, needless to say, is not the best idea he's ever had.

The Last Stand is what it is, and it revels in the fact.  The idea is basically High Noon, with a long build up to the promise of a massive fight between Arnie and Eduardo Noriega as the cartel boss.  Of course that can only happen in the third act, so before that we have Forest Whittaker as the FBI agent on Noriega's tail and a small army, led by Peter Stormare with an accent even more hilarious than Arnie's, building a bridge in order to allow Noriega to cross into Mexico.

The action is largely confined to the final third of the film, but there's a great shootout with Stormare and his mercenaries around the halfway point, in which Arnie gets to show that he still has all the badassery of his earlier films.

Between action beats, Schwarzenegger shows an admirable willingness to acknowledge his age without playing too heavily on it for gags.  He's not the best actor in the world, but there's a sense here of a guy who's seen a lot, became tired of it, and now wants to do some good while essentially having a quiet life.

If there's a sleepy small town feel to Sommerton, Kim Jee-Woon injects pace and action into the chase movie that leads up to the film's final confrontation.  Noriega has fun as the adrenaline junkie cartel boss, avoiding the FBI in a supercar.  This part of the film also gives us a great action scene, as a police barricade is decimated by Noriega's goons.

The third act is where it all comes together.  An energetic and fun supporting cast, including Johnny Knoxville, Luis Guzman and Jamie Alexander allows Arnie to share the load  in the bigger action scenes, but Schwarzenegger is still obviously doing almost all his own action and appears to be enjoying himself doing it.  The showdown in Sommerton is a fantastic sequence, with Kim keeping the geography of the action intelligible and finding moments that are both brutal and funny (the flare gun).

The Last Stand is, by design, a throwback.  Is it a return to Schwarzenegger's very best form?  No, it's no Commando, but it recaptures the feel of 80's and 90's action cinema without being a slave to nostalgia and, ultimately, it's just a whole lot of fun.  Never change Arnold.
★★★★
Posted by Sam Inglis at 11:17