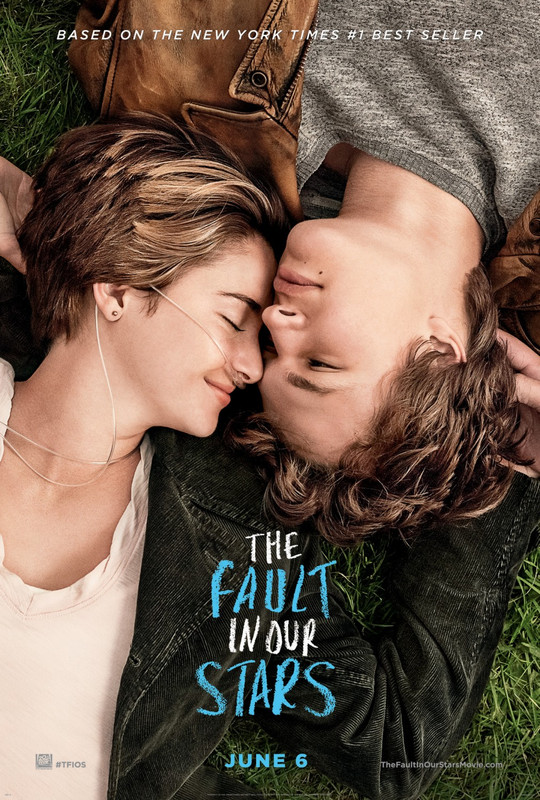 I saw two films over the weekend that were, at least in parts, attempting to make me cry.  At the end of Jeux Interdits I was extremely emotional and wiping tears away, but by the time that mawkish YA adaptation The Fault In Our Stars had a measure of mercy and stopped I was simply relieved that it was over.

As the film opens our main character Hazel (Shailene Woodley) tells us, almost apologetically, that this is not one of those stories in which hardship results in "beautiful people learning beautiful lessons".  I wonder which story she's talking about, because that is exactly what this film is.  Hazel is 17 and she has terminal cancer, but thanks to an experimental treatment she's managing to stay at least a little way from death's door.  At a support group she meets cancer survivor Augustus (Ansel Elgort), who immediately begins to pursue her.  The two fall in love, bonding over the work of a reclusive author and facing up to an uncertain future.

We live in an age in which most mainstream, studio backed, cinema only seems interested in engaging our eyes and our ears, so on the one hand it's a relief to see a film like The Fault In Ours Stars, which is attempting to engage its audience on an emotional level, getting a major release.  On the other hand, it's much easier to engage an audience viscerally than speak to their emotions.  For instance, I love Jackie Chan movies, they're fun and exciting and it's amazing to watch his inventiveness with props, but do I worry about his character, do I find myself engaged in his relationships?  No.  The point is that, at least for me, an emotional charge in a film comes from the feeling that these are believable people that we're watching, if I don't feel that there is an honesty at the heart of the film and the characters then they just become props for the story to move about.  This is what happens here, for much of the running time Hazel and Augustus aren't so much characters as they are pointy sticks with which the film repeatedly prods you to see how long it will be before you start crying.

This is especially disappointing given the pedigree of The Fault In Our Stars.  Screenwriters Michael J Weber and Scott Neustadter's last film was The Spectacular Now, which I adored and called the best American teen movie of recent years.  This is quite the drop off.  The thing that made The Spectacular Now so special for me was that at the centre of it there were two characters that I recognised, they felt like real people. Real people with real and complex problems.  Real people who fuck up, and might not stop fucking up after the film ends.  This is where we come to what I hated most about The Fault In Our Stars (bar a few specific scenes that, trust me, we'll get to).  The only thing wrong with either Hazel or Augustus is their cancer.

Augustus in particular is, as written, almost obnoxiously perfect, he seems less a real person than the product of a focus group, custom designed to be the caring, clever, witty, boy who is interested in the girl who serves as the analogue for the teenage target audience.  He pursues Hazel doggedly, but completely unthreateningly and when the subject of sex comes up he's ever so charming about making it clear that he'd like to do it with Hazel, but not seeming to pressure her.  These are all perfectly admirable traits, wrapped in a package that, through happy genetic accident, is also classically handsome, but nothing about it rings true.  All of Augustus' dialogue is much too considered.  It plays as exactly what it is; three older men (the third being original novel writer John Green) painstakingly crafting the best, most articulate, version of their teenage self.  This falseness at the heart of Augustus' character is not helped by Ansel Elgort's performance.  His perma-smirking face gives off an air of eminently punchable smugness and because everything about him seems so calculated and so false he comes off as pretentious (an affectation of having an unlit cigarette as a metaphor) and sometimes a little creepy.

The problem is the similar with Hazel though less acute, because Shailene Woodley is so clearly talented that she manages to make a few moments play, the bits of her performance that are truly unbearable (two separate eulogies, for instance) are down to the screenplay.  The biggest problem with Woodley's character here is that she's essentially The Spectacular Now's Aimee, but with stage 4 cancer.  This parallel is never clearer than when Hazel and Augustus first talk and there is a beat for beat repeat of a charming moment from The Spectacular Now when Woodley has to react disbelievingly to being called beautiful.  It's the same moment, down to Woodley's inflection on "oh my god, no" but Hazel is so much less human as a character that even at this early stage in the film it rings false.  In that moment it feels like Aimee cut her hair and lost her personality.

Woodley's efforts may be in vain, but at least she turns up.  The only other performance that isn't either lifeless (Sam Tramell) or just plain awful (a surprise guest star) is Laura Dern's.  She has only clichés to play as Hazel's mother, but between her and Woodley they do, towards the end, manage to pull out the film's sole half decent scene.  That's something, not much, but something. 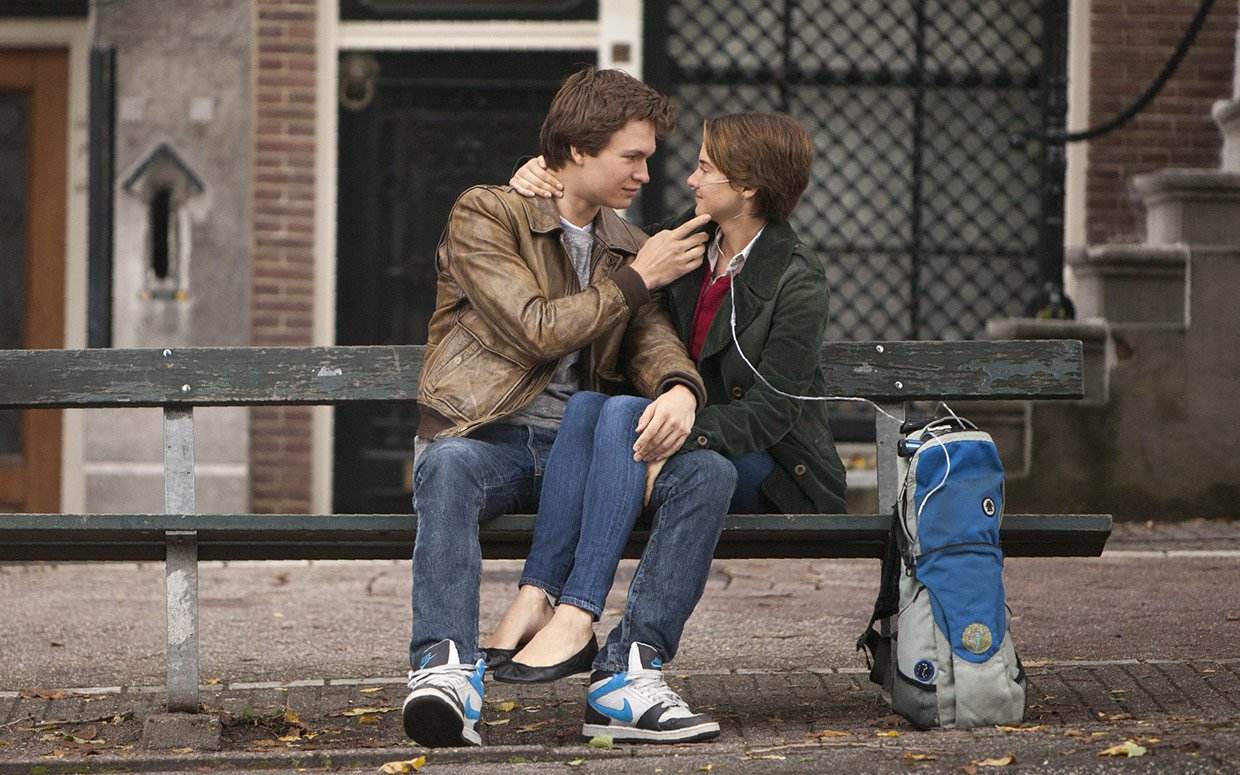 The Fault In Our Stars is dull, deadeningly false and filled with vomit inducing dialogue (a conversation about champagne, for instance) throughout, but it becomes offensively bad in its second half.  Hazel and Augustus are invited to Amsterdam to meet the reclusive writer they are both fans of and ask him questions about what happens after the end of his book.  This leads to a scene in the Anne Frank house which is so completely outside the realm of plausibility that it may as well take place in space.  I'm sorry, but I have to spoil this bit.  After arriving, with much effort, at the top of the Anne Frank house, Hazel and Augustus begin making out in the middle of the room.  You might think this would draw some disapproving glances but no.  EVERYONE APPLAUDS.  Seriously, this is a thing that happens.  At this moment I was no longer watching a story.  All I could see was making of footage of two actors making out in what, surely, is one of the least appropriate places in the world.  All I could think was whether anyone had said, 'you know, this might be a little insensitive, given what this place means'.  If I had even the slightest engagement with this badly staged and written torrent of trite and treacly bullshit it was now over, irrevocably.

The last 40 minutes or so are not quite so ugly as that scene, but they try, dunking your head in treacle over and over, finding several endings but refusing to stop until the film is confident that it has manipulated that last tear out of you.  Two notably awful moments are so utterly implausible that they seem to have teleported in from an alternate dimension, especially the reaction of one character to an incident when Hazel, Augustus and a friend throw eggs at a car.

I wish The Fault In Our Stars was the film it promised to be in its opening narration.  I wouldn't mind seeing a film that avoided the usual clichés of the cancer movie, that refused to sentimentalise its characters and their problems, that didn't end up being all about beautiful people learning beautiful lessons.  True, this film never offers much in the way of hope to its characters, but that's hardly radical and the presentation is as by the numbers as you could imagine.  The film it wants to be already exists, it's called 50/50.  It's not perfect, but it's a damn sight better, smarter and more authentically moving than this turgid piece of crap which is infinitely more impressed with itself than you should be with it.
★
Posted by Sam Inglis at 22:34