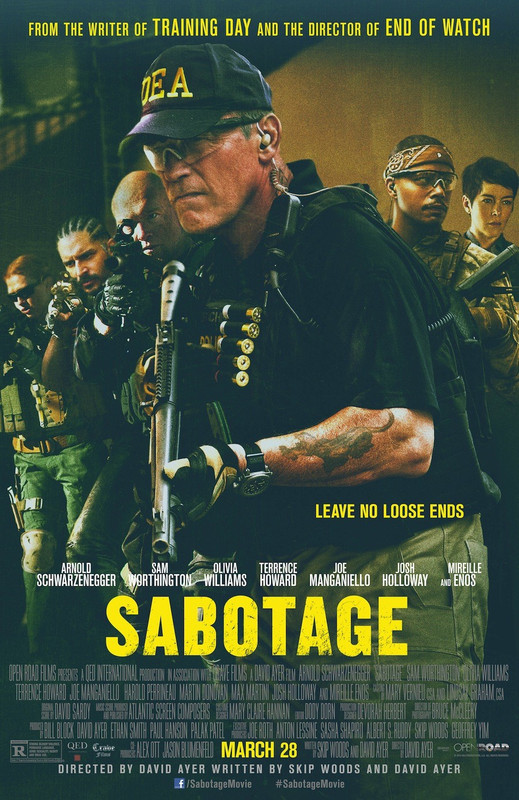 Director David Ayer has made a career exploring the blurred lines dividing opposing sides of the law.  In the past, I've found his films rather tiresome, especially for their juvenile use of profanity, which can make all of his characters sound the same, so I went into Sabotage with mixed expectations.  I was wary because I'm no fan of Ayer's, but intrigued because I have enjoyed both of Arnold Schwarzenneger's starring comeback vehicles to date and this seemed to offer him something slightly different.

Arnie plays John 'Breacher' Wharton, the leader of an elite team of DEA agents.  As the film opens Breacher and his team (including Sam Worthington, Mireille Enos, and Terence Howard) are taking down a safe house belonging to a Mexican cartel, in the process they steal $10 million, but when they return to collect the money is gone.  Eight months later someone begins killing members of the team.  Does someone want the money, or is the cartel out for vengeance?

As an actor, Arnold Schwarzenegger has always traded in simple pleasures; the joy of an exciting action scene and a witty (or a corny) one-liner to cap it off.  In these terms, Sabotage is both classic Arnie and something of a departure.  Schwarzenegger is in serious mode here, his moments of levity coming either through camaraderie with his team or, later, calculation in how he approaches Caroline (Olivia Williams), the cop investigating the murders of his team.  There are no jokes here, no 'Let off some steam Bennett' moments, most of the time he's frowning even as he chomps his cigars.  It's not a massive stretch, but you have to give Schwarzenegger credit for, this time, playing straight, rather than either calling attention to his advancing years or attempting to mould the film to his persona.  If he's never going to be a great actor, Schwarzenegger always was, and remains, a towering screen presence.  Sabotage uses this presence as shorthand to establish the respect he commands from his team and to give the dissolution of that respect some weight.  Of course, character is never in first place when it comes to an Arnie film, and fans will be glad to hear that, while he lets the guns do more of the talking than his fists in this case, he appears to be in rude health.  Throughout, Schwarzenegger more than holds his own with his younger co-stars, and he's got plenty of heavy lifting to do in the film's action heavy last twenty minutes.

Having overdosed on shakycam in his last film, End of Watch, Ayer employs it just enough here; throwing you into the organised chaos of the raids conducted by Breacher and his team.  The major set pieces are spread throughout the film, ensuring that there is never too long a lull and each one raises the intensity of the action and feels different from the others.  Ayer's only real stumble comes at the end of the film, which eschews an obvious and strong (if slightly ambiguous) ending for one more redundant action beat.  It's as well executed as any of the film's other action scenes, but it feels like it belongs to another, sillier, Arnie movie.  I wouldn't be against seeing that movie, but I didn't want to see it in the last ten minutes of Sabotage.

Around Schwarzenegger, Ayer has assembled a surprising cast, both for who is in it and how they acquit themselves.  Sam Worthington, for example, barely recognisable with his shaved head and goatee, is the best he's ever been.  The American accent wobbles on occasion, but otherwise, Worthington finally makes a case for himself as a solid action film lead.  The team aren't especially well defined as individuals beyond the central quartet of Breacher, Monster (Worthington) his wife Lizzy (Enos) and Sugar (Howard), but Ayer and the actors do generate a credible connection, loyalty, and camaraderie between the whole team, which pays off in both the action and the dramatic scenes. 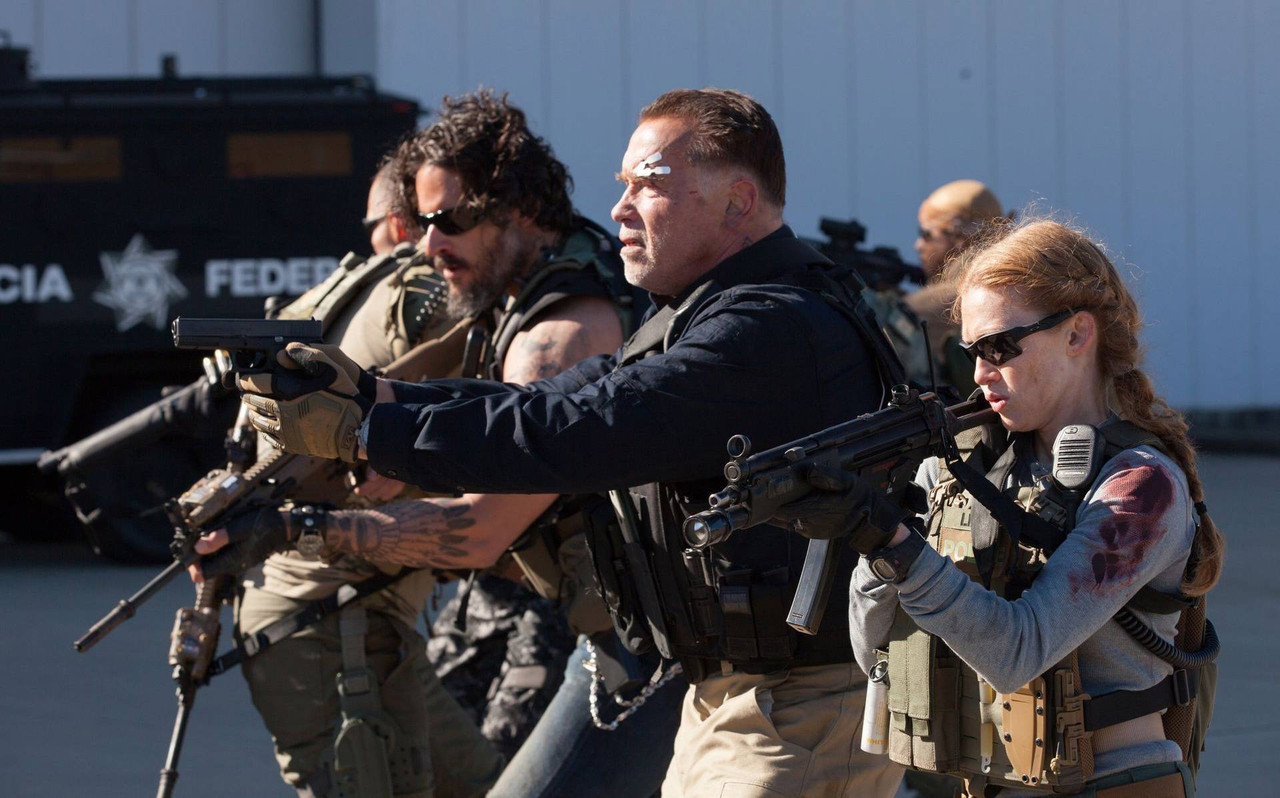 The other great surprise of the film, given Ayer's previous work, is how prominent and how strong the two major female characters are.  As Caroline, Olivia Williams has fun playing a tough character, standing up to Schwarzenegger and joking with her partner (Harold Perrineau) and she too holds her own in the film's big act three action scene.  Better still is Mireille Enos; initially tough and sexy as Lizzy (who is very much one of the guys), but going further and further off the deep end as the film goes on.  Enos plays the role big, but it works both because of the way the character develops and because you believe that she has to be that way to be taken seriously as the girl among this group of alpha males.  I'd love to think that this part would bring Enos some bigger and more prominent roles, but the box office suggests that may not be the case.

Sabotage won't go down as one of the great action films, but it's significantly better than I had expected and better still than the box office results would suggest.  For Arnie fans it's a treat; a harder edged film than he's made so far in this late period of his career and one that continues to show that he's the most interesting of the 80's action stars on the comeback trail.  It's also a high point of recent US action cinema, which has been in the doldrums of late, I'd recommend it to any genre fan.
★★★½
Posted by Sam Inglis at 10:32