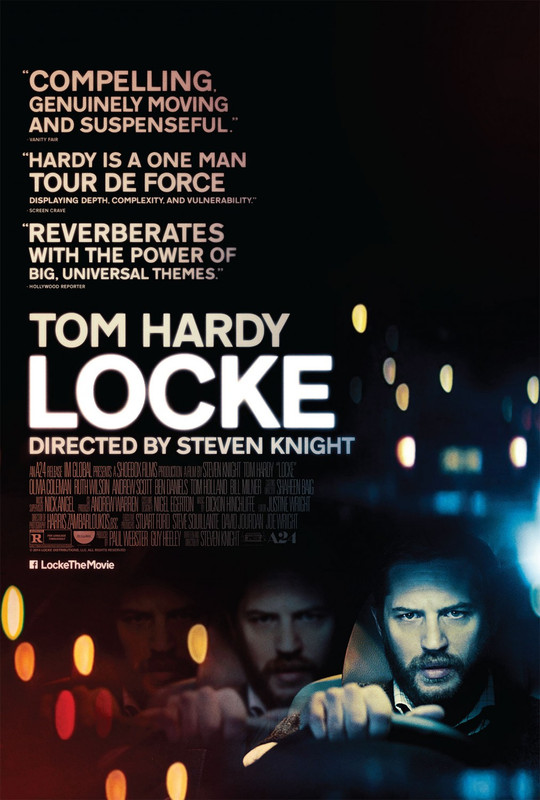 Ivan Locke (Tom Hardy) gets in his car and proceeds to drive along the motorway.  During the journey, he calls various people.  Among others he calls his boss (Ben Daniels) to explain that he won't be in work the next day, his wife (Ruth Wilson) to confess to why he's making this journey and a woman he's had an affair with (Olivia Colman) to talk her through a difficult labour.  Throughout, the camera never leaves the car.

Locke isn't a bad idea for drama.  It certainly has a lot of threads, all of which conspire to pull the main character in a lot of different directions as, over 85 minutes shown in real time, his life almost totally unravels.  However, Locke IS a bad idea for a film.  This is, through and through, radio.  Not one thing that happens is more than incidentally informed by the film's visuals.  In fact only one thing, the few glimpses of Ivan drinking cough syrup, is established solely by the pictures, and that has almost no bearing on the rest of the film.  Every other piece of storytelling, every other piece of drama comes through the dialogue and the way it is spoken.  Only Tom Hardy ever appears on screen, and seeing him added not one palpable thing to the storytelling.

Even for what it is, the film isn't very visually diverting.  It's possible to make single setting films visually interesting, look at the variation that Sidney Lumet finds in the jury room in 12 Angry Men for one of the greatest examples.  Steven Knight finds little variation, his one visual idea is to show an empty back seat and cut in close on Hardy's eyes in the rearview mirror when Ivan is 'talking to' his late father, but this is the most obvious choice he could make, and confers no meaning that can't be inferred from the dialogue.  This is radio.

As well as being radio, Locke isn't even especially good radio.  Hardy isn't bad, but he's pointlessly hamstrung by the fact that he's either elected to or been asked to do a Welsh accent, which is something he clearly can't do.  Within almost every sentence Hardy takes us on several trips back and forth along the Severn Bridge - he's Welsh... he's English... he's Welsh again... English again - it's the closest the film ever comes to threatening us with whiplash.  It wouldn't be so bad if there were some reason that Ivan be Welsh, but there's not.  Nothing would change were he English, or Finnish, for that matter.  The rest of the performances, especially Ruth Wilson's as Ivan's wife Katrina, are all fine, but the problem is not with the acting as much as with the drama itself.

Half of this film is about concrete.  Ivan is a builder, and the job that he's having to miss the next day is a massive concrete pour that could cost his bosses millions if it goes wrong.  Interspersed with his familial issues we get to listen in as he tries to talk his replacement through the steps to make sure the pour goes well, and particularly about how the concrete should be mixed.  It's pretty hard to care unless you have as much interest in concrete as Ivan does, and I'm sorry, but I really don't.  I also don't much care about Ivan's problems.  They're serious, yes, but it's hard to find an ounce of sympathy for him as the situation reveals itself, and I couldn't help but feel that it would be more interesting to be stuck in a room with almost any of the characters he is speaking to, especially his wife, rather than Ivan.

One of the great rules of cinema, laid down because it is, of all of them, the artform that makes following this rule most possible, is 'show, don't tell'.  Locke is all tell.  It shows us nothing, instead it is an 85 minute collection of exposition; a series of sporadic infodumps which we are supposed to see as substituting for character and interaction.  We hear people talking about their feelings, but are cut off from the moments that they are going through them.  True, this is unconventional, but watching Locke suggests that there is a reason for that.

Locke isn't the worst film I've seen this year (it lacks the staggering ineptitude of Devil's Due, for instance), but it is certainly the least cinematic.
★
Posted by Sam Inglis at 15:52