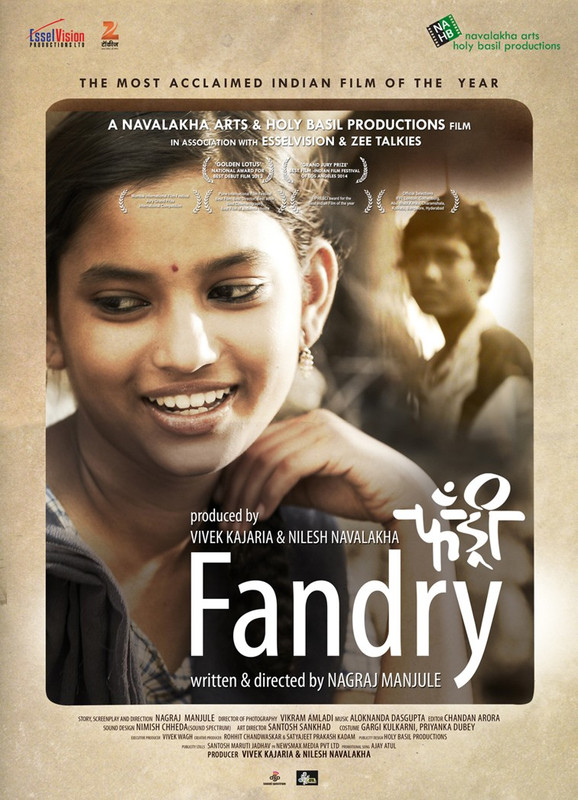 Certain ideas are universal and Fandry deals with one of them.  We've all felt that same pull of our first crush that Jabya is currently going through.  What makes the story specific to India is the fact that Shalu, the object of his affection, is from a high caste while he is of the Dalit (Untouchable) caste, which makes his even looking at her a problem.

Fandry is not the kind of Indian film – mainstream Bollywood product – that we usually see here in the UK.  This is a much more down to earth drama, with naturalistic performances and a notable absence of songs (though there is one, entirely appropriate and unchoreographed, dance sequence).  This made it, for me, much easier to relate to than the rest of the few Indian films I have seen.  This is also true of the way that the film combines the universal and the specific, because it means that the film engages you on two levels; drawing you into a culture that is not your own through an experience that likely is.


All of the performers are credited under the 'introducing' tag (and, unhelpfully, the credits on imdb are incomplete).  It seems safe to assume that most are either non actors or very raw, new, talents.  Hard as it is to judge performances in a language you are unfamilliar with, the acting in Fandry feels unaffected in the best way.  Jabya's crush feels very real, especially in a lovely sequence in which he and a friend move around the school playground to see if Shalu's gaze follows him.  The family dynamics between Jabya, his parents and his sisters also feel very real - even if the cultural differences are a leap, especially when Jabya's family want him to work rather than go to school (he can't be more than 14).  The young girl playing Shalu has less to do, but the camera idealises her in a way that both effectively sets her against the poverty we see Jabya's family in and reflects the way any 14 year old sees his crush.


The only point at which the film falls a little flat is during an overextended closing scene.  Jabya and his family have to catch a pig, and slowly the whole town seems to turn out to laugh at and mock them.  The realities of the caste system work in the background of the whole film, but here it's writ large and though the scene is effectively dramatic it feels a little on the nose, especially with the final shot.  Overall though, Fandry is an engaging film that is affecting on several levels.  I'd like to see more of this sort of Indian cinema.
★★★★☆
Posted by Sam Inglis at 23:13