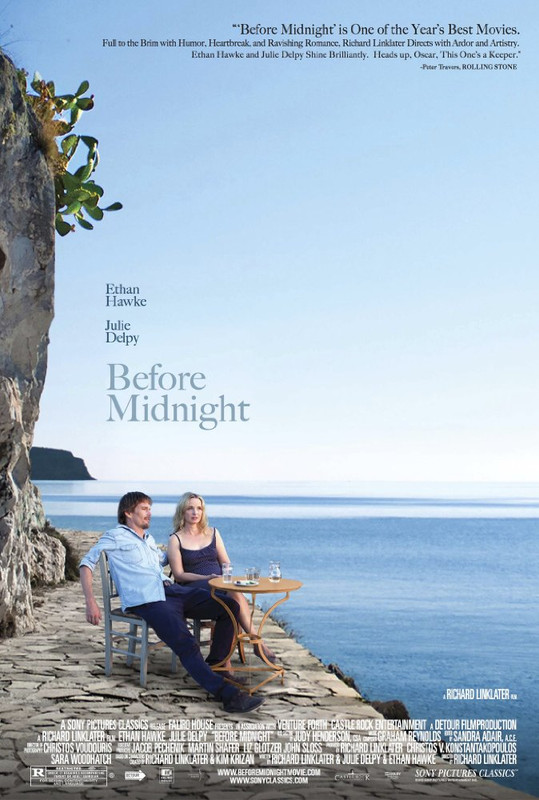 It’s hard to explain what the Before films (1995′s Before Sunrise and 2004′s Before Sunset precede this entry) mean to me. I saw the first film when I was 16, and I fell in love with it, with the performances, the writing, with Julie Delpy’s Celine. When the first word came out about a sequel I was dead set against it; how could it compare, and how could it deliver after the first film left things on such a beautifully ambiguous note? Before Sunset turned out not just to be the equal of its predecessor, it bettered the first film, and again managed to find an indelible ending, but this time I couldn’t wait to see Jesse and Celine again, and I wasn’t surprised when word leaked that Before Midnight was in progress.

The film picks up with Jesse (Ethan Hawke) and Celine (Julie Delpy) 9 years after Jesse missed the plane back from Paris and 18 years after that long night in Vienna. They’ve been together since the credits rolled on Sunset, and now have adorable 7 year old twin girls. As the film opens Jesse has just put his 14 year old son Henry on a plane back to his mother in Chicago from Greece, where he and Celine are on holiday while he is on a writer’s retreat, trying to work on his new book. The couple are now 41 and their relationship is tested over a single night as they talk about, among other things, their children, Jesse’s guilt at being an absent father to Henry and a job that Celine has been offered.

The first notable thing about Before Midnight, among many, is what a joy it is to see these people again. I say people rather than characters advisedly, because I can’t imagine that I’m alone in saying that Jesse and Celine feel like real people to me. However outlandish the details of their meeting and their reunion feel, they themselves (or rather Hawke and Delpy’s astonishing performances) are completely credible. If the films earlier films took somewhat fairytale situations (the idea that you might randomly meet a woman as smart and interesting as Celine on a train, that she’d look like Julie Delpy, and that she’d spend an evening walking round a city she doesn’t know with you an hour after you met seems, at best, fanciful) and put real characters and real conversations in the middle of them, then Midnight’s smartest move is to dump the fairytale. This is a film about love after ‘Happily Ever After’, and about the myth of that phrase. It’s about struggle, but also about how that struggle can be as romantic as the fairytale ever was.

That said, a lot of Before Midnight is hard to watch. We’ve become so invested in these people that to see them argue – not banter, not bicker, not disagree, but really argue to the point that you think there may be no going back – is heart in mouth stuff; as tense as any thriller. This is what is so meaningful about the history behind this film, it means that everything matters, from the biggest line to the smallest gesture.

Each of the films in the series is subtly structurally different. Sunrise is a series of snatched moments, Sunset is one long meandering conversation and Midnight falls between these stalls, unfolding almost as a series of one act plays. Most of those acts are brilliant, but one is problematic. About twenty minutes into the film, Jesse and Celine arrive for their last meal at the writer’s retreat before going home, and here, really for the first time, we see them separate from each other, and also in a larger context (a dinner with friends). It’s not that these scenes are bad in and of themselves, indeed there is an appealing Rohmeresque quality to the dinner scene in particular, and I can see that Linklater and his co-writing stars are trying to place Jesse and Celine in context alongside a young couple about the age they were in Sunrise (Yiannis Papadopolous and Ariane Labed) and an older couple who seem to have been married a long time (Panos Koronis and Greek filmmaker Athina Rachel Tsanagrai). The problem is that this is a long section of the film, and it largely turns the focus away from Jesse and Celine, which feels wrong for the series. This would be a lesser issue if the ideas expressed at the dinner came back, but by this time everything that will come into play to come between Jesse and Celine has been set up already, and the dinner feels rather redundant.

Aside from this section though, Before Midnight is stunningly, spectacularly, brilliant. In fact, that scene notwithstanding, it may well be the best of the series. It begins with a great and wrenching scene of Jesse saying goodbye to his son, and you can see how much that absence is felt in Hawke’s face throughout the film, especially when, on two occasions, Celine takes a call from Henry and fails to pass the phone to Jesse. The car journey from the airport to the retreat is another small masterpiece, bringing us gracefully up to date with where Jesse and Celine’s lives have gone in the past nine years, recalling the car journey from Sunset, but also sowing the seeds of the arguments to come and showing us that this is not the ending we may have imagined for these people. 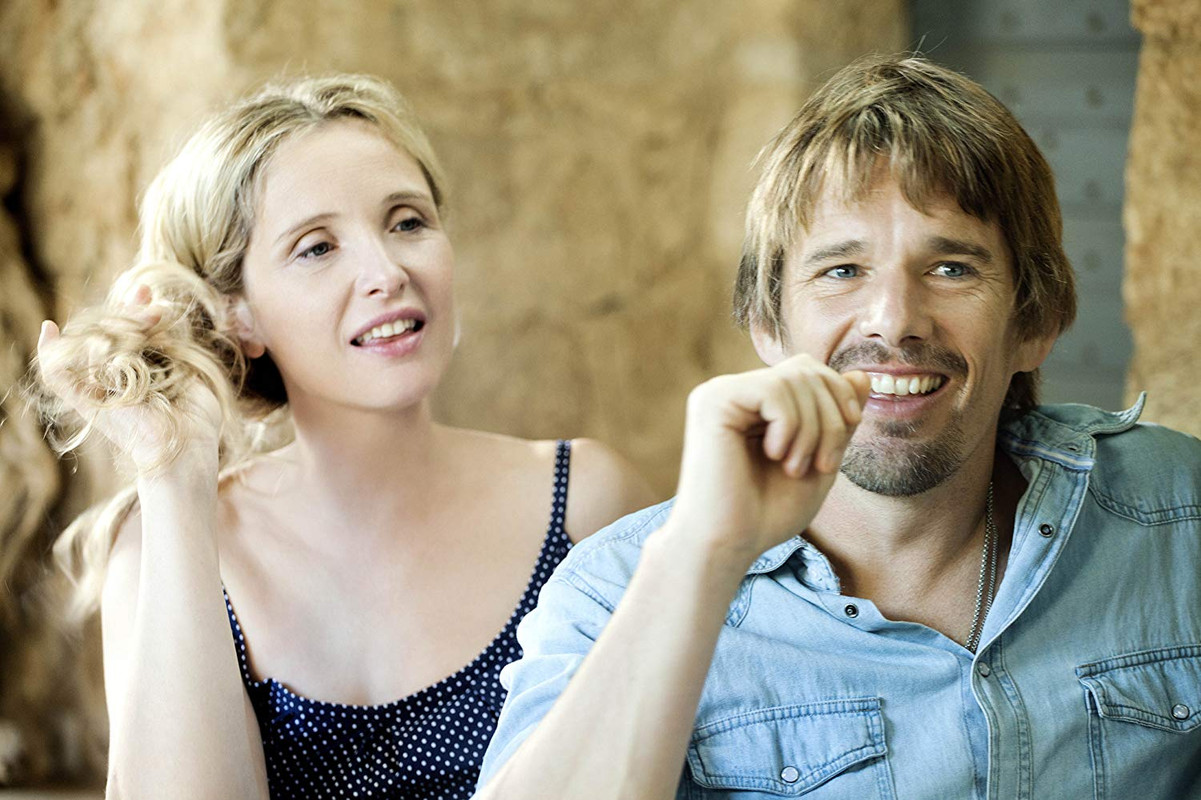 The film really hits its stride, however, in its second half, when everyone else; the friends, the kids, is out of the way and once again we’re alone with Jesse and Celine. Linklater, Hawke and Delpy bait the hook perfectly, recapturing the past with the two walking and talking their way from the retreat to a hotel. Once again we see the chemistry and the connection, and we sense how it has only deepened in the time since we’ve last seen these people, but then comes the final act, and Before Midnight threatens to rip our hearts from our chests.

To go into specifics would be unfair, but the last forty minutes of Before Midnight are the best forty minutes of cinema I’ve seen for a long time. The scenes are confined almost entirely to the hotel room Jesse and Celine are sharing, and the mood goes from sexual to a potentially final argument in short and utterly believable order. The intimacy that is felt in this scene is incredible, first in physical terms – Delpy spends about five minutes topless, even as the argument kicks off – but more so in terms of the level of insight into what is happening between these two people. I suspect everyone has been here, and it’s a horrible place to find yourself, and it’s nearly as difficult to sit through this scene. I was completely taken in, never thinking about the fact I was watching a film or people acting. I was on the verge for most of the last third of the film, and couldn’t hold in the tears come the final, perfect, scene. I’m not sure I believe there is such a thing as a perfect film, but there are perfect cinematic moments and each of the Before films has several. The last scene here is one. It’s incredibly moving, funny, but never forgets the gravity of what has gone before, and, once again, leaves things on an ellipsis,

The Before series works for two reasons: Ethan Hawke and Julie Delpy. As they did in Sunset (and an uncredited capacity for Sunrise) the stars pull double duty as writers, and it’s clear that this dialogue is deeply felt, however, for me it is as actors that they truly make the films soar. There isn’t a single moment in Before Midnight – whether it’s Jesse at his most pretentious when discussing his books or Celine at her silliest pulling a rat orgasm face – in which it feels like either of the stars is acting. That said, if you have to pick one, the perennially underrated Hawke is the MVP. There is so much going on for Jesse, so much raw emotion, so many things pulling him in different directions and Hawke, without overselling it, wears every one of them. There is such a rawness to his emotions and his performance, especially as he responds to Delpy in the last third, you can feel every cutting remark and every worry he has.

I’m so torn on the grade for this film. I know that most of it deserves five stars and the highest recommendation I can give, and yet those twenty minutes, that dinner scene, is problematic. If it were a brief stumble I’d be more forgiving with the grade, but no matter the grade Before Midnight is essential viewing. One caveat: you need to come to it knowing the other films, both for the context and because knowing them informs the sheer depth of character and a great deal of the film’s feeling comes from the history that we in the audience share with these people. This is adult, engaging, storytelling and I can’t wait for the next chapter.
★★★★☆
Posted by Sam Inglis at 16:38