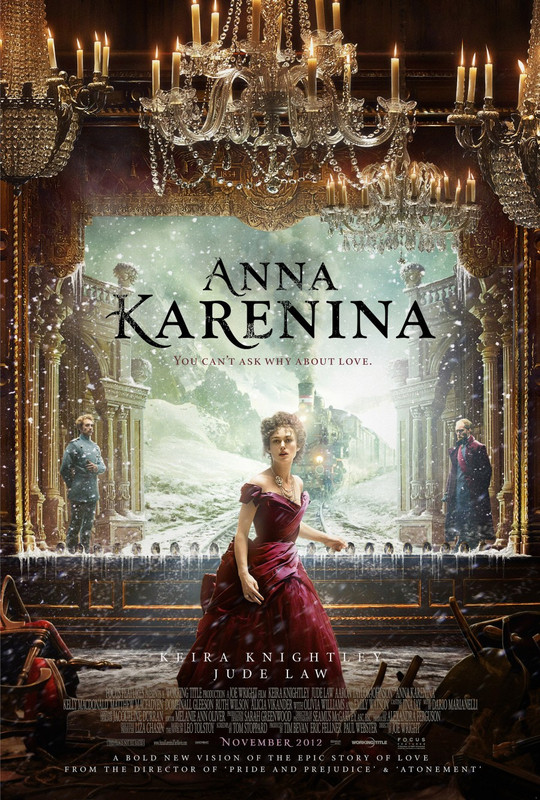 Before I even begin I should admit upfront that I've not read Tolstoy's Anna Karenina, nor seen any of the other film and TV versions that have been made over the years, so I am coming to Joe Wright's telling of this story about as fresh as is possible. I'm not sure that's the ideal way to watch this radically stylised telling of what is, at its heart, a simple story, but I was surprised by how much I - for the most part - enjoyed it.

Director Joe Wright has a bit of a mixed record with me, I enjoyed his lightweight Pride and Prejudice, loved the first third of Atonement, but struggled with the rest, and found Hanna to be a very mixed bag, with some outstanding things in it.  Anna Karenina is his most ambitious work, and, despite the luminous beauty of Keira Knightley in the lead, it is Wright who is really the star of this film.

The technical quality of Wright's filmmaking has been undisputed since Atonement's ambitious D Day set piece shot, but he has truly excelled himself here.  For a while this was planned as a straightforward adaptation of the novel, with Wright scouting locations in Russia, but just a couple of months before cameras rolled the visual concept was completely changed, and it was decided that the whole film would be set inside a theatre - all the world's a stage indeed.  Obviously this has huge impact on the design and the choreography of the film.  Wright has always seemed a classical filmmaker to me, and his Karenina is right out of the 1940's.  The film I kept seeing the influence of was Powell and Pressburger's The Red Shoes, in terms of the design, the movement (characters frequently move in a way that could be called balletic, and do mid scene, on screen, costume changes) and in terms of the way Wright directs his actors.  This isn't to say that Anna Karenina isn't its own film, for all the influences it feels like Wright is doing something that is original, and frequently very impressive.

It's a dazzling looking film, and an intelligently and evocatively designed one, whether it's the moment that Levin (Domhnall Gleeson) leaves a stately home to find his brother in a slum; a journey that takes him up above the stage, among the ropes and cables, or the moment he decides to return to his farm, and a backdrop is removed from the stage to reveal a snowy meadow, I was often left amazed at how well the stylistic choices work.  It takes a while to adjust, but after twenty minutes I found myself simply accepting the setting; it seems perfectly natural that after hearing that his wife is pregnant with another man's child Alexei Karenin (Jude Law), goes and sits in a chair in a spotlight at the front of a stage, because Wright has fully established a world here; one that is heightened, of course, but still one that feels credible, if not 'real'.

That same period of adjustment is also needed for the performances, which, to varying degrees, tend towards the theatrical.  Matthew MacFadyen, for example, is an overblown riot as Anna's brother Oblonsky, and clearly the beneficiary of most of screenwriter Tom Stoppard's comic instincts, it's always great to see Oblonsky in the film, because MacFadyen's performance leavens the seriousness and potential po-faced nature of the rest of the film.

On the other end of the scale is Jude Law, whose reserved performance as a seemingly closed off Karenin, keeping his emotional cards close to the chest and not confronting his wife even when her behaviour, frankly, would warrant it, is perhaps his best ever.  What's really great about Law's performance is that he lets us see everything that is going on beneath Karenin's controlled exterior; the anger, the hurt, all of it is written on his face, but it's never overplayed.  The supporting cast is excellent, the aforementioned Domhnall Gleeson must by now be counted among the best young actors around, and he and Alicia Vikander; the young Swedish actress recently seen in A Royal Affair, make the secondary love story between Levin and Anna's cousin Kitty rather affecting (there is a lovely scene in which they communicate with blocks with letters printed on them).  Also impressing in smaller parts are Kelly MacDonald, Olivia Williams, Holliday Grainger and Emily Watson, among many others. 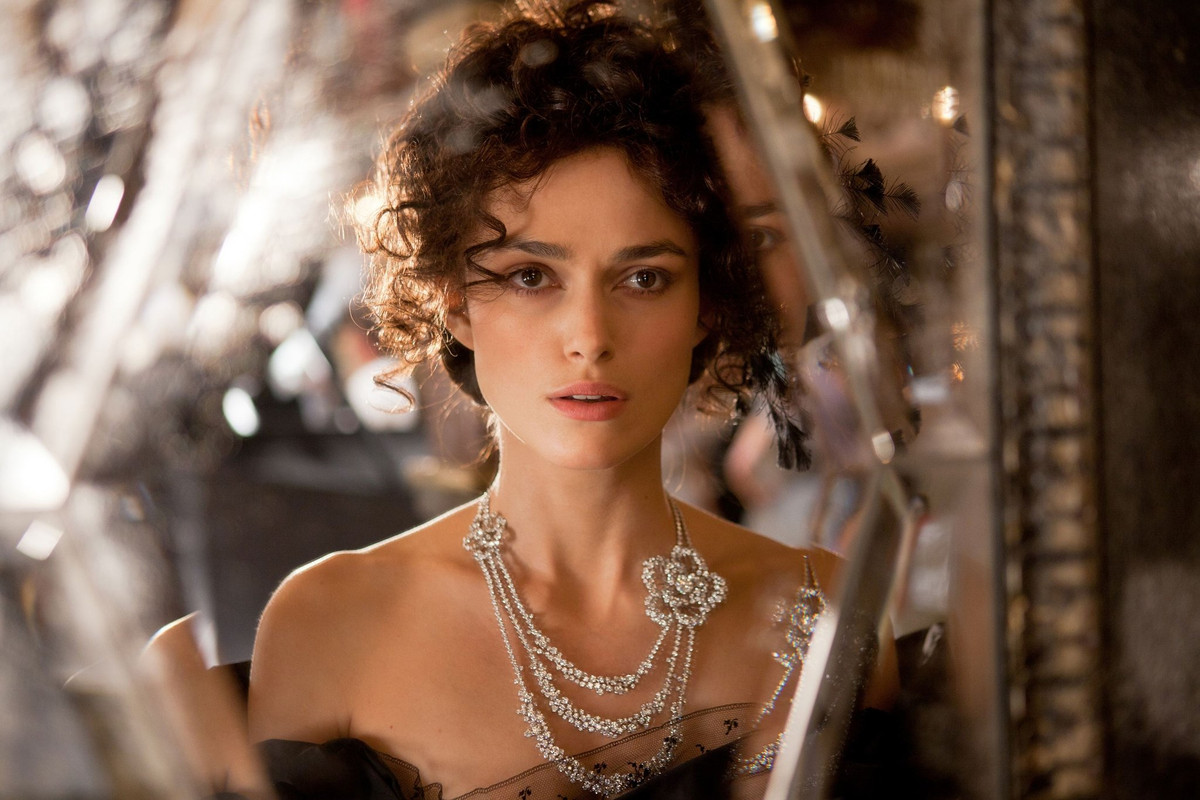 I always feel I have to make excuses for being a fan of Keira Knightley's.  Well, forget it, I'm done making excuses.  As I said, I've not read the book, but for the story being told here Knightley seems well cast.  Like Jude Law, she suggests a lot beneath the surface.  In early scenes, when she goes to a ball where Kitty is, essentially, being unveiled as a prospect for marriage proposals, we get a real sense of history; of how this was Anna ten years ago, and this plays into the relationship with Law and to her attraction to Aaron Taylor-Johnson's Vronsky.  Good as Knightley is, and she's great, emotionally matching her character's physical transformation from hemmed in society lady to wild haired romantic running off with her lover, her performance is somewhat undermined by Taylor-Johnson's.  The Kick Ass star makes for a rather pallid and charisma deficient Count, and seems to have missed the tone of the film, underplaying to the point that he doesn't allow us to believe in the operatic scale of Anna and Vronsky's need for each other, we buy it from Knightley's side, but there is a lack of that grand passion in Taylor-Johnson's performance which can't quite be repaired by either the sumptuous imagery or the good work going on around it.

That the film as a whole manages to overcome this flaw really does attest to its many other strengths.  Seamus McGarvey's cinematography is stunning, and is likely to be in contention for an Oscar (assuming the Academy has any taste), but the style is far from the only reason to get out and see this Anna Karenina.  It may not be perfect, but quality performances abound and, for the most part, it has the substance to match its style.  This is easily Joe Wright's most complete and best film to date, and I'm excited to see where he goes from here.
★★★☆☆
Posted by Sam Inglis at 16:54