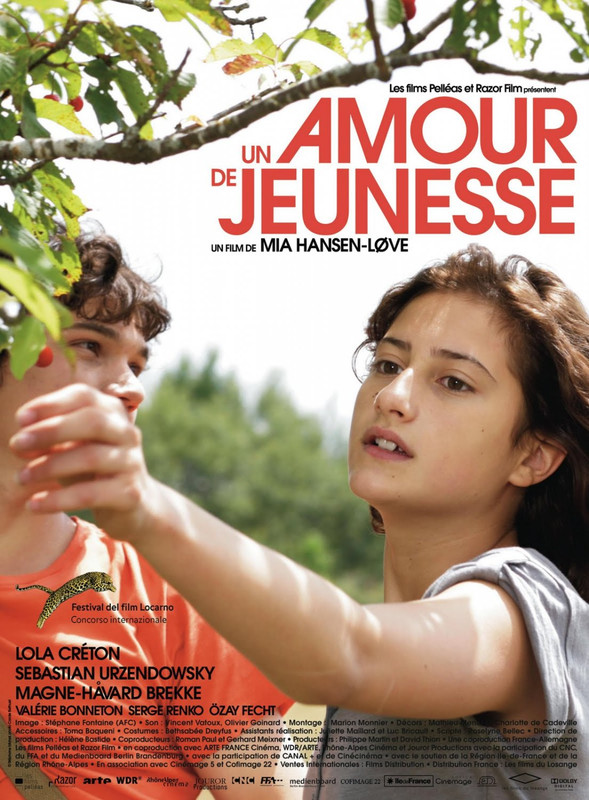 If there was ever a film I should like it's probably this one. A couple of years ago I saw and loved Catherine Breillat's Bluebeard, and predicted big things for its young star Lola Creton, who is the lead here, but it's more than that. I'm notably fond of coming of age movies, and recently there have been a lot of great entries in the genre coming out of France (Love Like Poison and Water Lilies to name just two), and this personal feeling story from Hansen-Løve has been feted as one of the best recent examples, but eventually, and despite its several undoubted qualities, it left me underwhelmed.

Goodbye First Love takes the long view of the coming of age movie, seeing it not as a snap of the fingers but as a ten year process in the life of Camille (Creton), we meet her as a 15 year old, head over heels for her first boyfriend Sullivan (Sebastian Urzendowsky), Sullivan is about to leave for a 10 month trip to South America, without Camille, who is crushed. The film follows her through other relationships until, almost 10 years later, she meets Sullivan again.

In that summary I have given away much less than the film's trailer, which is essentially a two and a half minute digest of the film. This is a huge problem, the trailer hits almost every important emotional point of the film, almost completely in order, and so when you see the actual film it feels almost like a clunkily expanded version of an elliptical (and rather good) short. It's a real problem when your trailer is better than your film. That ends up being the case because Goodbye First Love is incredibly repetitive. Over and over and indeed over again we get basically the same set of scenes of Camille telling Sullivan she loves him so much she'll die without him, Sullivan saying she has to stop talking like that or he'll dump her, them arguing, and them reconciling. The early part of the film, before Sullivan leaves for South America, takes up perhaps 50 of the film's 110 minutes, but it feels much longer.

This is also because, well observed though they are, neither Sullivan nor Camille has much personality. One of the reasons I love Fucking Amal so much is that even when they aren't easy to be around, Agnes and Elin are really interesting people, that's never true of this pair, and Urzendowsky's flat acting doesn't help. What comes close to rescuing the film is Lola Creton's performance. Just seventeen when the film was made, Creton is spectacularly good throughout (which makes the already dull Urzendowsky a total non-entity). In the early scenes she seems tiny and delicate, and very very young. For the later scenes, in which she ages up to about 24, there are no real efforts made to age her artificially, but Creton visibly grows up. It's all in the way she holds herself; taller and broader shouldered, and less inclined to passivity. It's very subtle, but the effect is felt throughout the film's second half.

That second half would be more interesting if key beats hadn't been given away by the trailer, the relationship that Camille forms with her architecture professor is very different to the one she had with Sullivan, and Magne-Håvard Brekke does nice work with a character who is a shade underwritten, but come the third act, Camille's actions don't feel all that convincing (though Creton is as good as ever) because if I'm honest I don't really buy into the connection she and Sullivan have.

Mia Hansen-Løve has plenty going for her as a filmmaker; she's got a nicely unobtrusive eye, and the cinematography is beautiful, and while one of the performances here falls flat she otherwise gets great work from her actors, finding little moments of truth in her sprawling narrative. On the other hand, Goodbye First Love is overlong and often feels repetitive, and the central couple just aren't that interesting. Creton's fantastic performance is worth seeing, but it's the only thing I can whole-heartedly recommend here. Hansen-Løve has said that this is a heavily autobiographical film, and perhaps she should consider moving away from that aspect next time, but still, the biggest problem is one that could quite easily have been fixed: Goodbye First Love's trailer totally undermines the experience of the film. I'm not saying it would have been great if that weren't the case, but certainly had more of the emotional beats come as a surprise I suspect I'd have liked this film rather more.
★★☆☆☆
Posted by Sam Inglis at 19:26