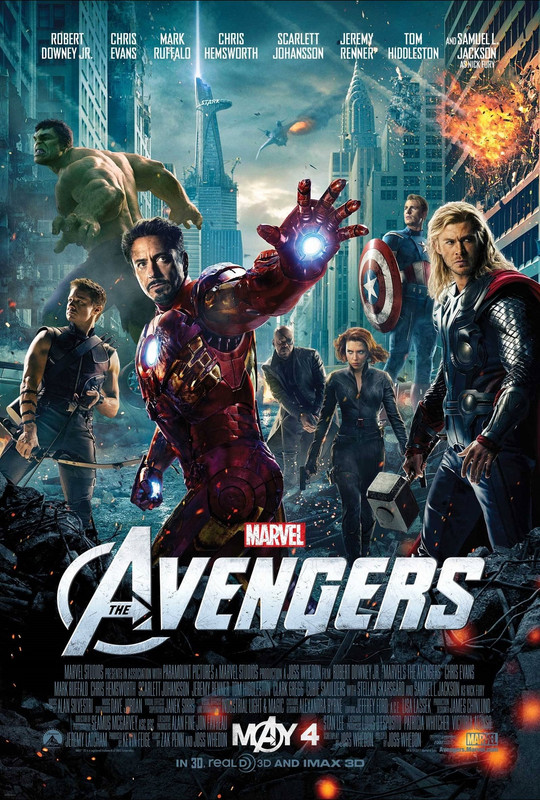 So, here it is, this is what Marvel have been building to for about four years now; its signature characters brought together in a first for the big screen. There have been previous attempts to bring a team of otherwise disparate superheroes to the cinema, but DC's Batman/Superman and Justice League projects both fell through thanks to both script and budget issues.

One thing that Marvel has largely done right with its superhero films is to turn not to journeyman shooters but to more esoteric choices to helm their franchise characters, and the smart, slightly offbeat, choices continue with the drafting of Joss Whedon to write and direct this $200million plus gamble. Whedon may have a legion of drooling fanboys, but some of his projects have not exactly been hits; Serenity was seen by the 400 people who watched Firefly, but few others, and Dollhouse never caught on with audiences either, while his previous attempt at getting a superhero film together also stalled, with Wonder Woman now seemingly stuck in the bowels of development hell. Whedon's writing also has a very particular tone, the question is whether he can marry that to a huge blockbuster, as well as juggling eight main characters and a large supporting cast. I wasn't expecting a lot, largely because I've often found that even with well established main characters, superhero films overloaded with characters don't work (see Spider-Man 3), but, happily, Whedon has delivered on just about every level and Avengers Assemble, despite some rough patches, is one of the most satisfying blockbusters of recent years.

The difficulties of bringing the project off show in the first act, which is episodic and bitty and, despite some great scenes and plenty of action, feels pretty lengthy. All the characters need to be re-introduced, the villain (Tom Hiddleston's Loki, first seen in last year's Thor) and his evil plot have to be established and in between the explodey bits we need the getting the band together montage. It takes a while, and you feel that this is where Whedon is trying (and often failing) to find his voice and mould it to this property. This isn't to say that there's not good stuff in the first half hour; Black Widow (Scarlett Johansson) has a great fight and there is a very funny scene between Tony Stark (Robert Downey, Jr) and Pepper Potts (Gwyneth Paltrow), but the feeling here is of a film taking a long while to rev its engines.

By about the 35 minute mark the film has revved its engines, then Whedon releases the handbrake. A set piece in Berlin establishes Loki as a bona fide threat, but also begins the process of slowly, tenuously, uniting the Avengers while emphasising their very different personalities. For much of its second act the film is confined to a SHIELD airship, where the team feel each other out as they try to find out where the McGuffin (a glowing blue cube called the Tesseract) is and to discover the exact details of the captured Loki's plans. This is where Whedon's skills as a writer really come to the fore. What could have been a series of scenes of people in (often very) silly outfits standing around explaining an impenetrable plot to one another becomes a series of smartly written character scenes which also happen to deliver scads of exposition. It's no surprise that Robert Downey, Jr begins to take centre stage here, because the way his Tony Stark has always been written is a perfect fit for Whedon's smart, snarky, voice. Certainly Downey has a lot of fun with Whedon's lines (To Thor: 'Does thy Mother know that you weareth her drapes?'), but Chris Hemsworth's Thor get perhaps the film's best line, and delivers it in a perfect deadpan.

That's not to say that Whedon neglects drama. I've not previously been that on board with the voices saying that Tom Hiddleston is one of Britain's best young actors, largely because I despised Archipelago in a way so profound that thinking about it makes me cross. His role in Thor didn't do a great deal to win me over, but he's flat out fantastic here. One problem with the film is that the army that Loki commands, and the reason he has recruited them, never feels all that credible, but Hiddleston's performance, which bristles with megalomania but never crosses into camp, is so good that he alone makes Loki a credible threat. His scene with Scarlett Johannson in the middle of the film is some of the best acting I've seen in a superhero movie. 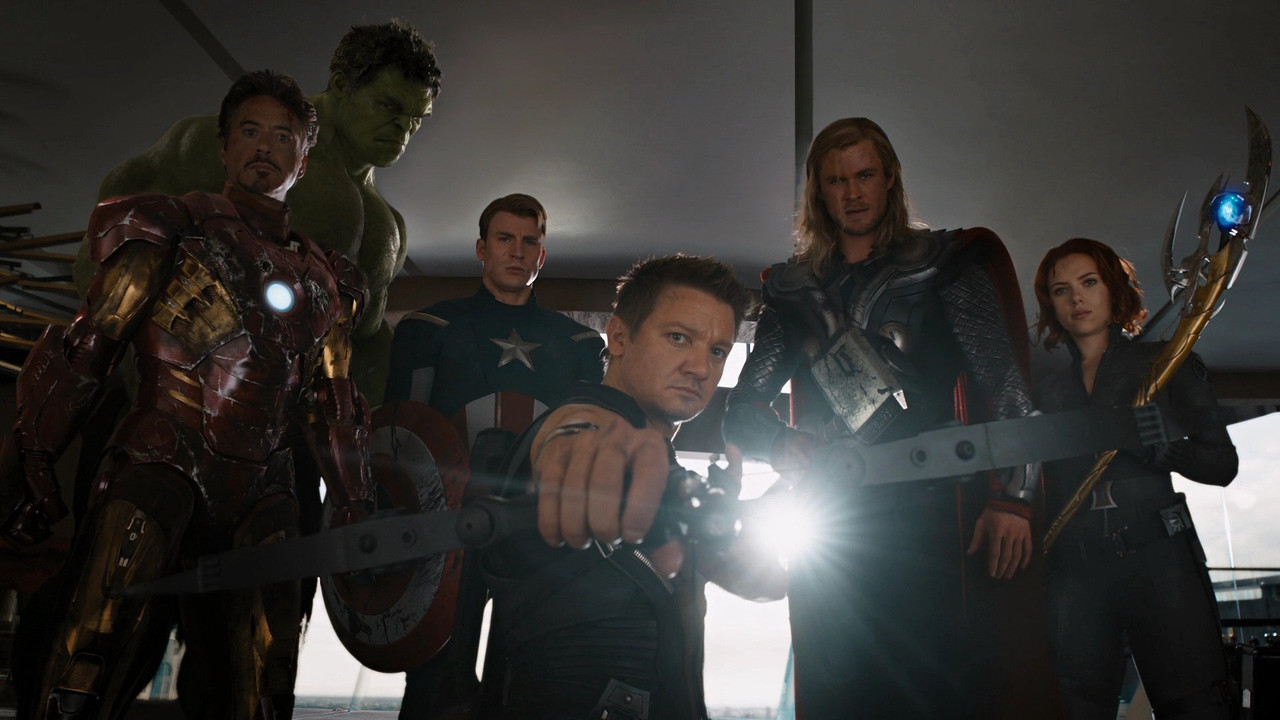 The rest of the cast generally do fine work too. Downey is completely comfortable in Tony Stark's skin at this point, and he makes for a solid anchor. Chris Hemsworth raises his game from Thor, and plays especially well off Downey. Chris Evans evolves his square jawed hero a bit as Captain America, and grows organically into the leadership role, his performance promises interesting things for the modern-set Captain America 2. On the slight downside, Johannson is as weak as ever as Black Widow. For some reason I just can't see past Scarlett Johannson the actress to her characters. Also disappointing is Jeremy Renner whose Hawkeye, introduced via a short scene in Thor, develops little personality. Counter to those disappointments is a strong supporting cast; the aforementioned Paltrow, as enjoyable as ever as Pepper Potts, Samuel L. Jackson, oozing effortless cool as Nick Fury, Stellan Skarsgaard making the best of a plot convenience role, Cobie Smulders giving some personality, and hotness, to an expository part and Clark Gregg, whose part as Agent Colson is beefed up and lends the film both laughs and surprising emotional weight.

The big surprise, however, is Hulk. Twice Marvel has tried, and frankly failed, to make Hulk a viable big screen presence. Neither Ang Lee's po-faced pyschodrama with occasional plasticine looking CGI nor Louis Leterrier's action heavy reboot really worked, but Whedon finds the sweet spot, and discovers that it is in making Hulk a useful cameo player rather than the centre of a narrative. As Bruce Banner, Mark Ruffalo finds the conflicted note that Edward Norton never really managed, but it's when Hulk appears in the film's gigantic third act set piece that the film hits some of its most kickass, and most unexpectedly hilarious, moments.

The third act is usually where blockbusters collapse for me. However much fun, however good the characters may have been to that point they usually have to surrender all that to half an hour (an hour if you're Michael Bay) of nonsensical, CGI heavy, action. I love action cinema, but I hate the way action is shot these days. Shakycam and fast cutting have robbed action sequences of geography, and therefore of sense and investment, and without those things all that action sequences are is CGI vomit. Happily, that is not what has happened with Avengers Assemble. Rest assured, Whedon and team bring the spectacle; whole blocks of New York City are devastated (the only real complaint I have here is that sometimes the 9/11 parallels feel as if they are laid on a bit thick) and there is much exploding and fighting to keep everyone happy, crucially though, Whedon never loses track of what he has spent the previous hour building. 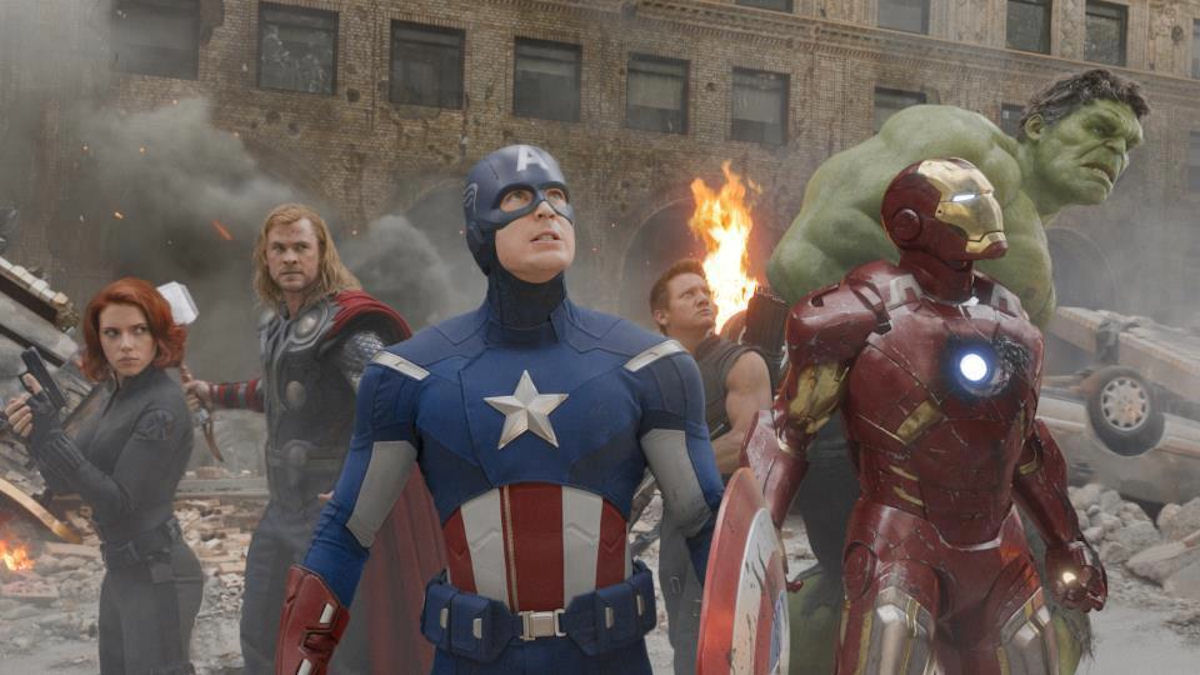 The Avengers do not become a single generic 'hero' character in the last half hour of the film, rather they continue to behave as individuals, and Whedon designs the action so that he can play to each of their strengths and give everyone a moment in the sun. He also brings a degree of emotional weight to proceedings, and is not afraid to slow down for a character beat in the middle of the battle (Downey's scene with Hiddleston as the fighting really amps up is one of the film's best acted moments). This is combined with an incredibly large scale action sequence which, despite some obviously Transformers influenced character design, fails to echo Michael 'The Great Satan' Bay in one hugely important way: it makes sense.

While the action in Avengers Assemble is not especially groundbreaking, or even notably brilliant, in terms of its choreography, there is much to recommend it, and to show that Whedon has become a very capable action director and (along with Jeffrey Ford and Lisa Lassek) editor. Each character has their own identity, their own signature within the action - the most extreme examples being the contrast between Hawkeye's absolute precision and Hulk's whirling dervish of destruction - so you're always clear about who is doing what. Whedon also manages to connect the series of mini-battles together, and bring them into the same arena without us wondering where people are in relation to one another, or how that character suddenly got over there. It's so simple in concept, but so seldom delivered now, and getting this one thing right adds so much satisfaction to the film's last half hour.

There are a few chinks in Avengers Assemble's armour; a slow start, a couple of characters who don't work as brilliantly as the others, and one really duff performance, but overall, most of that ceases to matter because what we have here is a truly satisfying summer blockbuster with a great villain, a strong screenplay and involving, exciting and entertaining action. By the end, Whedon has earned every one of his hero shots. On the whole, it's been a while since a superhero movie has worked this well.
★★★★☆
Posted by Sam Inglis at 20:38