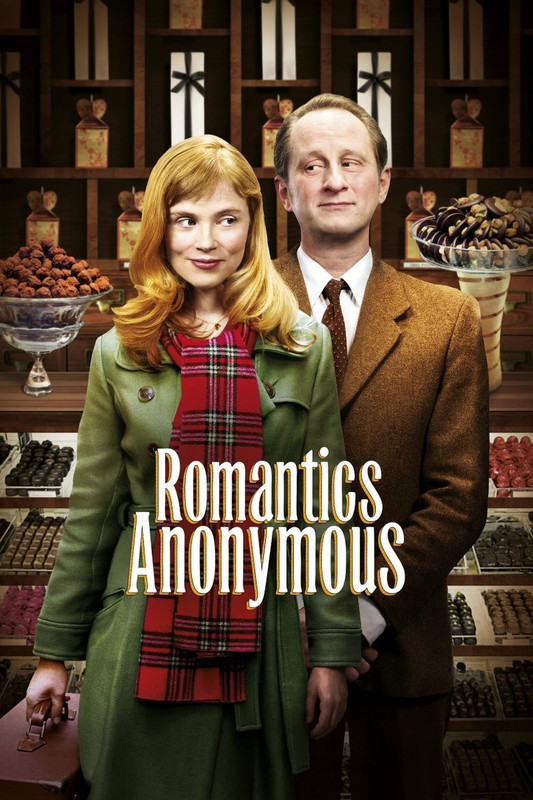 The problem that I've had with most new romantic comedies of late has been threefold. 1: They're not romantic. 2: They're not funny. 3: They're about awful people who don't deserve love anyway (see - or rather don't see - among others, The Bounty Hunter, Bad Teacher and Just Go With It). Well, Romantics Anonymous avoids all three of those potential pitfalls. Isabelle Carré and Benoît Poelvoorde play people who both suffer from extreme anxiety, which in both cases comes out most around the opposite sex. When Carré's Angelique - who is a master chocolatier, but too shy to say so - begins working as a sales girl for the struggling chocolate factory run by Poelvoorde's Jean-Rene the two begin to fall in love. Can their attraction overcome their crippling shyness? You'll know the answer to that question seconds in, but that's hardly the point.

It's fitting that Romantics Anonymous is set among chocolate, because it is itself a confection; a little insubstantial, not especially nourishing and, at 74 minutes, bite sized, but for all that it's easy to enjoy while it lasts, and likely to leave you wanting more. That's perhaps my biggest complaint here, I'd quite like the film to be twenty minutes longer than it is, which would leave it at a still very manageable 94 minutes, but give a little more breathing room to two interesting and charming characters and to two fine actors, who each give excellent performances here.

I can't pretend to have a full overview of Isabelle Carré and Benoît Poelvoorde's careers, but their best known works are very different from this film. Carré has excelled in challenging dramatic roles; as an erotomaniac in Anna M, and as a pregnant drug addict in Francois Ozon's Le Refuge, while Poelvoorde remains best known as the killer followed by a documentary crew in Man Bites Dog. In short, neither is an immediately obvious fit for a light rom-com.

Poelvoorde is terrific value as the incredibly inhibited Jean-Rene, whose panic is so profound that when - as an exercise given to him by his psychiatrist - he takes Angelique to dinner he also takes a briefcase with extra shirt, so he can change when he gets sweaty. This turns the first date into an awkward dance, with Jean-Rene repeatedly leaving the table and Angelique, through her own panic, convinced it's her fault. The comedy of Jean-Rene's character comes from his total inability to express his emotions, that's similar to Angelique, but the two aren't simply variations on the same character. The really sweet, and funny, thing about Isabelle Carré's work comes from the way Angelique is continually trying to reassure herself. The film is so keen to tell us how lovely the character is that it names her Angelique Delange, but Carré is effortlessly appealing anyway; her sparkling green eyes and slightly gap toothed smile immediately winning.

Romantics Anonymous hits most of the clichés of its genre (with the welcome exception of the inexplicable third act breakup, which has lately become almost compulsory), but in doing so it finds many of its best scenes. The moment that Jean-Rene gets up at a restaurant and with the backing of the resident band, sings to Angelique, could have been cringemaking, but it isn't. Poelvoorde and Jean-Pierre Ameris both underplay the moment, and a great deal of the sequence is allowed to play on Carré's reaction. Even the big confession moment works. It could easily be as cloying as that horrid "I'm looking for my wife" bit in Jerry Maguire (surely one of cinema's most vomit-inducingly treacly scenes), but by this point you're completely behind Jean-Rene and Angelique, actively rooting for them to get together, and the scene plays with total sincerity from both actors, which helps both the comedy and the romance of the moment play.

The film is filled with irresistible moments, be it the night Angelique and Jean-Rene have to stay in a one bed hotel room, Jean-Rene's description of their first kiss, or Angelique's repeated singing of "I have confidence in me", in scenes that, taken with the film's bright colour scheme, feel almost Disney like; Angelique giving us her own, more understated, version of the 'I want' song. Romantics Anonymous is an all too rare thing; a genuinely likeable film. As a filmgoer I love to be challenged, but sometimes there's nothing I like better than to float away with a little bit of escapism, and Romantics Anonymous is a perfect way to do that.
★★★★☆
Posted by Sam Inglis at 19:04