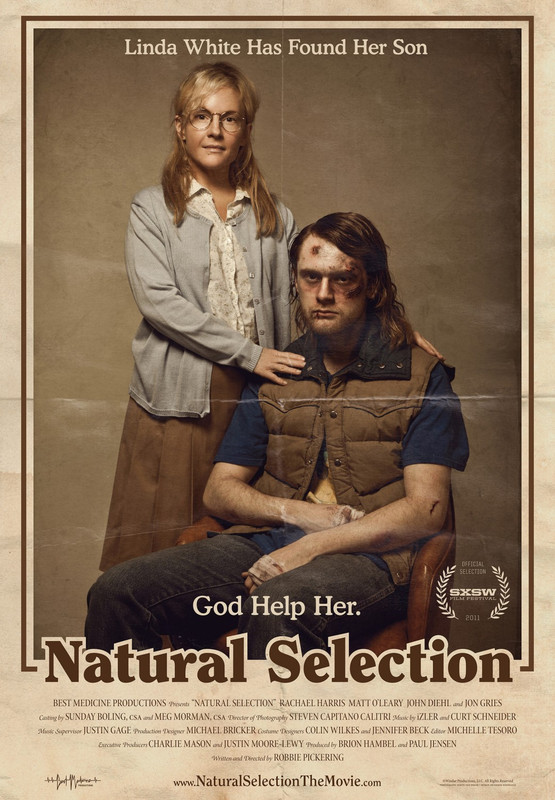 Robbie Pickering's début has many touchstones, and it fits the mould of a relatively typical quirky American indie, but despite the fact that - especially to fans of the Coen Brothers' earlier, more freewheeling films - it may feel familiar, Natural Selection comes at us with such energy and such likeability that it is hard to imagine that anyone will mind very much.

The film focuses on Linda White (Rachael Harris), a 40 year old housewife whose husband Abe (John Diehl) refuses to make love to her for religious reasons, as they can't have children. One day Abe has a stroke, leading Linda to discover that for 25 years he has been donating at the local sperm bank. Thinking that Abe is going to die, and that he has asked that she track down his son, Linda sets out to find the 23 year old progeny of one of Abe's donations, but gets more than she bargained for when she finds Raymond (Matt O'Leary); a foul mouthed, drug addled, recent prison escapee.

Even from that brief synosis you can probably figure out much of what is going to happen during Natural Selection, and you'd be right most of the time, as the film does tick off a quite well established series of events, and foreshadows many of its twists quite clearly. This often annoys me more than it does most people, purely because I've seen so many films over the years (8-9000 is my current guess), but here it's fine, because the drama and the laughs come not so much from the storyline as they do from the characters.

Characterisation is a collaboration, it comes from the writing, the direction and the acting, and the three have to work in concert for it to really work. Here the balance is struck beautifully. At a screenplay level Pickering has created characters who seem on the surface to be a little stereotypical (the sheltered Christian housewife striking out on her own for the first time, the dishevelled redneck fuck up, etc) but slowly the script reveals layers behind that surface and reasons for the way these characters are. One pivotal scene has Raymond and Linda share a stolen supper, and reveal some painful truths about their backgrounds, and that, among several other scenes, really lets us see them as rounded characters. Pickering's direction is also strong, visually Natural Selection may not be the most dynamic or original film, but he exhibits a fine sense of timing in his cutting, a good balance between comedy and drama, and finds a few memorable shots (few more so than when we first see Raymond).

For me though, Natural Selection is an actor's piece, and while there are good supporting contributions from Diehl and Jon Gries, the film really belongs to Harris and O'Leary. O'Leary, an actor since childhood and familiar from the Spy Kids series and Brick, among others, is unrecognisable and very funny as the lank haired, bearded and frequently injured Raymond, he evidently enjoys Pickering's salty dialogue, and plays an early scene in which, after he's been beaten up, Linda gives him a bath, with perfect comic timing. That said, he's also believable in the film's more dramatic beats. Harris is perhaps even better. She too plays some of the comedy quite broadly, but only by embracing Linda as a character, she's never winking at the audience. Some people have observed that Linda; a buttoned down Christian housewife who believes in her duty to her husband so much that she's stayed in a sexless marriage for 25 years, wouldn't so readily fall into some of the things she does with Raymond. For me, Harris' performance makes it play, Linda always remains the fundamentally decent and sweet woman she is at the start of the film, but I believe her process of discovering the different things that that can mean once she's really out in the world for the first time.

The performances really power this film, O'Leary's character in particular might be problematic, as he is deeply unlikeable and sometimes cruel to Linda, who is loveable from the word go, but O'Leary is entertaining enough, and gives Raymond just enough depth, that we're always willing to go along with him, and even understand at some level why Linda does.

Natural Selection is at times a little schizophrenic; sweary and sometimes graphic (there is some violence, some brief nudity and a clip from Driller Killer), but also sweet natured and gently funny, it's a shame that this may well get quite a restrictive rating in the UK, because I could see it being the sort of gateway drug to more offbeat and interesting cinema that something like Raising Arizona was for me when I was about 13. It's not perfect; there is a moment towards the end that feels far too neat for this otherwise quite wilfully messy series of events, and is entirely predictable into the bargain, but that said, it's extremely well written and played, highly entertaining, and overall just one of the most enjoyable and likeable films I've seen in some time.
★★★★☆
Posted by Sam Inglis at 11:38