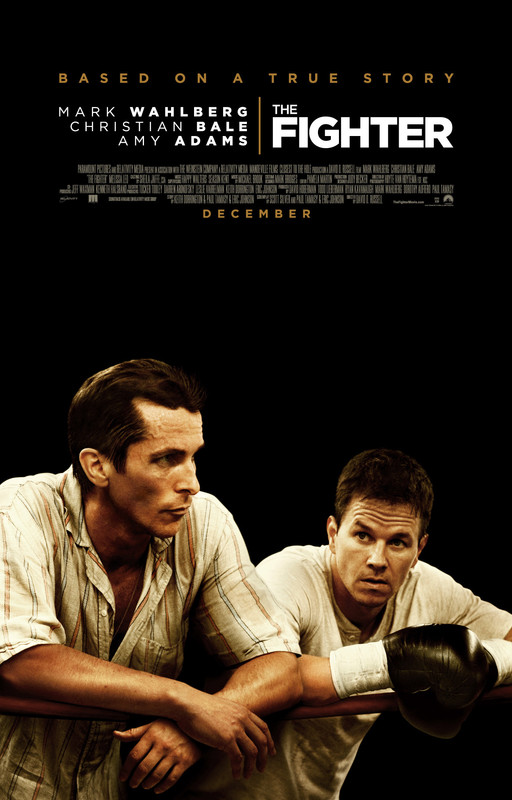 David O. Russell is a unique, idiosyncratic filmmaker, he's a man whose take on the world seems skewed in a way that is genuinely different and refreshing, and he's brought it to life on screen in films like Three Kings and I Heart Huckabees, so it's a real disappointment to see him make something as basic and middle of the road as The Fighter.

There are two archetypal boxing films; Raging Bull and Rocky, most subsequent films on the subject have gone one way or the other; the behind the scenes angst and conflict of the Scorsese or the traditional underdog makes good story of the Stallone. The Fighter attempts to have its cake and eat it by doing both at once. Like Raging Bull the centre of the film is the fraught relationship between two brothers (and, also like Raging Bull, they are real characters and this is a true story). Micky Ward (Mark Wahlberg) is a welterweight boxer in his early 30s who has never quite hit the big time, currently trained by his older half brother Dicky Eklund (Christian Bale), whose career as a fighter is now over and who is in the grip of crack addiction. This relationship is the heart of the film, and for the most part, it is the thing that works best. From Wahlberg (whose remarkable, quiet, performance has been underpraised) you get a real sense of Micky's loyalty to and love for his brother, but also a palpable sense of both his disappointment and his anger with Dicky for potentially flushing BOTH their careers. Bale is also largely excellent, it's clear that Dicky is a larger than life character and obviously, he spends the span of this film in the grip of extreme emotions and substances. For the most part Bale's twitchy, tightly wound, turn is mesmerising, but there are a couple of occasions (generally in scenes with the wider Ward/Eklund family) in which he pushes the boat out just a bit too far, becoming a bit of a cartoon.

Talking of cartoons... Melissa Leo plays Micky and Dicky's brassy mother, a vile woman who seems to want nothing more for her sons than that they be around her all the time. She ignores Dicky's very apparent drug addiction and, though she's his manager, seems to wilfully undermine Micky's career. However, the problem isn't the character, it's how Melissa Leo plays her. Leo is a great actress, and a subtle one (see The Three Burials of Melquiades Estrada, Frozen River and the TV series Homicide for evidence) but here she's turned everything up to eleven in a scenery-devouring monster of a performance. There wasn't a second, not a frame, she appeared in that felt real to me, not a solitary moment that Melissa Leo and her frankly hilarious wig went away and I saw a character. I'm not surprised she's got an Oscar nomination for it, it's exactly the sort of awful showboating that AMPAS loves, but it will be laughable if she wins.

On the other hand, the film's second best supporting actress nomination, for Amy Adams as Micky's fiery bartender girlfriend, is richly deserved. Since Junebug Adams has proved herself likeable and talented, but there has been a question about her versatility, well, she's now answered them. Charlene is 180 degrees from the 'lovely girls' of Junebug, Enchanted and Julie and Julia and Adams is just about flawless in the role. She puts across Charlene's no nonsense toughness effortlessly, meaning that despite her slight build you buy into her ferocity in one key late scene. She's also got convincing chemistry and warmth with Wahlberg, which pays dividends in a funny, sweet, scene that follows their first date.

Though the combination of the more down to earth performances of Wahlberg and Adams with the larger work supplied by Bale and Leo's comic awfulness can create some tonal problems, the dramatic scenes with Micky and Dicky's family often work well, even if there is the sense that we've seen it all before (just because a story happens to be true doesn't mean it isn't cliche).

The other side of the film is the Rocky-esque stuff; the training montages, the fights themselves, and again it's not so much that this is badly done, more that it's been done so many times before, and there's little sense that O. Russell has found anything new to say or do with it. The fact that the fights are shot to look like HBO coverage (even going so far as to use the same cameras as HBO used in the early 90's) is a nice touch, but for the most part these sequences feel like compilations of O. Russell's influences rather than something coming from him.

I didn't hate The Fighter, there are things about it that I admire, but overall the film left me cold. If I really want to see a film about two brothers involved in boxing then I'll just go and watch Raging Bull again. Even recently there has been a much more edifying film about the sport; Fred Wiseman's mesmerising documentary Boxing Gym, which, with none of the histrionics that The Fighter often falls prey to, and none of the clichés either, says more about this sport and its practitioners in five minutes than this film manages in a hundred and fifteen.
★★☆☆☆
Posted by Sam Inglis at 10:53