Boy (Cusack) meets Girl (Skye). Boy and Girl fall in love. Girl gets scholarship to England. Girl's Father (Mahoney) makes her feel guilty about spending time with Boy. Boy loses Girl. Boy plays Peter Gabriel's In Your Eyes outside Girls window. Can he get her back?

Almost all you need to know about this most atypical of teen movies is in that line, the emotion, the offbeat humour and the brilliant, brilliant dialogue come together perfectly in that moment to make it the most memorable line in a film packed with them. It's no surprise that the chief asset of Say Anything is its dialogue as it is the directorial debut of Cameron Crowe. Crowe became a journalist for Rolling Stone at just 15, in his early 20s he returned to high school and wrote the book Fast Times At Ridgemont High before having his first experience with film by writing a screenplay based on that book. 7 years later he produced this, set in the same world but with a totally different tone and style Say Anything is a sign that Cameron Crowe grew up in those 7 years.

Crowe's greatest strength as a writer has always been in creating complex, individual characters and here he does some of his best work in that respect. Lloyd Dobler (Cusack) is a million miles from the stereotypical guy of teen movies (as his friend Corey (Taylor) says to him: "Be a man, don't be a guy"). He is intelligent, thoughtful, funny and seems to have it all worked out. One does wonder where Lloyd might have ended up though since kickboxing proved not to be the sport of the future as he hopes. What defines Lloyd though is his feelings for Diane (Skye) as evidenced by what he says to her father at the end of the film "...Cause I figured out what I really want to do with my life, what I want to do for a living is I want to be with your daughter. I'm good at it". I've heard many girls name Lloyd as an ideal boyfriend and that is a huge achievement on Crowe's part. John Cusack has, to some degree, played Lloyd ever since, there is a lot of the cynical side of the character in his portrayal of Rob Gordon in High Fidelity. He should not complain though, this is an iconic part and he does it full justice with a subtle performance that is still the best of his career almost 14 years on.

Ione Skye matches Cusack at every turn with a charming performance as Crowe's 'golden girl' Diane Court "A brain. Trapped in the body of a game-show hostess" according to Lloyd's friends. Its difficult to talk about either Cusack or Skye giving performances because they are so convincing that rather than thinking what great performances they are giving you simply watch the characters. It is easy to see why Lloyd and Diane are attracted to one another, even leaving aside Skye's classical beauty.

I can't possibly talk about this film and not mention music. One piece in particular, perhaps the best use of music in cinema history. The moment, illustrated on all the posters for the film, when Lloyd stands outside Diane's window, holding a stereo above his head. Peter Gabriel's beautiful song In Your Eyes playing at full volume. That scene tells you everything about how the characters are feeling without spending pages and pages of dialogue to do it.

There isn't a bad performance in the film. Eric Stoltz pops up in a cameo as Valhere (a role he reprised in Jerry Maguire) and puts in an entertaining, if very broad, comic performance. Lili Taylor excels as Lloyd's friend, who has written more than 50 songs about her ex boyfriend, and John Mahoney proves he is as good at drama as his is at comedy (he played Martin on Frasier). Joan Cusack, John's sister, in a stroke of (now endlessly repeated) casting genius plays Lloyd's sister.

It is obvious that this film was made by a debuting director, not that there is anything wrong with how it is shot, just that all the camera does most of the time is capture the action, rather than draw it. In a film like this though Crowe doesn't need flashy camera work and special effects he just needs to get his wonderful script up on screen and does so perfectly well.
This is a brilliant film, ludicrously classified 15 and perfectly suitable for younger people. A perfect first date film (and if your date doesn’t like it… don’t bother with a second). 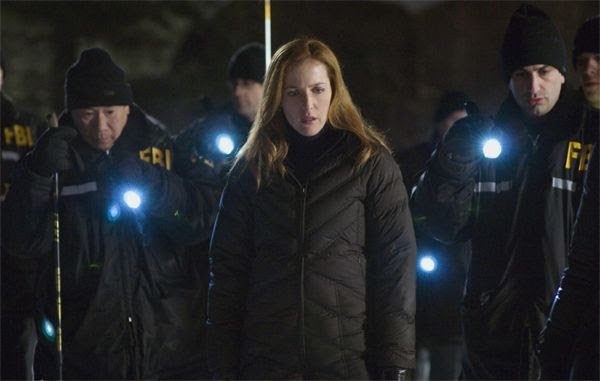 I’m a sceptic at heart; when people make scientific or supernatural claims I want to see them backed up with evidence rather than take them on faith. In other words I’m a Scully. With this movie though I found myself identifying with Mulder more. I WANT to believe. I want to believe that, after six years, this isn’t really what Chris Carter has come up with for the second X Files movie.

Sadly the evidence suggests otherwise. The main problem with this fundamentally broken movie is that there is no compelling reason for it to be an X Files movie. Mulder (Duchovny) and Scully (Anderson) do little of consequence and neither ever does anything you believe only they would, or could, do. This is a major problem because the entire plot revolves around Mulder (who apparently ended the TV series on the run, under a sentence of death) being invited, through Scully, back to the FBI to help determine whether the information being given by a paedophile priest (Connolly), who claims to be psychic, regarding the disappearance of an FBI agent, can be trusted. Several problems arise from this; first of all are we REALLY supposed to believe that an advanced law enforcement agency like the FBI doesn't have a: people who are trained to determine whether someone is lying, and for what reasons or b: the most advanced lie detecting technology available? Even if we are supposed to believe this, and assuming that we do, Mulder does nothing more than ask the most basic, common sense, questions of Connolly, declare that he’s inclined to believe him (shock) and stroke his messy beard. And for THAT Mulder gets a clean sheet? The X Files wildest conspiracy theories stretched credibility less.

Leaving aside the fact that the film is wildly unbelievable it simply doesn’t work, and that’s all down to the script by Carter and long time X Files writer Frank Spotnitz. To their credit they try to move Mulder and Scully on in their lives, six years have passed off screen and on, but they do it in the most ham fisted and poorly realised of ways, and only end up muddling the characters and their relationship. That relationship is clearly sexual, but there’s no spark between the characters, none of the snappy sparring dialogue that marked the best episodes of the show. The script is also unclear about how Mulder and Scully live, which means that a moment when Scully says she won’t be coming home falls completely flat, because you were never even sure that they lived together (indeed the idea that they would, with Mulder on the run, makes them seem far less intelligent than they are supposed to be).

There are no fleshed out characters here. Billy Connolly’s priest could have been really interesting, but the film never truly delves into the origins of his visions and what they mean and the characters past crimes have little bearing on the plot, a shame because there is plenty of potential there for something truly scary. Instead Carter and Spotnitz content themselves with the thought that they are doing something terribly interesting and groundbreaking merely by not treating this character entirely as a villain. Similarly Amanda Peet and Xzibit are given ciphers to play as the FBI agents who recruit Mulder (why, exactly, is Scully in this movie again?) to the case. Neither ever develops any personality, and neither has a single memorable frame of screen time.

Perhaps worst of all is the terrible sub plot involving Scully’s treatment of a young boy with a terminal brain disease. Not only does it simplify Scully to ludicrous degrees (a supposedly brilliant doctor, preparing to give a presentation on the groundbreaking new treatment she intends to try on her patient researching her case by printing every item that comes up on the google search “stem cell treatment”) but it clearly exists solely to make a political point, but sadly Carter and Spotnitz can’t settle on what that point is.

Amid the awfulness there are a few glimmers of light. The reliably excellent Duchovny and Anderson try their hardest and both give remarkable performances given the shocking dialogue, the terrible characterisation and the overwhelming feeling that the whole endeavour is utterly pointless. Billy Connolly is also better than the film deserves, giving a quietly sad performance as a man who has been trying to apologise to God for half his life.

That’s all the good news though, and the bad news just doesn’t stop coming. At $29 million this is a very cheap movie, particularly for the summer, and it looks it. Sets are drab, lack detail, and feel fake, the cinematography is murky, the few effects are cheap and less than special and the supporting cast seems to have been recruited from TV’s worst guest stars. All in all it adds up to something that feels like a barely developed afterthought rather than the revisiting of a much-loved franchise. The X Files is now dead, and it’s a crying shame that this mess of a movie is its epitaph.
Posted by Sam Inglis at 16:29

Labels: Film reviews, From the Archives