The Week in Movies 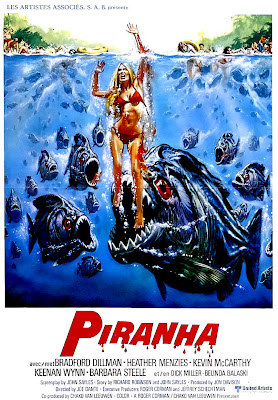 This long dormant franchise is soon due to give birth to a new - 3D - instalment directed by Alexandre Aja, so I thought it would be a good time to check out the first two films.

Joe Dante’s Piranha, with a screenplay by John Sayles, isn’t an especially upmarket or intelligent film. In fact it is silly and exploitative, with some ropey effects and pretty bad acting, but it’s also a great deal of fun. Dante has always been a witty filmmaker and Piranha is a very funny film, with plenty of knowing nods to other movies (of course the whole thing is a Jaws rip off). Because Dante, Sayles and the cast keep their tongues shoved firmly in their cheeks this is a real treat, if you’re in the right mood.

Piranha II is most notable, no, scratch that, ONLY notable, for being the directorial debut of one Mr J. Cameron, who has since made a few movies you might have heard of. Unfortunately, Flying Killers isn’t one of those cheap debuts that exceeds expectations, and reveals a talent in waiting. It’s just shit. The screenplay and direction lack the knowing tone that made the first film such fun and the effects (by Lucio Fulci’s frequent collaborator Gianetto Di Rossi) are, sadly, dreadful. Oh, and the acting is so bad it’s actually rather funny. Both these films are crap, but only the first is fun, entertaining crap.


Not the Messiah: He’s a Very Naughty Boy (PG)
Screened in cinemas for one day only, Eric Idle’s operatic version of The Life of Brian was, frankly, often just a bit odd. There’s little staging, so the visuals tended just to be the singers standing in place and delivering the songs (though they did some acting as well, and I was surprised at how adept and funny they could be), but the more pressing problem was that the laughs too often stopped dead during the songs. The songs are beautifully crafted, clever parodies of both pop and classical styles, but the lyrics just weren’t funny in themselves, so much of the time it’s a three minute wait for the next joke.

There were a few exceptions to that rule, notably an excellent doo wop parody and the very rude Amourdeus. Most of the rest of the jokes were drawn verbatim from the film, and delivered with obvious enjoyment, but the only time I had a real belly laugh during the whole 90 minutes was the first time that Terry Gilliam appeared. A fun curio, but less engaging than it should have been. 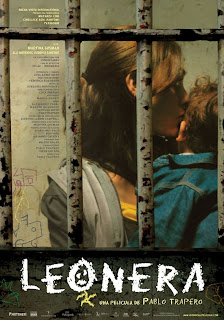 Argentinian actress Martina Gusman is outstanding in this otherwise rather ordinary prison drama. Gusman plays Julia, a young woman imprisoned for the murder of her boyfriend. We never know the story behind the crime, though the film seems to infer that she’s not, or at least not entirely, guilty. When she arrives in prison Julia is pregnant, and she’s allowed to keep her son, Tomas, with her until he is four, and live on a wing with other mothers and their young children.

This is a part of the problem, because I didn’t really buy into Trapero’s depiction of prison, which, for the most part, he seems to suggest is a holiday camp with razorwire. What does play, through Gusman, is Julia’s fierce, almost obsessive, love for her child but outside of that the film plods a little, treading a familiar narrative path (complete with risibly unrealistic ending), and it never completely engaged me.


Air Force One (15)
DIR: Wolfgang Petersen
Harrison Ford as an ass kicking US president, fighting Gary Oldman’s Russian terrorist, on board Air Force One. It’s stupid, overblown and schematically written, but really, what’s not to like? Big, dumb, fun.

This acclaimed spin off of the Batman animated series was a real disappointment on this rewatch, some years after I had last seen it. The voice work is excellent, and the character design bold and appealing, but the animation is pretty unimpressive, and lacking in fluidity. On top of that, the story, despite just a 73 minute running time, is actually rather dull and slow moving. The film wins points for the sequences with Mark Hammill’s hilarious Joker, but otherwise I was disappointed this time round. 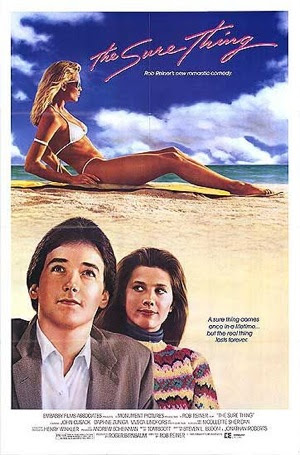 Why doesn’t everyone love The Sure Thing? I mean, really, it’s Rob Reiner’s second film, made between gold standard classics This is Spinal Tap and The Princess Bride. It stars John Cusack, just before Say Anything, and it’s that rare thing; a romantic comedy that is not only funny, but manages to grow the relationship between its two main characters (Cusack and the cute Daphne Zuniga) in a believable way. Essentially, The Sure Thing is a raunchier, 80’s set, remake of It Happened One Night with Cusack’s character not a journalist travelling in pursuit of a story but a college student going to California to be set up by his friend with a dream girl (the titular Sure Thing). The film is consistently hilarious, thanks to the excellent chemistry between Cusack and Zuniga and to their energetic performances. There are also some nice supporting turns, notably from Tim Robbins as “Gary Cooper, but not the Gary Cooper that’s dead”.

If you haven’t seen this terrific, sadly underseen, movie I really would highly recommend that you pick it up and give it a chance.
Posted by Sam Inglis at 12:36