Daybreakers has, it must be said, a rather cool premise; most of the world’s population have become vampires, so many in fact that there are now too few humans to provide enough blood for them to live on. At a leading blood bank Edward Dalton (Hawke) is working on a blood substitute, while outside the vampire army attempts to round up both the last humans and the creatures that vampires have become after being deprived of blood.

For a little while it seems that Daybreakers is going to be interesting, a real twist on the vampire genre, with Edward fighting to find his blood substitute and save his race and us the audience rooting for a set of characters who are usually the villains. Sadly writer/director brothers Michael and Peter Spierig abandon this potentially interesting idea early on, in favour of a rather formulaic (to say nothing of illogical, but we’ll get to that) story about Edward teaming up with a group of humans (including Dafoe and Karvan) to find a cure for vampirism.

On the plus side, though its familiar, ‘borrowing’ from the Blade series and The Matrix films in particular, the film looks pretty good. The action is intelligibly executed, the cinematography and production design are polished and there are some nice ideas here (like the subway coffee stand serving lattes with blood). The CGI is often obvious, but the Spierigs (who also did some of the digital work here) do an acceptable job on what can’t have been a large budget.

Some of the performances are also pretty solid. You have to look hard to find a bad performance on Sam Neill’s resume (a bad film, well, that’s another matter) and he has a good time here chewing both scenery and the occasional neck as a vampiric CEO. It’s not great dramatic work by any means, but it is entertaining. The same can be said of Willem Dafoe, whose character is the key to the potential cure, there is little asked of him as an actor, but he’s clearly enjoying himself and that does sometimes translate to the audience.

Of course, this is the very definition of damning a film with faint praise, and sadly that’s all that Daybreakers warrants. The Spierig brothers may be technically efficient filmmakers, but they never stamp any real identity on this film. I can see Guillermo Del Toro in it (the subsiders), I can see Andrew Niccol (whose Gattaca, also starring Ethan Hawke, is ripped off on a huge scale), I can see the Wachowski brothers (the very Matrix like human blood farm), but I can’t see anything that seems unique to the Spierig brothers.

Though Sam Neill and Willem Dafoe are pretty good, there is a huge amount of terrible acting on display here. Ethan Hawke, who can be excellent and is generally underrated as an actor, is absolutely dreadful, appearing almost catatonic and delivering his lines in a bored monotone that says ‘can I have the money, so I can get back to working with Richard Linklater now?’ Up and coming aussie Isabel Lucas proves that it wasn’t simply Michael Bay’s monumental shittiness as a filmmaker that made her come off as a talentless husk in Transformers: Revenge of the Fallen, with a performance so wooden that you could fashion it into a whole bag of stakes and kill vampires with it and Claudia Karvan, beautiful distraction though she is, adds little and struggles with her American accent.

The biggest problem is the screenplay. First of all, the goal makes little sense. In beginning to cure vampirism all that the ‘heroes’ really achieve is a LOT of death, and all they’ll really succeed in doing is creating a larger human population for vampires to live on. Good plan. Secondly, the way the cure comes about makes absolutely no sense, either in vampire lore or in the context of this film. But this pales in comparison to the major issue. This film is all middle. It is hard to become invested in a story that really has no beginning (we never find out anything about the epidemic of vampirism, or even really about this movie’s form of vampirism), or to care when the credits roll on a film without an ending (things are deliberately left open for, one assumes, a sequel we will never see). So there it sits; a marooned second act in a not especially interesting story. It’s not awful, but it certainly isn’t any good either.

With a debut film a lot of filmmakers set themselves limitations, so that it is easier to finance their screenplays and to realise them on film. A lot of new talent seems to take its first bow with a single room thriller, and so has British writer/director Stuart Hazeldine. Exam sees eight people; four men, four women sit down for a test, the last step in a long recruitment process for a job they all desperately want. They are told that they have eighty minutes to find the answer to the one question before them, but when they turn over their exam papers they are blank.

This is an intriguing mystery to begin a film with, but the intrigue soon becomes played out as the group try everything they can to find the question to no avail. This part of the film is almost episodic; try this for five minutes, argue for five minutes, try the next thing for five minutes. It feels a little like screenwriting via a join the dots book. After about an hour of this Hazeldine seems to worry that the audience will be getting fidgety, so from nowhere he decides that Exam needs both a torture scene and an action sequence. Both feel entirely out of place, and grafted on to sate either a producer or an audience.

Even apart from this rather plodding structure there are greater problems with the script. Most pressing is that it simply rings false. This is especially felt in the way the film ekes out its backstory. Everything is kept deliberately vague, to little purpose. Everybody speaks in pronouns “The company”, “The CEO”, “The virus”. Exam is set ‘soon’, apparently in a future where nothing has a name. It’s weird, distracting, theatrical and distancing. It’s also silly, because there’s nothing very interesting hiding behind the conceit.

In fact the whole of this film feels like theatre. The largely unknown cast is stuck with pretty poor dialogue, but they all deliver it in a forced, deliberate tone that suggests they are talking to an audience rather than to one another. This theatrical feel isn’t helped by the single, rather drab, set on which the entire film takes place. Hazeldine tries to introduce some variety with the lighting, but the film looks rather boring. If it’s not theatre then Exam is a short film. There’s enough material here for a brilliant, suspenseful, 20 minute short, but Hazeldine has elected to show the test in real time, and that leaves him desperate for incident and stretching every scene.

The best thing that can be said about Exam is perhaps that you’ll kick yourself when the question, and its answer, are finally revealed, but I never felt that finding out was worth the 90 minutes I’d invested in the movie. 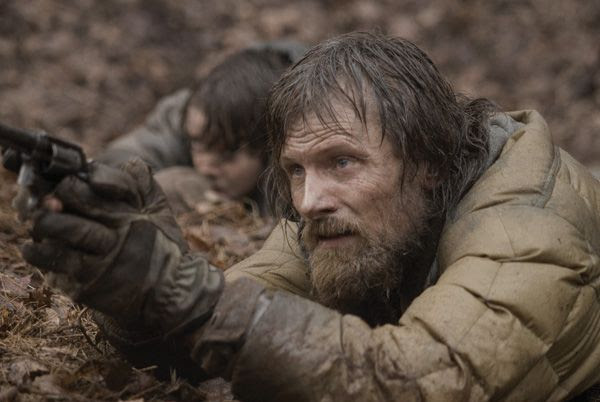 The Road is unquestionably a beautiful thing to behold. Its images of a devastated and dying world, a world drenched in dust and ash, a world almost devoid of life; human or animal, are genuinely stunning. However, though the film constantly strives to make an emotional connection with us I only felt one in a couple of isolated scenes and found myself largely unengaged by the long second act which comprised almost the entire story.

I don’t know quite how to explain my reaction to this film, because there is very little obviously wrong with it. As well as looking stunning it features two excellent central performances from Viggo Mortensen and debuting youngster Kodi Smit-McPhee. Mortensen, behind straggly hair and a messy, bear like, beard is excellent as man trying desperately to spend his last days finding something, somewhere, which will allow his young son (Smit-McPhee) just a tiny glimmer of hope for a future. There is determination in Mortensen’s voice and physicality, but behind his eyes we can see the sadness for what he’s lost and has yet to lose. It’s a layered and subtle piece of work. Kodi Smit-McPhee is also outstanding, and the two scenes in which the film really got me, really connected with me both focus on the Boy at his most emotional. One especially, when the Man holds a gun to the Boy’s head, trying to find the strength to fire, is almost unbearably raw, because both performances are so real.

I’m not sure what it is with Viggo Mortensen and films about walking. In The Lord of the Rings he spent 9 hours (12 in the extended versions) making sure Elijah Wood could walk to a mountain, and now here he is walking to the sea. Like Lord of the Rings, this film has an episodic structure, which sees Man and Boy going from place to place and person to person. The problem here is that there is an avoidance of incident. On occasion (as in a tense scene when Man and Boy have to hide from ‘bad guys’ in a house they thought was abandoned) this leads to some thrilling sequences, but more frequently I simply found it frustrating that there wasn’t really much happening, in fact I found myself almost nodding off at times.

While Mortensen and Smit-McPhee are excellent none of the few other actors in the film come up to their level, to be fair that’s probably because their characters simply aren’t fleshed out, because actors like Robert Duvall, Charlize Theron and Michael K Williams are capable of a great deal more than the rather flat, thin work that they do here. Talking of flat, the only real flaw in Mortensen’s performance is the voiceover, which is delivered with little of the weight of his dialogue, as if he has very little enthusiasm for it. I can see why he might be unexcited by it though, as, like the flashbacks with Theron’s character, the voiceover is almost totally redundant.

Despite a couple of brilliant scenes (the aforementioned bathroom scene, and a heartbreaking scene on the beach towards the end of the film) I found myself unengaged by The Road, and really feeling its length (which, for a sub two hour film, really ought not be the case). I can accept that it may just have caught me on the wrong day or in the wrong mood, because there are a lot of strong parts here, but for me, at least this time, they never added up to a whole that connected with me. Overall this was, for me, an aesthetically impressive film, but a curiously distancing and slightly dull experience.
Posted by Sam Inglis at 12:04