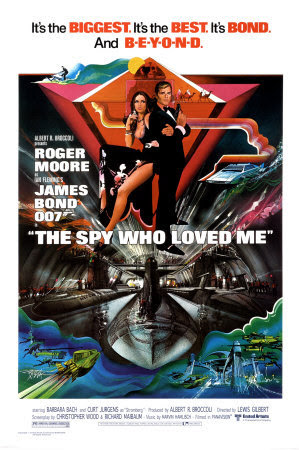 Roger Moore, the longest serving Bond, probably the most divisive, and the one I’ve seen least of - just one film prior to this week. Moore’s films have a reputation for being campy, and though there are certainly flashes of this in The Spy Who Loved Me (“keeping the British end up, sir”) those problems are outweighed by the film’s many virtues.

The film gets off to a roaringly exciting start, with a strong action sequence which culminates in a jaw dropping stunt with Bond skiing off a mountain, freefalling and then opening a parachute. Today you’d probably do that stunt with a CGI Bond; here a stuntman skis off a mountain. It is absolutely astonishing. This leads into a title sequence featuring one of the series’ finest title songs and then a pacy subsequent 75 minutes of high class action and thrills. Moore, at 50, is looking a touch weather-beaten, but he’s still pretty spry and he executes the action scenes, especially those where he faces off against Richard Kiel as the menacing metal-mouthed mute Jaws, with energy. The choreography is also pretty good, and Jaws is made to feel like a real threat, with his blows looking like they connect and hurt.

Barbara Bach, as Russian agent Anya Amasova, isn’t much of an actress, which is a bit of a shame because while she’s very pretty an actress with a little more depth could well have made Anya one of the great Bond girls. As a secret agent herself, and working with Bond only for her own ends, Amasova is an intriguing character, but Bach lacks the resources to play the layers of the relationship between herself and Moore’s Bond and ends up playing more of a decorative role. Curt Jurgens’ Stromberg isn’t the most memorable of villains, but his plot is rather original and intriguing, particularly now, when climate change seems to be beginning to bite.

Overall though The Spy Who Loved Me is a very solid Bond film. Moore is pretty good here, he even scores with several of the one-liners that are usually my least favourite aspect of Bond movies in general, and which marred the otherwise rather entertaining Live and Let Die. He’s by no means the almost psychotic Bond of Dalton and Craig, but there’s a slightly harder edge to Moore than he’s usually credited with, and he does seem more secret agent than playboy here. The action is excellent, and well directed by Lewis Gilbert. Aside from that opening there’s a strong fight with Jaws around an Egyptian ruin and the storming of Stromberg’s control room, from which he’s attempting to destroy the world, results in a lengthy but exciting and, in a touch that has now become rather rare, intelligible, gunfight.

My only major issue with the film is that it runs a little long, and begins to run out of steam in the last twenty minutes or so, at which point the evil plot has already been foiled. That said, a hundred minutes of solid entertainment is pretty good, and I enjoyed this film more than I expected to.

Next Up: The World is Not Enough
Posted by Sam Inglis at 13:14