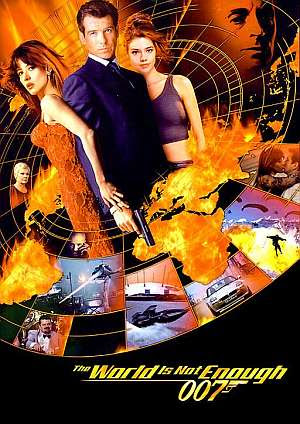 I was going to watch Die Another Day, the only Pierce Brosnan outing I haven’t yet seen, today but my VCR (yes, VCR) ate the tape and so I went to this film, and I’m glad I did. Every time I look at The World Is Not Enough I enjoy it more. Brosnan’s third crack at the Bond whip isn’t without its faults; Robert Carlyle’s bad guy is poorly defined, and totally unthreatening, Denise Richards is laughably cast as nuclear physicist Dr. Christmas Jones and the one liners are often painful (“I thought Christmas only comes once a year”) but, conspicuous as these faults are, they don’t take much away from what is a hugely engaging and entertaining film.

Michael Apted was brought into the Bond fold in order to punch up the film’s performances, and he’s succeeded admirably. Leaving aside the awful Denise Richards there’s not a bad turn on display here. Brosnan appears much more comfortable in the role than in his first two films, like he has now found a way to make it fit better, it’s evident in his interaction with other actors, notably Judi Dench’s M and in the fact that he’s able, in Bond’s relationship with Sophie Marceau’s Elektra King, to give the character a little more depth. The star attraction though is Sophie Marceau. Quite apart from being mind-blowingly attractive, Marceau is a proper actress; someone with major talent to back up the kind of looks that make her, with the possible exception of Jane Seymour, the single most beautiful Bond girl. Elektra is a strong role; while Richards is stuck with a very basic damsel in distress role, Marceau has layers, complex motivations and an interesting psychology to play. She does it brilliantly, giving a performance that is even richer the second time you see it.

This is not to say that the film skimps on the action. Apted and second unit director Vic Armstrong have crafted some tremendously exciting action sequences, from the opening boat chase down the Thames to the Millennium Dome to the attack on Zukovsky’s (Robbie Coltrane) Caviar factory by two helicopters each wielding several massive circular saws, there’s enough action to sate any fan, a great deal of it very obviously practically realised. Brosnan makes for a solid action hero; outwardly tougher than Moore and Dalton, he’s the most convincing Bond in action scenes since Connery. Like The Spy Who Loved Me, The World Is Not Enough starts to run out of steam in its last fifteen minutes or so, mainly because Robert Carlyle’s Renard isn’t developed or scary enough to make for a credible threat at the end of the film, otherwise, this is an underrated movie, it has plenty of problems, but is never undone by them and so far it’s one of my favourite Bonds.

Next Up: For Your Eyes Only
Posted by Sam Inglis at 17:48