I’m sorry that this post is late. Our local telephone exchange has been down, and for almost 24 hours we’ve had no internet service. 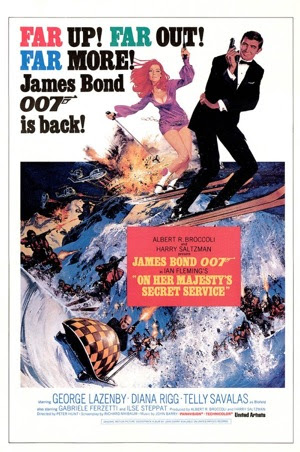 I have often said that, given a decent budget and a proficient crew, just about anyone can make a technically competent movie. Clearly I had not reckoned with Peter Hunt. Had it been competently made parts of OHMSS might have been fun, but as it is Hunt’s stylistic choices and the hideous botching of several technical issues make the film a real chore to sit through. The first problem is the action. All of the hand to hand fights (and there are many) are abysmally choreographed, with blows that never seem to connect, they are all dubbed with sound effects - both impact noises and Bond and whoever he is fighting breathing heavily, to show how much they are exerting themselves - that would seem outrageously over the top in a Jackie Chan movie, but these are the least of the problem with fights. Every fight scene is sped up. I named this website for the speed at which film runs through a camera to create the illusion of movement, but during the silent era films were often shot at 16 FPS. Some DVD releases fail to take account of this discrepancy, leading to movements seeming sped up and jerky. This is what appears to have been done with most of the action in OHMSS, and it is an unmitigated disaster, not just lessening the impact of the action but rendering it comical.

Other technical elements are also botched. The editing, by Bond director in waiting John Glen, is a complete mess. The first ski chase sequence is particularly terrible, with shots of new Bond George Lazenby and his stunt double not only utterly failing to match, but so disconnected that the sequence makes barely any sense. Then there’s the soundtrack. The music, though John Barry’s score is fine, is obnoxiously used; played so loud it dominates many scenes and used less as score than as instruction. Worst is the looping, oh dear god, the looping. It’s standard practice to re-record dialogue and match it to the pictures after the fact, but never - except perhaps in Lucio Fulci’s House by the Cemetery - have I heard it done worse. At one point during a car chase Diana Rigg ‘speaks’ while on screen she is facing the camera, open mouthed with fear and shock and clearly not speaking. There are several of those moments, but that one is just so blatant that it made my jaw drop to see that it had been left in a professionally made film. I saw better looping at a screening of short films made by the 17 year old students I had film studies with last year.

I wish that On Her Majesty’s Secret Service had merely been a technical failure, but sadly it disappoints on just about every level. The thrills are almost totally mitigated by the appalling editing and action choreography, and in between those sequences the film is both boring and seemingly interminable. The sequences at Blofeld’s (Telly Savalas; less megalomaniac than slightly creepy uncle) are just endless, and provide nothing in the way of thrills and even less in the way of comedy. Add in a totally unconvincing romance with gorgeous Bond girl Diana Rigg (who, to be fair, is the best actor and the best character in the picture; a tough, spunky Bond girl long before that was expected) and the stunning woodenness of Lazenby himself, and you’ve got a horrible, tedious, mess of a movie.