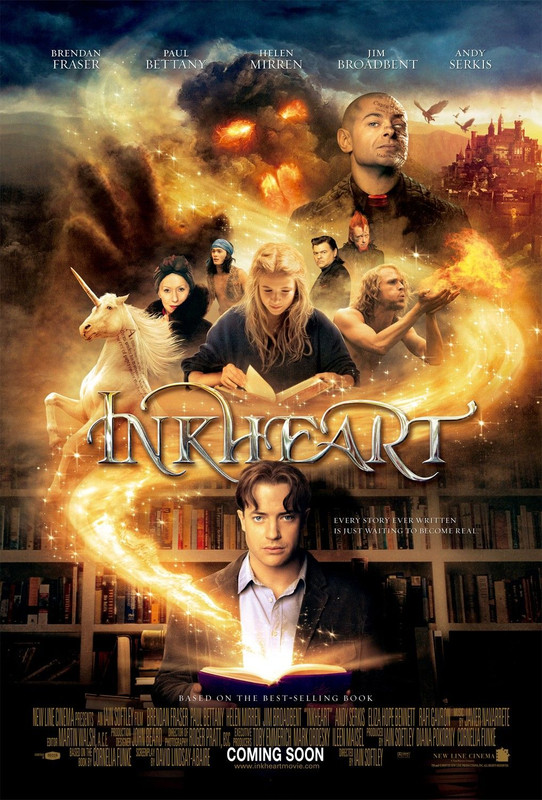 Over the last 14 years Brit Iain Softley has had a schizophrenic directorial career. He’s made everything from cyber thrillers (Hackers) to ghost stories (The Skeleton Key) Inkheart is his first crack at a family film, and it’s a solid, entertaining effort.

Based on a novel by German author Cornelia Funke, Inkheart tells the story of Mo Folchart (Brendan Fraser), a man who discovers that when he reads aloud things and people are transported out of the fictional world and into ours, but at a cost, because for everything that comes out of a book something from our world is transported into it. This causes Mo to lose his wife, as she is trapped in a book called Inkheart as he reads it to their daughter. 9 years later Mo and his now teenage daughter find another copy of the book; Mo intends to use it to find his wife but characters from the book, including fire juggler Dustfinger (Paul Bettany) and the evil Capricorn (Andy Serkis) mean to use Mo and the book for their own ends.

Family films tend to fall into one of two categories these days – films about things farting and falling over (be they ogres, people or male cows with incongruous udders) and films for adults, made to a PG certificate so they can take the kids – but this is one of that all too rare breed of family film which is both genuinely for the whole family, and extremely good into the bargain. Many fine family films are about storytelling; The Princess Bride, Bridge to Terabithia and now Inkheart among them, and the storytelling here is appropriately strong. It’s not especially nuanced; the bad guys are hissable, the good guys virtuous, but it’s entertaining and well told.

The cast acquit themselves well, after a terrible year which has taken in the awful The Mummy: Tomb of the Dragon Emperor and the underwhelming Journey to the Centre of the Earth 3D Brendan Fraser may not exactly be stretching himself here, but he’s doing what he does best; the charming slightly flustered hero, and he continues to do it well. Paul Bettany gives the film’s best performance, a layered turn as Dustfinger, transported out of the book and desperate to return to his wife (played, in a couple of shots that scream sequel, by Bettany’s real-life wife Jennifer Connelly).  Bettany brings real weight to Dustfinger’s arc, making him sympathetic despite his shifting morals. Three more Brits contribute highly enjoyable scenery chewing turns; Helen Mirren has fun as Fraser’s wife’s aunt, while Jim Broadbent is great as Inkheart’s author (especially when, menaced by one of his own creations, he gleefully says “isn’t he awful”). It’s Andy Serkis who comes close to stealing the film though, amusingly and joyously evil as Capricorn, he relishes the part, mining it for many laughs. Kids are often a problem in movies but Eliza Bennett acquits herself perfectly well as Fraser’s daughter Meggie, and she’ll get a chance to grow into the role provided the other two installments in Funke’s trilogy get the green light.

At its core Inkheart is a rattlingly good adventure movie, with a particularly well-realised set piece at the end, involving some quality CGI. But, and this is what I wish more of these movies would realise, the set pieces and the CGI aren’t the be all and end all of the movie; It’s driven by characters, by plot, it’s not just sound and fury. Iain Softley doesn’t put much of a personal stamp on Inkheart, but then this is hardly an auteur’s film, it’s mass entertainment, and Softley’s bright visuals, the capable if broad performances he draws from his stars, and his sense of story and character over effects make it highly engaging and enjoyable entertainment.
★★★
Posted by Sam Inglis at 13:45