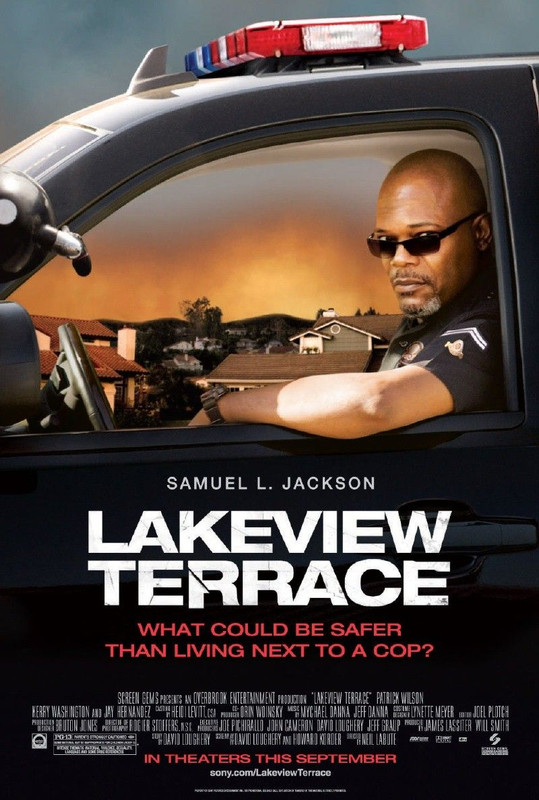 In the late 80’s and early 90’s there was a boom in yuppie horror. Home invasion thrillers like Pacific Heights, Single White Female and Unlawful Entry were everywhere. Neil LaBute’s latest isn’t so much informed by those films as it is an uncredited, racially charged, remake of Unlawful Entry. The setup is simple; interracial couple Chris and Lisa Mattson (Patrick Wilson and Kerry Washington) move in to the titular neighbourhood and clash with Abel Turner (Samuel L Jackson), a black police officer who lives next door.

LaBute has much to redeem himself for, his last film having been the sacrilegious remake of The Wicker Man. Well, Lakeview Terrace isn’t laugh out loud bad, but neither is it much good. The problem is not so much that it’s badly done. It’s simply that everything is so rote, so predictable, and therefore devoid of the tension it clearly wants to contain. LaBute directs with his head down, perhaps trying to go unnoticed, crank this director for hire gig out so he can be allowed to do something more personal again next time.  This is the wrong approach, as with LaBute’s trademark caustic dialogue Lakeview Terrace might well have packed more punch than it does.

The actors do solid work. Patrick Wilson impressed in Hard Candy and Little Children, and he’s fine here, though he’s never really challenged. Kerry Washington, similarly, does nice work, but within such limited parameters that she never really gets to impress. Samuel L Jackson could make a justified claim to be one of the most naturally gifted actors of his generation. At his best he’s electrifying, but for too long he’s been willing to coast and here, again, he plays Samuel L Jackson. Abel is not a well-drawn character; he’s only ever depicted at extremes; overly friendly, or simply unhinged, but Jackson is capable of sketching in the details himself. He doesn’t, instead relying on sheer force of personality. It’s sometimes fun to watch, but it’s never Abel Turner that you’re watching, or even Jackson playing him, it’s Samuel L Jackson.

Though the screenplay is so obvious that even a blind man could see where it’s heading the setup is relatively well done. Early scenes where Abel makes veiled threats to Chris work to establish a subtle level of menace and there’s an excellent scene at Chris and Lisa’s housewarming party that feels like it comes from a different film, because both the dialogue and the acting improve for its five minute duration.

Sadly Lakeview Terrace veers off the rails quite fast. Perhaps if it had embraced its B-movie nature more fully, gone to more extremes, this might have been more fun, but even at its end this is a very quiet film, going out with a whimper rather than a bang.
★★
Posted by Sam Inglis at 13:48