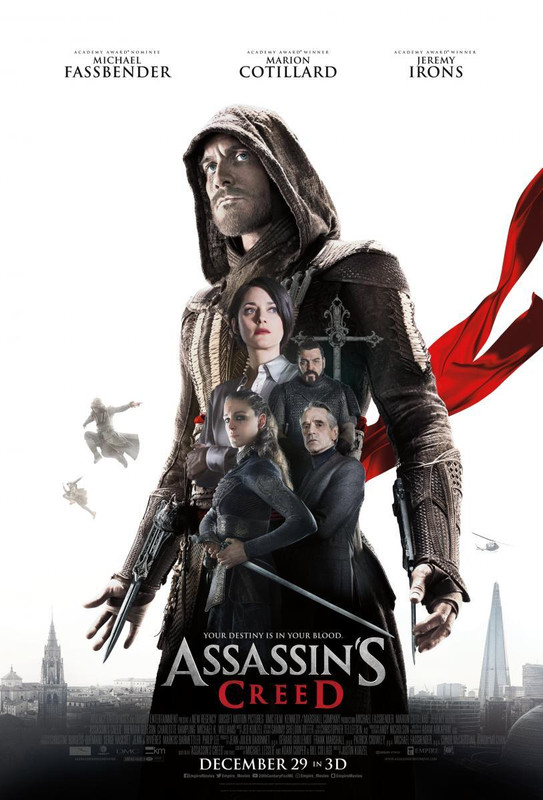 I often find myself asking "what's wrong with mainstream Hollywood cinema right now"? The answer is complex and multi-faceted, but I think I can now boil it down to two words: Assassin's Creed. This borderline unwatchable film epitomises so many of the problems I have with mainstream cinema right now that it almost seems to have been made as a how not to guide for other filmmakers. It is as fundamentally broken as any film I've seen recently, and yet its most frustrating aspect is how easy it is to see how it could be at least partially fixed.

Not having played any of the Assassin's Creed games, I don't know how accurately the film represents them, but even if it is extremely unfaithful to the series that, I'm confident, is the very least of the film's problems. One of the larger problems is the screenplay, which manages a trick you would imagine was difficult, but is all too often achieved; being insanely intricate and complicated, but also  dumber than a box of rocks.

Michael Fassbender plays Callum Lynch, a death row prisoner who wakes up from his 'execution' to find that he's in a facility where scientists led by Marion Cotillard's Sofia want to plug him into a machine called the Animus. Using this machine they will allow (read force) Cal to experience the memories of his ancestor, an assassin named Aguilar, in order to find the Apple of Eden, which supposedly contains the genetic code that will allow control of humanity's free will. How will this genetic code actually be used? Here are some keys, watch them jingle. The intricacies of this plot dictate that roughly 97% of the dialogue is unspeakable technobabble. The other 3% is the phrase "Apple of Eden" and no, it never sounds any less silly.

Fassbender and Cotillard are merely the tip of an overqualified iceberg when it comes to casting. Other unfortunates chewing their way through the dialogue include The Babadook's Essie Davis, brilliant French/Greek actress Ariane Labed, Michael K. Williams, Brendan Gleeson, Denis Ménochet and Charlotte Rampling. Every single one of them is totally wasted on a screenplay that has no time for such niceties as characterisation, indeed in the case of the people Cal is imprisoned with at the facility it actively avoids giving them any life, rendering the third act totally inert. Outside the action scenes, Fassbender couldn't seem any less engaged, but he qualifies as one of the film's harder workers, Rampling and Cotillard often seem slightly perturbed to have been woken for their scenes. It's a particular shame to see Ariane Labed, one of the most interesting young actors in European cinema, given so little to play. She has a few lines (all in Spanish), but mostly just has to look stern. She does it well enough, but I wanted so much more for her in her first big budget film.

I could forgive many of the film's sins if the action were better. To be fair, Fassbender and Labed (who plays a female assassin working alongside Aguilar) each get a couple of extended moments to show that they did at least some of their own action. The rest, however, seems heavily doubled, is largely shot with shakycam and often cut to ribbons. It's just not very involving, because you can seldom see a single action all the way through. It's also hamstrung by the 12A certificate, which means that a climactic slashed throat can hardly be seen to bleed. Adam Arkapaw's cinematography, accomplished as it is, also creates problems for the action. Arkapaw and director Justin Kurzel's frames are, in the 1492 set action scenes, so dusty and misty that it's often tough to see much of what's going on, even before the camera motion and editing become an issue.

To be fair to the screenplay, it has a beginning and a middle. Unfortunately what it lacks is an end. After about 110 minutes the film appears to decide that it, just as we have, has had enough of this crap and it stops. To say that it ends wouldn't be true, that would suggest that there was some sort of climax or resolution. It stops, as abruptly as if the projector had broken, inviting a sequel we'll almost certainly never see. 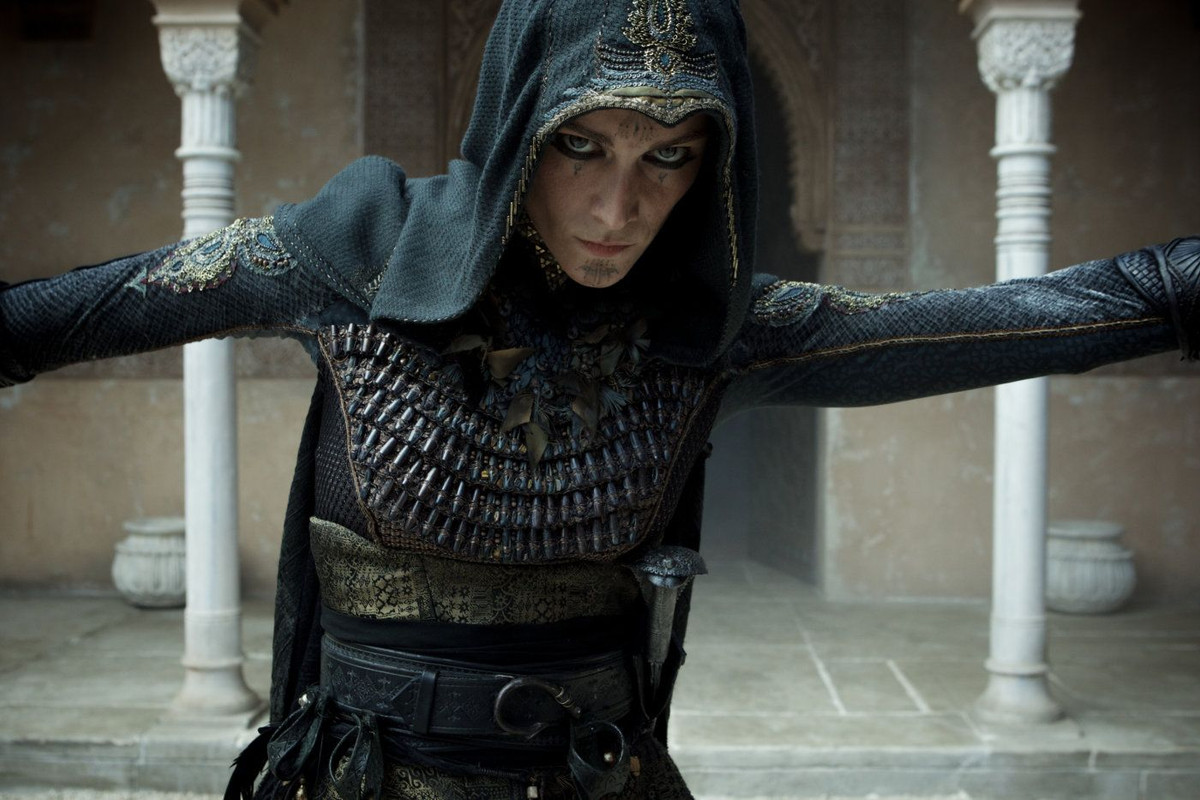 However, I've saved the film's biggest problem, its figurative raised middle finger to the audience, for last. It's one line of dialogue. Introducing Cal to the Animus, Sofia tells him that while he's experiencing Aguilar's memories "you can't change anything". This is a calamitously stupid idea. It means that for a full third of the running time we're watching a foregone conclusion. Yes, we keep cutting back to Cal, going through the actions we see Aguilar doing, but because his actions have no bearing on the action scene, what it amounts to is watching a man get overly animated in his involvement with a video game cut scene. The other problem with cutting frequently back to Cal is that it seems to happen every time the action threatens to develop some sense of flow. Another great decision there.

When the action scenes finally move to the present day, with Cal actually doing something, it is no more involving, because the people fighting alongside him are total non-entities. Michael K. Williams has said a few lines, but the rest are just bodies, occasionally glimpsed in the background. The stakes are non-existent, the plan they're trying to stop is so vague despite having been discussed endlessly, and the final action scene is a total anti-climax. It doesn't even manage to have the coolest moves in the film (those belong to Ariane Labed in one of the 1492 sequences).

I said that I could see an easy way to fix Assassin's Creed, at least to some degree. It's this: set the whole film in 1492. Immediately the action is more involving, you lose the impenetrable technobabble and reduce the film down to a focused conflict between good (Assassins) and bad (Templars). This would also mean there would be more space to develop the relationships, especially between Aguilar and Labed's Maria, adding weight to the action scenes. I don't know if that would make the film more or less faithful to the games, but I do know it would make it a better film. It might even mean it could have an ending.

Justin Kurzel began his career with the brilliant true crime tale Snowtown. A film that gave us  3 dimensional, portraits of a range of often terrifying characters, a film that told a complete and horribly compelling story, a film that stuck with you. I'm not sure what he and his cast saw in this material, but he certainly doesn't deliver on whatever promise he felt there was here. The film doesn't look bad, but it's not got any imagery that will stick in my mind either. I hope this is just a blip for Kurzel and Arkapaw, who are much more talented than this dreadful, boring and very, very stupid film suggests.
½★
Posted by Sam Inglis at 19:18