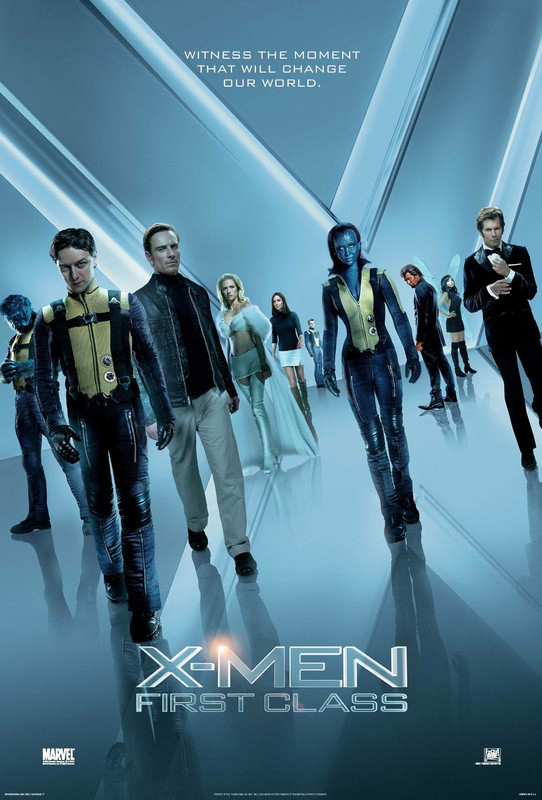 British director Matthew Vaughn was originally due to helm the third X-Men film (and vestiges of his work are still to be seen in that flawed movie, notably the botched casting of Vinnie Jones as Juggernaut). It is definitely to the benefit of the franchise that he ended up doing this film instead, having amassed more experience with both special effects (on Stardust) and superheroes (on the brilliant Kick Ass) in the interim. He brings all this to the table, along with a now long-running and fruitful collaboration with screenwriter Jane Goldman.

First Class takes a little while to get going. The first half hour is largely exposition and often feels like several different movies (Charles Xavier in Revenge of the Nerds vs Magneto: Nazi Hunter) trying to play out all at once. It's not very cohesive, and the stuff that works best - the Magneto section - needs more room to breathe; its own movie perhaps. There are also some botched moments in the first act, most notable is a scene reintroducing Kevin Bacon as the film's evil bastard in chief (though he's never called it in the movie I believe the comic called his character Mr Sinister, which is a name made for Kevin Bacon). It's not that it's a terrible scene, more that it seems like an excuse to get the lovely Rose Byrne to run around in her pants for five minutes for no real reason, which, frankly, is beneath both her talent and her dignity.

The movie makes the shift out of first gear stick once it brings the main characters together, and that's largely because Vaughn has called on two of the best British actors of their generation, James McAvoy and Michael Fassbender, to play Xavier and Magneto. The  push and pull of friendship and rivalry between these characters has always been central to the X-Men films, and here we get to see the inception of this complex and ever-evolving relationship. McAvoy and Fassbender each avoid impersonating the actors who have previously played their characters, but manage to give their portrayals enough of a flavour of, respectively, Patrick Stewart and Ian McKellen, that we can see how they grew into those people. Beyond that though, these are two great performances that complement each other, showing Xavier and Magneto as two sides of the same coin. However, it is Fassbender who runs away with the film, from the early scenes as he hunts Kevin Bacon's Sebastian Shaw and other Nazis across the world to the final moments of the film, in which he truly becomes Magneto, Fassbender brings serious dramatic weight to everything – no easy feat in the midst of a gigantic action set piece playing off the Cuban missile crisis. Even in the film's lighter moments, Fassbender's force and intensity leap off the screen, as good as he was in Fish Tank and Hunger, this may in fact be his best work to date.

The other major characters are Bacon's Sebastian Shaw, which is a welcome return for a great and underrated actor, and Jennifer Lawrence as Mystique, perhaps a surprising follow up to Winter's Bone, and a good training ground for her own franchise launcher The Hunger Games. Bacon is clearly having an absolute ball as the energy absorbing Shaw; he's slimy and evil, and while he may seem a weak physical threat the character's sheer ruthlessness makes him a threatening villain, and the scenes he shares with Fassbender are some of the film's most compelling; two fine actors going at each other in scenes that deal with big themes and real moral complexities. Lawrence is also good here, and the progression of her character from one who constantly uses her powers to look normal to become the character we know from the first three is well written and affectingly played by Lawrence, especially in a scene with McAvoy when she first appears, naked, in full Mystique look, in front of Xavier.

The problem that has always dogged the X-Men franchise is an overabundance of characters, and that's also felt in this film. Outside of Xavier, Magneto, Shaw and Mystique there is little real character development (Shaw's cronies are the most affected by this; January Jones' credit may as well be for her cleavage and the rest of the bad guys – including Vaughn's lucky charm Jason Flemyng as Azazel – get about four lines between them), the others are really just special effects waiting to happen, which is a shame because the young actors playing them (especially Nicholas Hoult as Beast) are all pretty good.

The outstanding part of the film is its action heavy climax. By the third act, most superhero films abandon whatever themes they've been working through for the past hour and a half for twenty minutes of characters fighting. Not this one. For much of the film, the political content is like being smacked in the face with contemporary resonance. The use of the Cuban missile crisis is clever and thrilling, but that's not why it works. The last twenty minutes or so is where Vaughn and Goldman draw all the threads, all the themes, together into an almost operatic crescendo of thrills, effects and interpersonal drama. The balancing act achieved here by Vaughn, the writers and editors Lee Smith and Eddie Hamilton is outstanding. Fassbender and McAvoy both seem to raise their performances one more notch too.

X-Men: First Class has a few issues, but overall this is great blockbuster cinema. It mixes action, drama and a few laughs capably, it is character driven, powered by excellent performances, but never forgets to deliver thrills or great action choreography (thanks Azazel), it's also a thematically developed and interesting film, which will make it interesting to revisit in the future. Whatever its minor problems, this is another fine addition to the filmography of Matthew Vaughn, who is becoming one of Britain's most interesting directors (and, almost uniquely, doing so in the mainstream) and it is likely to be one of the best mainstream films you see this year.
★★★★☆
Posted by Sam Inglis at 10:54