Sam Bell (Rockwell) is coming to the end of a three-year contract as the one person tending to a mining operation on the moon, and he’s looking forward to going home to his wife and young daughter. After one of the mining machines breaks down Sam goes out to repair it, and crashes his vehicle. He is woken in the medical bay by Gerty (Spacey), the computer that looks after him and assists him. Later Sam goes to investigate the crash, returning with the unconscious body of a man who appears to be Sam Bell.

The first feature by commercial director Jones, Moon is real throwback. In the last twenty years sci-fi has come, largely, to be a genre dominated by spectacle, with special effects often substituting for such small considerations as plot, dialogue and character. Moon chucks much of that out, creating an insular and believable world, using special effects only to place us in that world and to tell the story, and taking the form of an intense character study rather than a wham-bam action movie. In order for this to work, particularly given that for most of the running time he is the only person on screen, you have to have a great actor in your leading role, and Jones certainly has that in Sam Rockwell.

Rockwell is one of those actors that casual moviegoers might recognize as ‘that guy from that thing’, but he’s never, despite sterling work on screen over more than a decade now, had a real breakout role. That’s a real shame, because he’s one of the most consistently interesting actors in America right now. The role of Sam Bell was written expressly for Rockwell, and he is quite brilliant in it. He totally inhabits the guy, making him entirely engaging, which makes the film’s first 20 minutes, in which all there is to see is Sam going about his day by day routine on the base, some of its most absorbing. It’s when, a bit later, Rockwell is playing two Sam Bells that you really get to see how good he is. The two characters are totally different - he even holds himself differently - but they are also, remarkably, recognisably the same person. That’s a tough line to walk, and Rockwell walks it with skill and confidence in every scene. Kevin Spacey is also good value, vacillating between dry humour and menace in his characterful performance as onboard computer Gerty. It may be the best work he’s done in some years.

What works less well is the screenplay. After an intriguing setup the central mystery is solved rather too quickly, and the answer revealed to be the most obvious answer possible. Thereafter, though it thankfully doesn’t become a totally different film, as Danny Boyle’s otherwise excellent Sunshine did for its last half hour, Moon descends into plodding predictability which saw me ticking off sequences and plot points one after another. It’s a real shame, because for the first 45 minutes or so it seems that Moon might, potentially, be a classic.

You can’t take anything away from Duncan Jones though. Made for an astonishingly paltry £5 million, Moon looks fantastic. The special effects are easily on a par with films made for 20 times this budget, and add greatly to the atmosphere of the movie while the set design, though extremely reminiscent of Alien among others, has a sort of chilling clinical beauty to it that really works for the film. Despite budgetary and location limitations Jones makes Moon a film with a visual identity very much its own, even when the story begins to plod the film always sucks you in with its visuals. It bodes very well for Jones’ future.

Though this is far from the perfect slice of sci-fi that many reviews have pegged it as, it is an interesting film, a film with ideas. It’s also a film with an exceptional central performance, from an actor who hasn’t really got his dues, and it’s a fine calling card for a man who looks set to become an interesting filmmaker. All of these are good enough reasons to recommend, despite reservations, that you take a trip to the Moon. 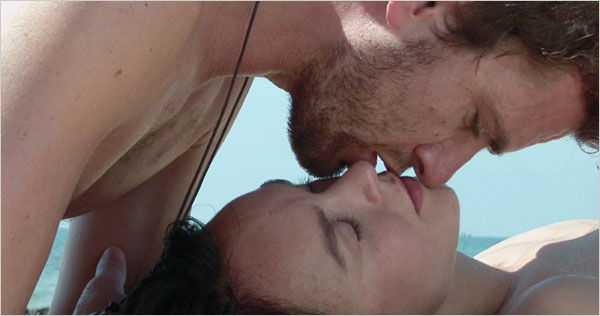 Danish director Ole Bornedal’s latest is perhaps best summed up by this extract from his director’s statement. “I have attempted to create an unrestrained piece of modern drama, which - while seriously derailing - is still recognisable to us in the inner chambers of our souls.” Imagine a film noir - one, frankly, with a very unsatisfying mystery - written and directed with all the crashing pretentiousness that that statement implies and you’ve a pretty good idea what watching this film is like. The basic story sees family man Jonas (Berthelsen) find himself involved with a woman whose car crash he witnesses when he goes to the hospital to see that she’s okay, and goes along when her family assume that he’s her old boyfriend. When Julia (Hemse) wakes, blind and with amnesia, Jonas continues to say that he is the mysterious Sebastian (Lie Kaas).

On the face of it Just Another Love Story is brilliantly made. It often looks stunning, with slick and sometimes surprising visuals in which Bornedal shows off a style very much his own. The performances are also excellent, with the whole cast contributing fine low-key work, which runs counter to the film’s often overblown tone. The problem isn’t so much the constituent parts of the film as it is the way it is put together. Bornedal seems to have this need to show you everything, so rather than just let a character talk about his fantasies he has to show them to you in badly rendered and purposeless cutaways. Rather than just letting a character disappear for a scare he shows them going. Rather than just letting you realise the plot has come full circle he replays almost the entire opening scene. Rather than let you fill in the hinted at detail of a key relationship he shows flashbacks. It begins, at a certain point, to feel like Ole Bornedal thinks you are too stupid to understand his film without signposts.

It’s a relentlessly over the top film; the plot, even for noir, seems outlandish. Bornedal’s penchant for extremely literal visuals and over the top dialogue, which seldom sounds like anything real people say, makes for an odd mix even before you add in the performances. I can’t fault Anders W Berthelsen, Rebecka Hemse, Nikolaj Lie Kaas or Charlotte Fich (who plays Jonas’ wife), they each give a fiercely committed, down to earth and dramatically satisfying performance, and Berthelsen and Fich create a truly rare convincing on screen marriage, but their acting seems teleported in from another film.

I have no clue what Ole Bornedal is trying to do here. Just Another Love Story is great to look at, but as a whole it’s a confused and often irritating mess. I arrived at every plot twist long before the film did and was just bored for much of its running time.
Posted by Sam Inglis at 14:57