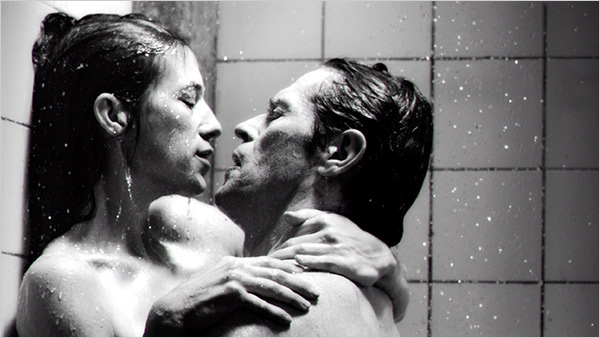 Antichrist is an extraordinary film; I have no idea if I liked it.

The story has been very well reported in the press, but for the record: A couple, known only as He (Dafoe) and She (Gainsbourg) lose their two year old son Nic when he falls out of a window while they make love in another room. She goes into a deep depression following the loss, and begins to suffer anxiety attacks. He, a therapist, decides that her doctors are overmedicating her and as therapy he takes her to place that scares her most - their cabin in the woods, known as Eden. There things go from bad to worse as she begins to slip further from reality.

Where do you begin with a film like Antichrist? So much has been said and written about it in the few short weeks since its controversial Cannes bow that what was (and is) a Danish art film about grief and pain has become much more - the most discussed release of the week, if not the year. People have called for it to be cut and banned, and even discussed whether its uncut release renders censorship pointless. In all of this hysteria the film itself has become curiously lost. So let’s bring it back to the film, and start by saying this: Antichrist is not the film you’ve read about in the tabloids. Its violence is nasty and personal and disturbing, but it is also very brief, essential to the film, and no more graphic than any 18 rated violence.

With that said; if that’s what Antichrist isn’t, what is it? The first word that comes to mind is beautiful. That might sound odd given what’s been reported about it. It was once said that film is truth 24 times a second, that’s patently rubbish, but Antichrist is art 24 times a second. Almost every shot of this visually stunning film could hang quite justifiably on the walls of any art gallery. In collaboration with his DP Anthony Dod Mantle, Lars Von Trier has created one of the most ravishing looking films of the 21st century to date. Here’s a promise: the Oscars will get at least one thing wrong in 2010, because Antichrist won’t even be nominated for Best Cinematography. The first five minutes are absolutely astounding. In gorgeously crisp monochrome Von Trier captures He and She making love in super slow motion as their young son climbs on a chair and falls out of a window to his death. Every shot is so well chosen, creating a mounting sense of both eroticism and dread as the sex moves closer to climax and the child moves closer to doom. Von Trier also uses this prologue to introduce both his themes and his chapter titles, lingering on three toy soldiers who are named Grief, Pain and Despair.

If you’re expecting an out and out horror film then for about 80 minutes in the middle of Antichrist you are going to be puzzled. For the most part that’s just not what the film is, rather it is a meditation on those three chapter headings. Von Trier says (and one should always take anything that comes after those three words with a liberal pinch of salt) that he wrote this film in the midst of a deep depression. Whether or not that’s true Antichrist certainly contains the most visceral, and perhaps the most realistic, portrayal of clinical depression that I’ve seen. It’s here - especially in the chapter of the film titled Grief - that Charlotte Gainsbourg’s performance which, to widespread surprise, won her the Best Actress prize at Cannes, really shows itself as the extraordinary piece of work that it is. She’s incredibly convincing as this woman who seems completely hollowed out by grief and remorse over her son’s death. She throws herself into the part body and soul. The panic attacks are truly terrifying (and, having suffered from them myself, I can tell you they are also completely realistic), as is the way she inflicts pain on herself, turning to both sex and violence - smashing her own head into the toilet bowl for instance - in order to feel something, anything, else. It is astounding work, completely committed, and disturbing and thrilling to watch in almost equal measure.

Great as Gainsbourg is, and as much as this is her film, let that take nothing away from Willem Dafoe. His is the less showy role; the voice of reason and latterly, intriguingly in a film often accused of misogyny, the victim, but Dafoe too gives an extremely committed and absolutely real performance. His character is perhaps underwritten, but Dafoe is such a consummate actor that he’s able to suggest layers, like his own simmering grief about the loss of the child, that were almost certainly not there on the page. It’s a generous performance, ceding the spotlight to his co-star, but in its grounded realism it also allows Gainsbourg to go as far off the deep end as she can, without shattering the film’s odd credibility.

Some people, notably mostly people who haven’t actually seen it, have dismissed Antichrist as a meaningless collection of horrors. Others have attempted to ascribe all sorts of meaning. There are religious interpretations, psychological interpretations, psychosexual interpretations, political interpretations, there’s the idea that it’s all an elaborate practical joke by Von Trier. All of these ideas are valid, except for the idea that it has no meaning at all, but for me Antichrist is perhaps best defined by something another filmmaker said about his film. Confronted with the charge that Martyrs was simply ‘torture porn’ Pascal Laugier said that it isn’t a film about torture “It’s a film about pain”. That, to me, seems to be what Antichrist is most definitely about. It’s about the pain of guilt, loss, regret, fear and anxiety, and of course it is about physical pain. For much of its running time Antichrist feels like a scream, be that a scream of sexual ecstasy, the scream of a child, a scream of loss, a scream of terror or a scream of pain. It’s a film concerned with the primal nature of people, and pain is the way it expresses that.

In a film about pain violence is always going to have a part to play, and certainly that’s true of Antichrist. The visuals, for the most part, aren’t all that graphic (and in one case they aren’t very convincing, though whether that’s deliberate is anybody’s guess). Several of the key moments of violence occur just off screen, and are thus more felt than they are seen, as in a moment that will have every man in the audience crossing their legs. The most infamous shot in the film is that of Gainsbourg’s character giving herself, in very convincing close up, with a rusty pair of scissors, a clitoridectomy. It is, as you would expect, absolutely appalling and unspeakably, almost palpably, painful to watch and yet it, and the shot that immediately precedes it (a flashback to the prologue) are the key moments of the film. Far from being the sensational, exploitative shot that the film’s detractors would have it be it is the ultimate expression of the theme of the Gainsbourg character’s extreme sexual guilt. It makes absolute sense that a woman going as mad she is at this point, driven by the guilt of having been in the throes of sexual ecstasy as her son died, would mutilate her sexual organs. You can accuse Lars Von Trier of a lot of things with this movie, but that shot is meant seriously, and is essential to the effect of the film.

You can see Von Trier’s mischievous sense of humour at work in this film though. The chapter in which the violence kicks off is subtitled (after a thesis that Gainsbourg’s character has been working on) Gynocide. Then there’s the fox. The fox got some laughs at the screening I was at (and, yes, that’s a perfectly reasonable way to respond to a shot of a disembowelled fox saying “Chaos reigns”) but to me it was less a joke and more Von Trier saying, ‘okay, you’ve made it this far, but from here on all bets are off’. All bets are very definitely off after that, as the film’s tone becomes ever more hysterical, rising to a fever pitch crescendo with THAT shot. At times Antichrist plays like the last cinematic gasp of a man completely losing his marbles, to the point at which, though I think it’s a brilliant film, I can’t honestly tell you if Von Trier is a genius or a lunatic (the truth, perhaps, lies somewhere in the middle).

Yet for all its madness, all the completely overblown content of its last 20 minutes, this is a deeply serious and deeply thoughtful film. The imagery is rich with metaphor, for instance the poster image of Dafoe and Gainsbourg having sex among the roots of a tree, under which lie myriad naked bodies, is this nature pulling them into hell? Is it a reference to the tarot card of the fornicators? Is it something Lars thought would look good? Is it all of the above? These are the questions that Antichrist raises over and over. Is She mad? Is She bad? Whichever she is has she always been so? Von Trier doesn’t tip his hand, he clearly wants to provoke with this film, with its themes as much as with its sex and violence. In that respect Antichrist is an out and out triumph. It is one of the most fascinating and richest films I’ve seen for years, people will be discussing and dissecting this film long after the likes of Transformers: Revenge of the Fallen and The Proposal have been forgotten.

Can I recommend it? Well to say that I liked it wouldn't be true, I lurched out, staggered by it. On the whole it presents a similar problem to Gaspar Noe’s similarly brilliant, and similarly difficult, IRREVERSIBLE. Artistically it is a masterpiece, but I’m not sure who it’s for. It’s probably too arty for gorehounds and too violent for the arthouse crowd. It’s a film that asks a lot of an audience and promises them few rewards in return. It’s brilliant and beautiful but its also assaultive and disturbing. I’ll promise you this much: you may love Antichrist, you may hate it, but you won’t be ambivalent towards it and you certainly won’t forget it any time soon. That’s a great deal more than you can say of most movies.
Posted by Sam Inglis at 18:12