In a first for 24 FPS, we’ve got a guest writer. Oren Soffer, who you may know as Monotreme at the Joblo.com forums, is a film fan based in Haifa, Israel. We don’t always see eye to eye on movies, but I always like reading what he has to say. He’s a smart, incisive, entertaining and ridiculously informed writer and I’m really pleased that he took up my invitation to write an article for the site, hopefully it won’t be his last.

For his first article Oren has picked a subject that allows him to educate me, I haven’t seen enough of Daniel Day-Lewis’ work, so this list should give me a good jumping off point. Note: Unlike me Oren has ranked his list. Now over to Oren. Enjoy. Throughout a career spanning nearly three decades, Daniel Day-Lewis has managed to achieve something no other actor has achieved; a sort of prestige and respect that puts him in the position of exclusively picking his acting roles, which provides him with one of the most consistently high-quality filmographies of any performer of his generation. He is also my favourite actor of all time. Marlon Brando, Robert De Niro and a few others are constantly lauded for their immersion in their roles, but I truly think they pale in comparison to the type of engagement and devotion to the performance that Day-Lewis consistently shows in his acting gigs. His talent essentially makes pretty much all of his acting roles excellent, and picking 5 that stand out is harder than one might think, but here goes anyway.

Day-Lewis is known by most for his more bombastic, theatrical performances (Gangs of New York, for example), which is what makes this turn as an ex-hippie trying to shelter his daughter from the influences of the outside world so notable for its delicate subtlety. As the role as an altruistic, calm man at peace with himself and nature demands it, Day-Lewis enormously tones down his grandiose style for a performance that rewards us in its intricacies and gestures. Even as events start getting out of his hands – his daughter discovering her sexuality and wanting to get out and learn when all his life he has tried to shield her from the negative influences of society on the one hand, and a developer building a housing contract threatening his environmentally-friendly commune on the other – and Slavin begins to lash out at anyone who doesn’t share his concerns, he still retains a certain calmness about him which is just a wonder to see Day-Lewis play through, playing through the restraint and simply refusing to let go. It’s a wonderful performance in an equally good and quite overlooked gem of a film, written and directed by Day-Lewis’ wife, Rebecca Miller, daughter of lauded playwright Arthur Miller.
See also: Newland Archer in The Age of Innocence (1993), John Proctor in The Crucible (1996).

In this Merchant-Ivory classic we see Day-Lewis in a rare supporting role; A Room with a View includes one of his earliest roles and is often credited as putting the actor on the map, especially when coupled with the other film he released that year, My Beautiful Laundrette, in which he played a quite different character showcasing his extensive range. The film, based on the E.M. Forster novel, like most stories set in the period from Forster and other important authors who wrote about that time, specifically Jane Austen, is essentially about the oppression of women in 18th century England, who were torn between what society dictated and expected of them and their own unrestrictive needs and desires. The lead character Lucy Honeychurch, played by Helena Bonham Carter in her first film role, is in love with a freewheeling young Englishman she met in Florence, but is to be married to an upper-class dignitary, played by Day-Lewis. The role heavily showcases Day-Lewis’ ability to totally nail the mannerisms, behaviours and nasal, high-pitched accent characteristic of characters of his type, but what makes it truly exquisite is that although he is essentially playing the villain and the symbol of Lucy’s repression, he still plays the character in a way that invokes genuine sympathy from the audience, and makes us feel genuinely bad when Lucy turns down his eager and fretful advances.

Here is a perfect example of Day-Lewis’ total immersion in his roles. Day-Lewis plays a man involved in the real-life case of four innocent North Irish natives who were in the wrong place in the wrong time in London, and who ended up being falsely accused and coerced to confess to an IRA bombing they didn’t commit. The film is the seminal work of prolific Irish director Jim Sheridan, the only director other than Martin Scorsese who has worked with Day-Lewis more than once, which is saying a lot. Although it’s not a particularly showy or bombastic role and doesn’t demand Day-Lewis to show off too often, he still takes the role and totally runs with it, deftly portraying the mannerisms, quirks and characteristics of his character while also showing off some really impressive acting skills in a few scenes in which his character completely explodes and folds under the immense pressure bearing down on him.

At first, Conlon is just another average, troublemaking, rebellious but family-centric small-time thief from North Ireland who couldn’t care less about politics and just wants to have a good time and be slightly naughty. But after he is wrapped up in the whole conspiracy against him and his friends, he totally loses it and there are a few scenes of desperation and yelling that would put Al Pacino to shame. Although close with his mother, Conlon was always estranged from his father, and so when his father is mixed up and also falsely accused in the IRA bombing as well, the film shifts focus heavily to the relationship between Conlon and his father, which also affords us a beautiful acting rapport between Day-Lewis and his mentor, Pete Postlethwaite in the role of the titular father.
See also: Danny Flynn in The Boxer. 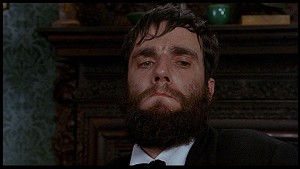 This was long considered Day-Lewis’ seminal role, and the performance that truly put him on the map as one of the greatest actors of his generation (and also won him his first much-deserved Oscar). In this true story, his first collaboration with director Jim Sheridan, out of three, Day-Lewis plays the almost insanely difficult role of a real man who was born with cerebral palsy into a poor and very large Irish family, an ailment leaving him able to control his movement only in his left foot. Able to speak only in guttural sounds, he is mistakenly believed to be retarded for the first ten years of his life but later, with the help of his devoted mother, develops into a brilliant painter, poet and author while struggling with simple daily physical tasks. Day-Lewis gained much notoriety for the extreme form of method acting he employed in order to portray the role; staying in character throughout the entire shoot, Day-Lewis the actor was himself essentially paralyzed just like his character, and had to be carried around the set just like the real-life counterpart of his character was his whole life. It is truly a remarkable performance in which Day-Lewis enters the very limited pantheon of actors who have successfully achieved the balance of portraying characters with mental or physical disabilities and excelling not only in perfectly reproducing the external and physical aspects of the disability but also in portraying their characters with true, genuine emotion.

What makes Day-Lewis’ performance that much better than other successful disability performances, such as Dustin Hoffman in Rain Man or Sean Penn in I Am Sam, is that he doesn’t sanctify his character or make him holy or pure; Day-Lewis portrays Brown as a totally realistic individual, a man who, though overall trying his best, has his flaws like anyone else. In frustration for his unfeasibly difficult physical disability, he often lashes out at those close to him, and finds it exceedingly difficult to forge a genuine closeness and connection with people due to his uncomfortable feelings about people always having to take care of him. In all, it’s a monumental, daring and truly incredible performance that showcases Day-Lewis’ ability not only to immerse himself in his performances, but also to transcend the physical requirements of his performance and deliver so much more.

It is known that any part of a movie starts in the screenplay. That includes everything from the story itself to the specifics of the character. With his latest film, the incredible There Will Be Blood, acclaimed filmmaker Paul Thomas Anderson wrote an absolute miracle of a screenplay that manages to achieve something last achieved at this level in 1941 by Orson Welles and Herman J. Mankiewicz with Citizen Kane: creating the most extensive, comprehensive, fascinating character study possible. Anderson’s masterpiece is about a whole lot of things, but at its centre is its monumental construction and de-construction of its protagonist, Daniel Plainview. Although Daniel Day-Lewis almost always plays the main character in his films, he is always one of a few main characters; this time, though, the entire film literally rests entirely on the actor’s shoulders, which applies a lot of pressure, because it essentially means that whether the movie works or not depends entirely on him.

Obviously, Day-Lewis being the remarkable talent that he is took the most fleshed out, deep, resonant, comprehensive character since Charles Foster Kane himself and forged it into one of the single greatest performances of all time. Day-Lewis plays Plainview in a way that exposes every single quirk, mannerism, nook and cranny of his character to the audience. He crafts a unique physical language for the character which he gradually deconstructs corresponding with the character’s own self-deconstruction; from the posture to his way of walking to the accent, Day-Lewis fine-tunes every little detail to perfection. Essentially, Daniel Plainview is a man who cares about one thing and one thing only: Daniel Plainview. The character himself mentions in the film to the man he is led to believe is his brother that he “just doesn’t like people.” But what is most fascinating about the role and the performance is how in the beginning, when his mind is devoted to other things, namely climbing the social and economic ladder on his way up to the top and his sheer and absolute devotion to achieving his goals and ambitions, Plainview manages to shut out his hatred for everything else around him, restraining himself and keeping about him an air of dignity and poise. But once he reaches the top, Plainview no longer has anything to distract him, and he just totally lets himself go.

Day-Lewis plays this deconstruction of the character to utmost perfection, to the point that he pulls the audience so completely into it, that by the time he totally loses it and is already completely manic and almost animalistic in his ferocity and bitterness, we totally believe it. The film’s most notorious sequence, the final scene in the bowling alley, is one that could have very easily entered the realm of caricature, but an actor of Day-Lewis’ calibre manages to find the perfect balance, and turn it into a sequence of pure, genuine, manic brilliance.
See also: Bill “The Butcher” Cutting in Gangs of New York.
Posted by Sam Inglis at 22:04