I love going to film festivals, and tend go to more than five a year (all of them in London), I can’t stretch to Cannes, but this incredible lineup of movies for the 2009 edition of the biggest and most famous fest in the world makes me wish I could. Pixar’s latest massively anticipated and, so far, orgasmically received opus. It’s another buddy movie, this time with Ed Asner’s old grouch and an irrepressible 10 year old getting lost in the wilderness. I’m sure that, like all of Pixar’s films, it will be gorgeous, but I haven’t been as big a fan of their last three films and I’m hoping Up will mark a return to the simple fun of films like The Incredibles and Toy Story. 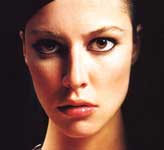 I’ve never seen any of Kounen’s films (though I have a copy of his best known; Dobermann) but this would seem a good place to start, given that it stars Mads Mikkelsen and Anna Mouglalis (pictured).

Campion’s first feature since the underwhelming In The Cut. Bright Star is a period romance between John Keats (Ben Wishaw) and Fanny Brawne (Abbie Cornish). The cast is an interesting mix of up and comers (Wishaw, Cornish, Thomas Sangster, Paul Schneider) but it also reunites Campion with Kerry Fox, with whom she made An Angel at my Table. I’ve already mentioned that I’m really looking forward to this, and the brilliant trailer (which hints at something great without making you feel like you’ve seen the film) and this announcement have only increased my anticipation for Von Trier’s return (after TV series The Kingdom) to the horror genre.

I know nothing about this film, which would seem to me the perfect way to go into something new from this auteur of the extreme (pictured). His last feature, IRREVERSIBLE, was the most difficult and disturbing thing I’ve ever seen at a cinema, I look forward to being shaken by Enter the Void.

The Taiwanese director has attracted a fantastic French cast for his latest – Mathieu Amalric, Fanny Ardant, Jeanne Moreau, Laetitia Casta, Nathalie Baye (pictured) and Jean-Pierre Leaud all appear. Again, I’ve no clue what it’s about, but I’m intrigued by the names.

In the Beginning Dir: Xavier Giannoli

After the monumentally pointless Funny Games US Michael Haneke (pictured) returns to Austria and reunites with original Funny Games star Susanne Lothar for an epic (its listed at 150 minutes) tale of ‘strange events’ ata a German school in 1913, and their parallels to the rise of fascism. Sounds tailor made for Haneke.

To is gaining a reputation outside of his native Hong Kong as a great action filmmaker, hence this English language debut. However he’s still using his regular actors (Simon Yam again stars) along with a couple of international imports in the shape of Johnny Hallyday and Sylvie Testud in this story of a French chef traveling to Hong Kong for revenge.

Park Chan-wook’s vampire movie. Really, need I say more about how exciting this sounds? Last time he came to Cannes (with Oldboy) he went away with second prize (much to the consternation of jury president Quentin Tarantino, who wanted to give Park the Palme D’Or), can he repeat or better this success with what sounds like a genre film and what sounds like a rather aritly inclined jury?

Map of the Sounds of Tokyo
Dir: Isabel Coixet

This sounds like a real departure for Coixet, who has made a name as an accomplished director of character driven dramas. It’s a thriller about a fish market employee (Rinko Kikuchi, pictured) who leads a double life as a contract killer. Add to that the fact that it co-stars the always brilliant Sergi Lopez and you’ve got a film I’m now dying to see. I hate the trailer, I hate the deliberately mis-spelled title and I hate the idea that what sounds like a simple riff on The Dirty Dozen apparently runs around 160 minutes, but the cast is exciting, and Tarantino, though he’s been off the boil of late, can write and can direct. I just hope that this is more than another grab bag of moments that Tarantino remembers as being cool in other movies.

I'll have the Midnight Movies and Out of Competition sections for you tomorrow.
Posted by Sam Inglis at 19:30