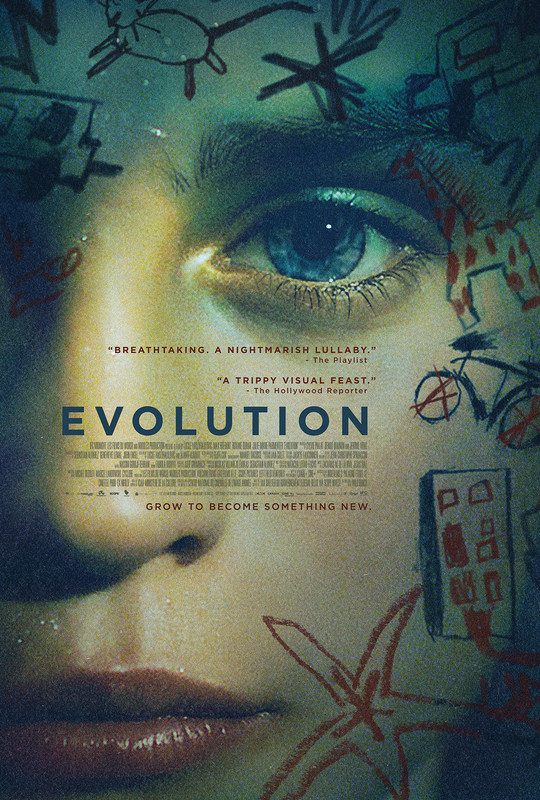 10 years ago I saw Lucile Hadzihalilovic's first film, Innocence. I loved it, and have continued to be beguiled and baffled by it in equal measure in the decade of creative silence that has passed between it and this, her long overdue second film.

Evolution is an apt title for this film in more ways than one. While she hasn't made films of her own during the gap between Innocence and this film, it describes what has happened to Hadzihalilovic's style in the intervening decade. It may also describe her second film's relationship to her first. Much of the time Evolution feels like an extension, a refinement, a development, of the themes and imagery of Innocence. It's not a requirement that you see Innocence before coming to this film, but it can only enhance your enjoyment and understanding of Evolution if you have.

The film begins with a boy, Nicolas (Max Brebant) swimming underwater. He believes that he has seen a dead boy with a starfish on his belly and runs to tell his mother (Julie-Marie Parmentier) about what he has seen and to draw a picture of it. We see that society on the island where Max lives is entirely composed of women in their mid-20s to mid-30s and boys of about 10. Soon, Nicolas and his friends are sent to the island's 'Hospital', where, in between strange procedures, Nicolas and a young nurse (Roxanne Duran) forge a connection through his drawings.

Any attempt to lay out the plot of Evolution is highly subjective, as is everything else about it. There will be as many interpretations of this film as there are viewers and they'll all be right, which means they'll also all be wrong. The fact that Evolution seems able to contain this multiplicity of meaning is one of the most seductive things about it (as it was Innocence).

A few things are clear to me. Like Innocence, this is a film about cycles and one that may end with the breaking, for at least one character, of their cycle. The film is soaked in the imagery of birth and pregnancy, both in a literal (if nightmarish) sense and at a metaphorical level. As the film opens we see Nicolas swimming underwater before emerging on to land to find his mother, or at least the woman we assume is his mother. If we take this at a level of metaphor, given the film's title, we can see it as the ultimate birth; the emergence of life from the sea on to land. This imagery of pregnancy, birth, and life emerging from water recurs throughout the whole film.  There is also a sense here of the roles of mother and child lacking permanence. Because all the children are the same age, and because of what we see in the hospital, it is very possible that what we see in the narrative space of the film is the entirety of a very brief relationship between these 'mothers' and their 'children'.

To suggest that Evolution fits neatly into a generic box that will make it a simple sell would be untrue, but it does have genre trappings around its experimental heart. For me, this is a horror film, more specifically a body horror film, and perhaps one of the most potent entries in the subgenre for some time. While I am certain that there are many other artists and filmmakers that Hadzihalilovic is drawing on here, the influences that Evolution seems steeped in are those of David Cronenberg and Guillermo Del Toro. Cronenbergian imagery recurs throughout the gorgeous body horror nightmares that are the hospital scenes, culminating in an image ripped straight out of Shivers (if it had a higher budget). Del Toro's influence is perhaps more specific and can be seen in the recurrence of things - mutated foetuses, the boys themselves - submerged partly or wholly in jars of liquid. Another specific influence seems to be Andrezj Zulawski's unlikely video nasty Possession, both in the design and in one particular scene that allows the film's often present sense of under the surface sexuality to boil over.

This submerged – repressed isn't quite accurate – sexuality is also felt in Nicolas' relationship with the nurse, whose name, we discover late on, is Stella. His clear crush on her (evidenced by the picture he draws of her in his notebook) is another thing that sets him apart from the rest of the boys, who seem not to have developed to this level yet. Initially this attraction and Stella's reaction to it remain an undercurrent, but it comes to a point of catharsis in one of the film's most beautiful and memorable images as Nicolas and Stella float underwater locked in a long, but chaste, kiss as she breathes air into his lungs. It's important that Stella also seems like an outlier in this obviously regimented society, perhaps even a rebel at some level, it's this that seems to draw her to Nicolas; first her sympathy, then perhaps more. 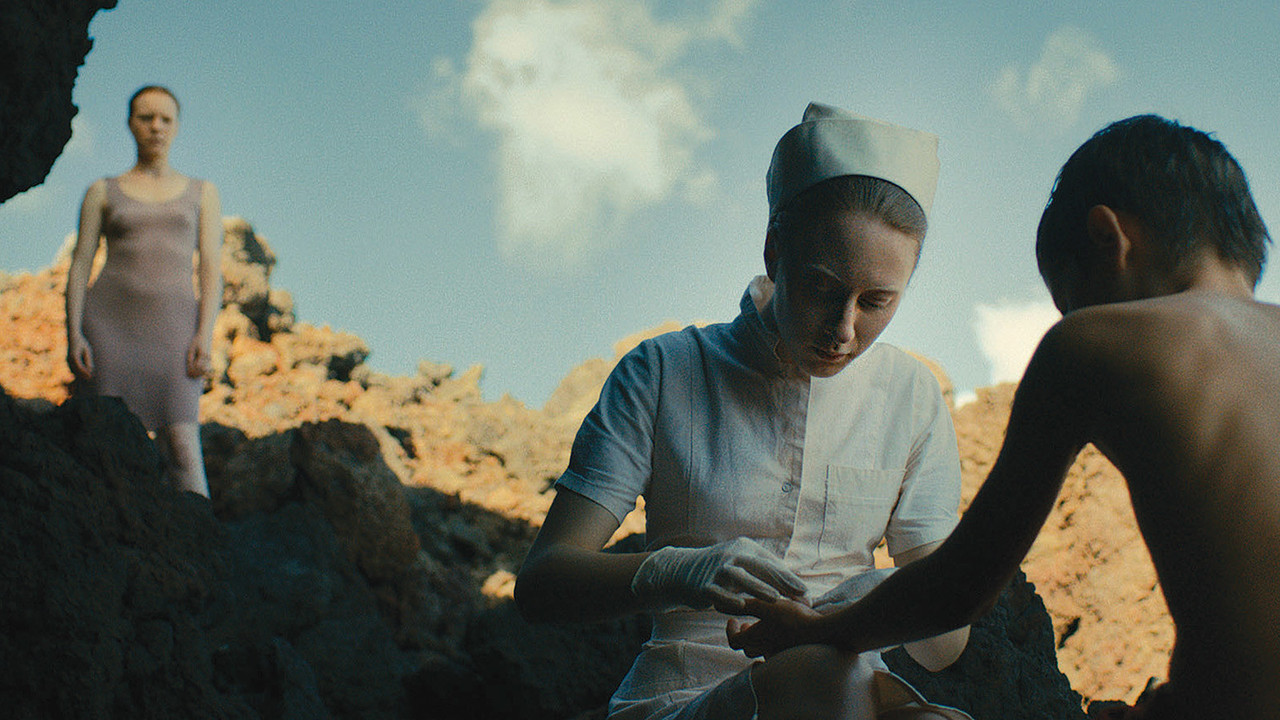 Hadzihalilovic's imagery is astoundingly beautiful throughout, be it the stark, featureless, interiors of the houses on the island, the dark and intimidating hospital or the almost alien beauty of the underwater images. Another thing that Evolution shares with Innocence is the sense that it is set in a world adjacent to ours, one that operates on different rules, socially, even biologically. Both films suggest that for the most part this adjacent place is hermetically sealed, but that it may be possible to reach our world from it. This is something that comes through strongly in the visuals, which are familiar yet strange. For instance, an early image of Nicolas swimming is filmed from below, making the water's colour and texture appear alien. The unsettling beauty of the images is also carried through in the sound design, which retains the running theme of water, with a rumbling and menacing presence throughout the film.

The cast here are required more as props to propel the imagery forward than they are strictly as actors, but the three leads all do fine work. Max Brebant and Julie-Marie Parmentier put across a deeply unusual mother/son relationship that is detached in its emotion and underplayed without being stilted. Roxanne Duran is someone I've had my eye on for a while. She has lent ethereal presence to small parts in the likes of LFF entries 17 Girls and The Monk, as well as Melanie Laurent's Breathe and has always been someone I have wanted to see in a lead thanks to her intriguingly offbeat charisma. Duran is perfectly cast as Stella, her strange beauty and otherworldly presence play into the level of reality that the film is working on. In the role, she effortlessly projects something, perhaps a level of purity, that immediately seems to set her apart from the other nurses. It's a difficult role to sum up and a difficult performance to review in any traditional sense, but Duran has that thing it is impossible to fake, the ability to draw both a camera and an audience to her, and here that's central to the spell that her character and the film cast.

There is still so much to say about Evolution and there will be more to say later, because I don't doubt that second and subsequent viewings will deepen, perhaps utterly change, what I think it's about on either a scene to scene or an overarching basis. I can say with confidence that it's quite unlike anything else I've seen at LFF this year and that it is really rather extraordinary. If you can get to see this on a cinema screen then do so. You may love it, you may hate it – though I won't understand why – but you will certainly be thinking about it for some time afterwards, and that's rare enough to be valuable in and of itself.
★★★★★
Posted by Sam Inglis at 11:29