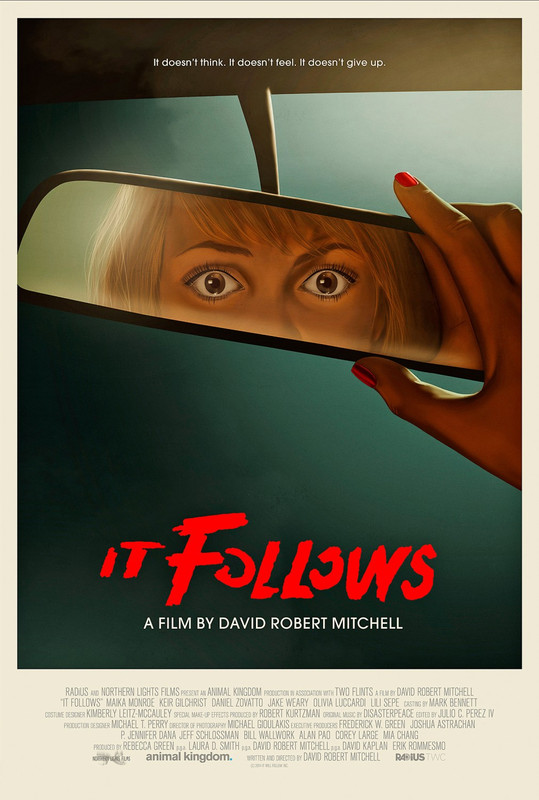 Horror cinema has long suggested that death is an STD.  Scream made the observation, the little loved Cherry Falls inverted it.  It Follows, at least to some degree, physicalises the trope and makes sex itself explicitly causal.  It's not a bad idea, and it's one of the things that has precipitated an avalanche of praise for the film.  I'm not fully on board with that praise, not because the film is bad so much as it's disappointing, both in relation to the reviews and to what it might have been.

The premise is simple enough.  Jay (Maika Monroe) has sex with her new boyfriend Hugo.  She wakes to find she's tied to a chair and he is telling that now 'It' will be chasing her.  'It' is some sort of spirit.  It moves at walking speed, It will pursue you after you have sex with someone It has been pursuing and if you have sex with someone else It will follow them until It can touch and kill them, at which point, you're next again.  When Jay begins to see the apparition her friends, including Paul (Kier Gilchrist), the boy next door who's had a crush on her forever, rally round to help protect her.

This is an effectively primal idea, and director David Robert Mitchell can certainly stage a creepy scene (even it is often the same creepy scene).  Mitchell gets some mileage out of people slowly advancing on either Jay or her and the group, taking a long time to come up on them from the very back of frame, but I did find that same idea becoming a crutch at times, and after the second time it's not as tense any more.  Mitchell also knows how to stage a jump scare, and the fact that It can often change appearance between shots means that these scares have an extra element beyond the boo factor.  There are some extremely striking images here.  The standout is a shot of a swimming pool with blood gradually pouring into the water.  It's a great image, though it owes more than a tip of the hat to Let The Right One In.

The film is well crafted in a lot of ways.  Maika Monroe builds on her strong final girl performance in The Guest with a much more fully evolved character here.  Jay is likeable and thoughtful, moral too.  Her struggle with whether to have sex with someone, protecting herself but potentially killing them, is a much more thought through character beat than many horror films stop to have.  Her relationship with Paul is also quite well done, thanks to a believable dynamic between her and Kier Gilchrist.

The problem, for me, lies not with the people but with the monster.  We don't always need to know a lot about a monster in a horror film - indeed overexplaining the monster has been the death knell of many a remake - but I find it's more interesting if, at the very least, we have an idea of what drives the monster.  For instance, Freddy Krueger wants, initially, to murder the children of the people who killed him; Final Destination's force of death is making sure that fate is set right; Leatherface and family are hungry and countless ghosts and slashers want revenge of one stripe or another.

What drives the ghost or the force that follows Jay?  The film never says.  There are interesting avenues to go down if you consider It's motivation.  For instance, all of the film's sexual couplings are hetero.  Does this suggest something about It?  All of them are outside of marriage, again, is this what It is reacting against?  Where does It come from, what do the various forms It takes connote?  This last question is perhaps glancingly addressed, but so briefly and in a way that has so few ties to anything else in the film that it ends up saying nothing.

I'm guessing the idea of simply making It a pursuing force, giving it no rhyme or reason beyond the sexual nature of its transmission, is supposed to make the film scarier.  This can work, but for me that pitiless nature is much more interesting and frightening when tied to something human, as in Henry: Portrait of a Serial Killer.  Here I'm afraid I just found it rather empty.

It Follows is a film I want to like more.  There is such potential here, potential for a discussion of the meaning of horror and specifically what it says about sex.  This is clearly not just another film out to punish a young woman's sexual impulse, it has more ideas than that, but for me it simply doesn't communicate those ideas clearly enough.  Yes there are strong moments (the beach scene is freaky) and Maika Monroe is talented, has great presence and should go on to an interesting career, but I struggle to see where all the glowing praise for It Follows has come from.  For me it's not a great film but a great disappointment, notable for its unfulfilled ambition rather than what it does achieve.
★★★
Posted by Sam Inglis at 18:43