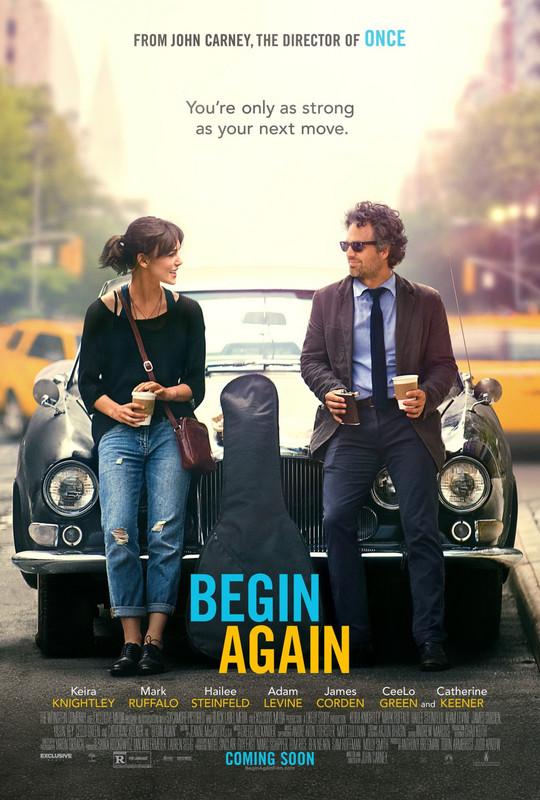 I got a headstart on Once, writer/director John Carney's charming breakthrough film about a guy and a girl finding each other (briefly) through music.  I saw the film at the Raindance film festival, at what we were told was the very first screening anywhere and I proceeded to tell all my friends about it, hoping that it would, at some point, sneak a small release.  Happily, Once became much bigger than that, and its success has now allowed Carney to make this much larger scale follow up, dealing in many of the same themes.

Begin Again (whose awful title, changed from the much more evocative Can A Song Save Your Life?, is another indication of Hollywood's current trend for taking interesting working titles and making them bland for release) opens with down and out former record company exec Dan (Mark Ruffalo) seeing Gretta (Keira Knightley), who has just broken up with her successful singer/songwriter boyfriend Dave (Adam Levine), play one of her songs at an open mic night.  Taken by her song, Dan offers to make an album with Gretta, which will be recorded live, outside on the streets of New York.

The great thing about Once, for me, was not just how wonderful its songs were, it was the naturalism of the film; the feeling that it could have been the result of stumbling on Guy  and Girl on the street and following them around for a while.  Begin Again, for the most part, feels like the cloying, contrived, Hollywoodised movie that Once actively avoided being.  The first scene in which Dan, Gretta and her hastily assembled backing band venture on to the streets to record is a perfect example.  There are some kids playing basketball in the alley and Dan has to pay them to keep quiet.  At a certain point in the song  he needs backing vocals and - wouldn't you know it - those kids turn out to be very capable singers.  This is the kind of thing that happens in movies, not in life, and it's one of many examples of how Begin Again, despite clearly aiming to feel down to earth and realistic, can be horribly contrived.

Keira Knightley is perhaps too much a movie star, too stunningly beautiful, for her role here, but once again she defies her detractors with a strong performance.  In the musical sequences her vocals are soft and easy to listen to, but it's often in the film's quietest moments that she does her best work.  Knightley's finest moment here comes as, in a flashback scene, Dave plays her a new song and we see in her face the slowly dawning realisation that this is a love song to someone other than her and that he has cheated.  She's also effective playing off the rest of the cast, forming believable connections with Ruffalo and Hailee Steinfeld, who plays his teenage daughter.  The chemistry between Knightley and Ruffalo works at a friendly level, but when it seems that the film will take this further it does feel natural because, in another scene that is almost free from dialogue, their connection seems ready to make that jump.

It's not coincidental that many of the best moments of Begin Again are quiet, because Carney's dialogue is often horrendous.  The conversations about the power of music can sound like hipster madlibs and Ruffalo's first scene, throwing demo after rubbish demo out of his car, is abysmal all round, from the banalities he spouts to the broad generic parodies that play on the stereo.  Despite this, Ruffalo isn't bad.  His character nearly drowns in cliché, but his rumpled charm is as low key effective as ever.  Hailee Steinfeld, still looking for a role that will use her to such good advantage as True Grit, is saddled with a stock character - the teenage daughter responding to her parents' breakup by acting out - and has both a ridiculously abbreviated character arc and one of the most generic movie moments in a film full of them.  Again, she's working hard, and she's not bad as such, but the film doesn't give her much to work with. 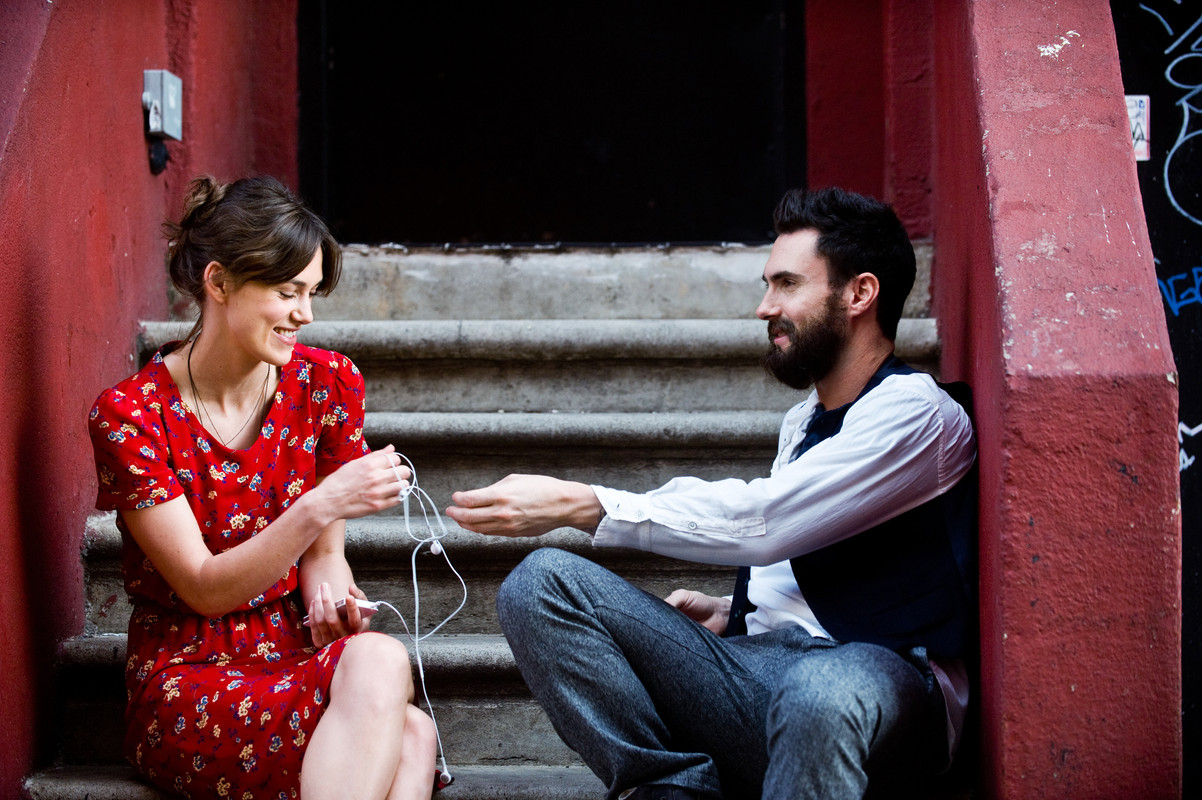 Adam Levine, of Maroon 5 fame, makes his acting debut as Dave, Gretta's longtime boyfriend, whose betrayal inspires the performance that opens the film.  Again, Levine is fine, but Dave is another thin, familiar character, defined largely by his facial hair.  The problem with casting Levine, for me, wasn't so much his acting as his singing.  I appreciate that his band is hugely successful, but that doesn't mean I understand why.  Levine sings like his balls are trapped in a slowly tightening vice.  The overall effect is perhaps preferable to white noise, but it's a close run thing.

Perhaps the biggest thing that Begin Again is missing is the idea that creating music is challenging.  Gretta says she's only an occasional songwriter, so are the songs for the album gathered from those she's written over the years or are they new?  The film never says.  For someone who doesn't do it often, Gretta seems to find songwriting incredibly easy, the only one we see her write is improvised in what seems to be minutes.  There's no sense of her process and no sense, for the most part, of what informs her songs.  You would think that the break up of a five year relationship would find its way into the record, but certainly if it does this is never a plot point.  This same ease follows into the scenes of the album being recorded, and without any sense of struggle (and Gretta's early statement that she's not especially interested in making an album, something that never really seems to change) the stakes feel low. This being that case, it's tough to invest in either the process or the outcome.

All this said, I didn't hate Begin Again.  You'd really have to be trying to hate it.  Ultimately this is an amiable film.  It has some nice moments, the music is mostly pleasant, if rather uninspired; think Radio 2 playlisted folk-pop and the performances are generally better than either the characters or the screenplay deserve.  Keira Knightley turns in another fine performance, and shows that should she wish she might just have a career in music waiting for her (I'd buy an album if the songs were better).  The problem is that it's all very middle of the road.  It's never convincing as anything but some famous people making a movie about music and it's a massive step down from Carney's last film.  He might do well to put the guitars away next time.
★★
Posted by Sam Inglis at 18:06