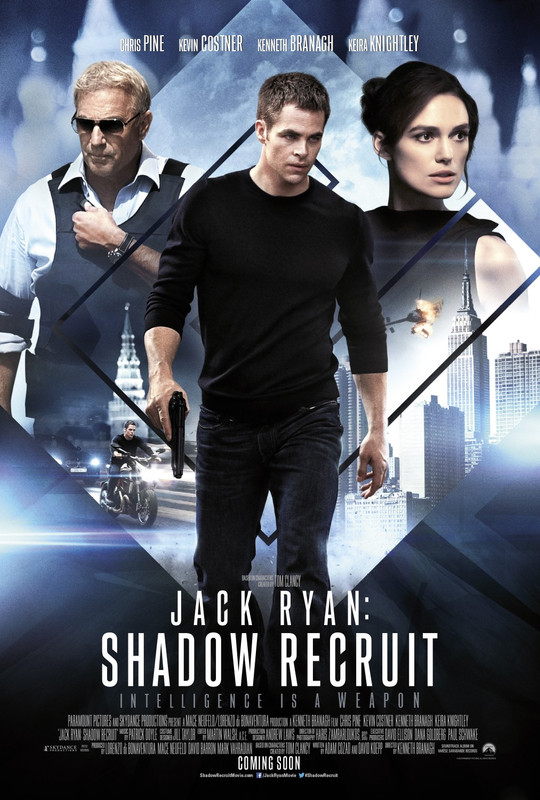 First, a confession: this is the first Jack Ryan movie I've seen, I've always meant to get around to the Harrison Ford ones, but never quite managed it.  I've also never read the books (Clancy, from what I know of him as a writer and politically, doesn't appeal to me), but I do like spy movies, I do like action movies and so I found myself sitting down for Jack Ryan: Random Words Pulled Out Of A Hat.

The plot is pretty basic: Jack Ryan (Chris Pine) is basically a superhuman; an impossibly brave and resilient soldier, a brilliant mathematical and financial mind, so he's recruited by Harper (Kevin Costner) to the CIA.  Ryan figures out (though God knows how) that Kenneth Branagh - because don't be silly, your Russian baddie can't be played by a Russian - has a plan to bring down the US economy.  Ryan is sent out on his first field mission and, inevitably, his fiancé (Keira Knightley) also ends up entangled in events.

Jack Ryan: Franchise Inviting Subtitle seems to aspire to be a more politically engaged version of the Mission:Impossible films, but it has missed both what makes those movies fun and what makes spy movies driven more by espionage than action engaging.  Before we get to either the espionage or the action though, let's talk characters.  Character development needs to be done with a little grace.  Movies should, in general, show rather than tell.  This is a lesson that writers Adam Cozad and David Koepp appear to have forgotten.  The best examples come early on.  Ryan's badassery is established with an exchange between doctors treating him after a helicopter crash "Any other survivors?"  "Two, he dragged them both out."  "With a broken back?"  Oh, yeah, that's not something it would have been better to show us, there's no way it would have been an intense and exciting opener for a movie, or demonstrated Ryan's heroism really well.  I'm so glad we only got to hear about that moment.  Knightley's character is introduced similarly poorly, as she infodumps about herself to Ryan (who is at this stage one of her patients).  It's all so bald, so dull, so colourless and this extends to all of the characters, especially Branagh's rent-a-baddie.

Worse than all this though, and bringing us to the glaring fault with the espionage side of the film, is that this is a movie in which (despite the trailer desperately trying to convince you otherwise) everyone and everything is exactly as it seems.  I can barely wrap my mind around this.  It's an espionage movie with no double crosses, no femme fatale, no questionable motives, no uncertain loyalties, no hidden agendas, and consequently, it is insanely boring.  Jack Ryan: Mundane Reboot's idea of a good espionage scene is watching a character download some data to a USB stick.  Thrilling.  The only half-decent scene to attempt suspense is one in which Ryan has to leave his fiancé Cathy alone with bad guy Cherevin.  We know exactly where it's going, but at least for these few minutes Branagh and Knightley seem to be having fun, and it's as close as Knightley comes to having a purpose in the film (even if it is still largely decorative).  If they were in a better film, with actual characters to play, this might have been a pretty good scene, as it is it's not awful.

The performances are poor all round.  There's an obvious and slightly cruel joke to be made about Chris Pine's performance, but that's beneath me. So here are the ingredients instead: Pine is a type of wood.  Chris Pine isn't a good actor.  Enjoy yourselves.  To be fair, Pine and the others are fighting an awful screenplay, but when the lead of your film seems like he's bored despite notionally having to fight for his life and having imperiled his fiancé you might wish to consider further auditions.  It seems I'm always apologising for being a Keira Knightley fan, I wish I didn't have to, I think she's a fine and interesting actress but that opinion becomes harder to defend when she appears in dross like this in a role that gives her almost nothing to do.  I realise it would be ripping off True Lies to a certain extent, but would it have hurt to get her a little more involved in either the action or the espionage?

Branagh, whose direction we'll come to, makes for an indifferent villain.  His accent isn't bad, but because we're well aware he's putting it on it still feels cartoony, which might be less of an issue if the film weren't so po-faced.  The only person to exceed the film's limitations, just as he did in Man of Steel, is Kevin Costner.  He's ideally cast as Ryan's mentor at the CIA and does as good a job as you can imagine being possible with a broad character and a lot of exposition. 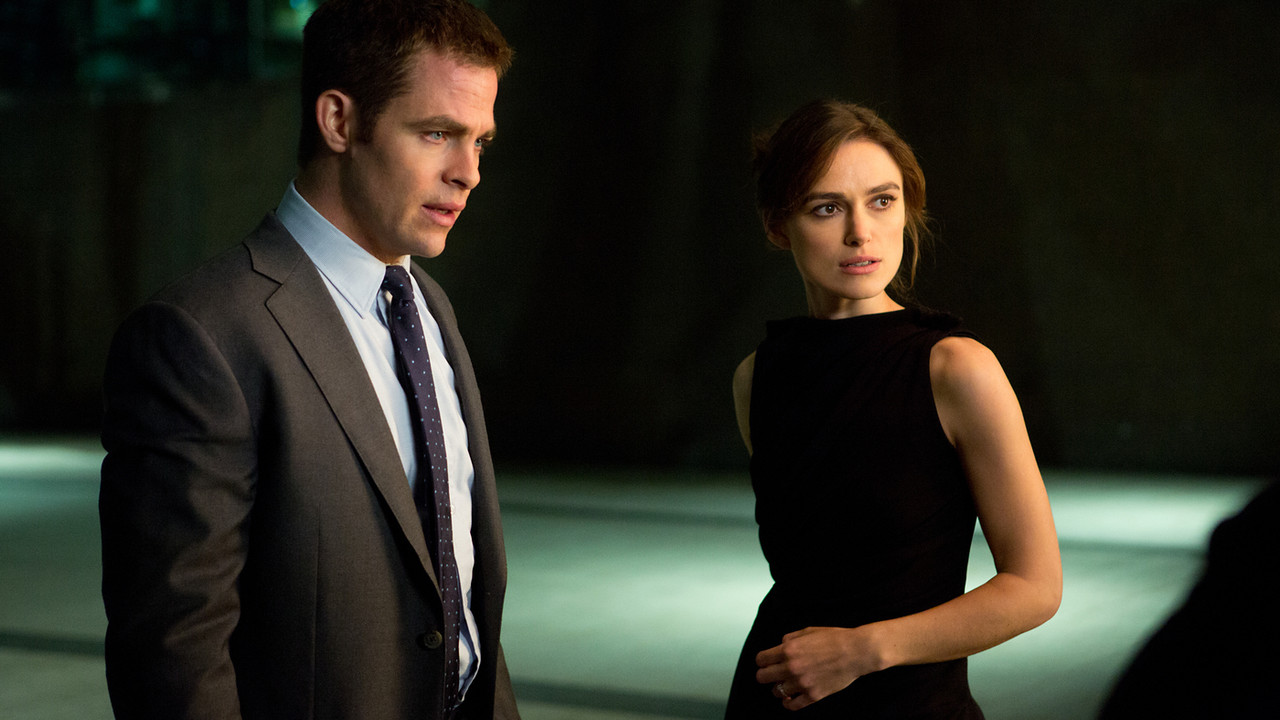 Jack Ryan: Teal and Orange looks much as you'd expect given that it's a modern action film.  To credit Branagh slightly it's not quite as boring looking as I feared from the trailer, but still, the great bulk of the film - most of what happens indoors and about half of what happens outdoors - is either teal (especially Cherevin's offices), orange (especially skin tones) or both.  I've bemoaned this trend before, but I will keep doing so until it stops.  I'm bored of having to do it, but not half as bored as I am of looking at the same two colours in every fucking frame of every fucking would be blockbuster.

Branagh's direction really falls down when it comes to the action.  It's clearly not his field and he even seems to have regressed since Thor.  In typical modern style, the action is closely shot and fast cut.  This may seem an odd juxtaposition, but I saw Buster Keaton's The General directly after Jack Ryan: Will This Do? and one thing that struck me was that even though The General is an 88 year old slapstick comedy its action was infinitely more exciting than this film's.  That's because in this film and a lot of other modern films the action feels bitty.  The cutting is supposed to instill a sense of speed and excitement and make you feel that this 12A film is more visceral than it in fact is.  This approach doesn't work half as well for me as Keaton's (or Jackie Chan's or even Indiana Jones and the Last Crusade vintage Spielberg's) approach, which pulls back much more, allowing you to get a sense of the space an action scene is taking place in and thus a sense of the flow of the action.  Here there's little flow, and without that (to say nothing of the absence of interesting characters and situations), I found it difficult to care about or be excited by any of the action beats.

Some people have made mention (usually in negative terms) of the film's politics, but frankly that's the least of its problems, if anything it's significantly less bombastically 'America, fuck yeah' than it might have been.  I can't really take any of its politics seriously because, frankly, I can't take any given frame of it particularly seriously.  Jack Ryan: Insert Subtitle Here is, sadly, a pretty good diagnosis of what's wrong with Hollywood right now: an old idea reheated without much thought and executed in a way that, for all the money and time poured into it, feels incredibly half-arsed.  It's two bad films for the price of one. Worse than that, it's two boring films for the price of one.
★☆☆☆☆
Posted by Sam Inglis at 21:47