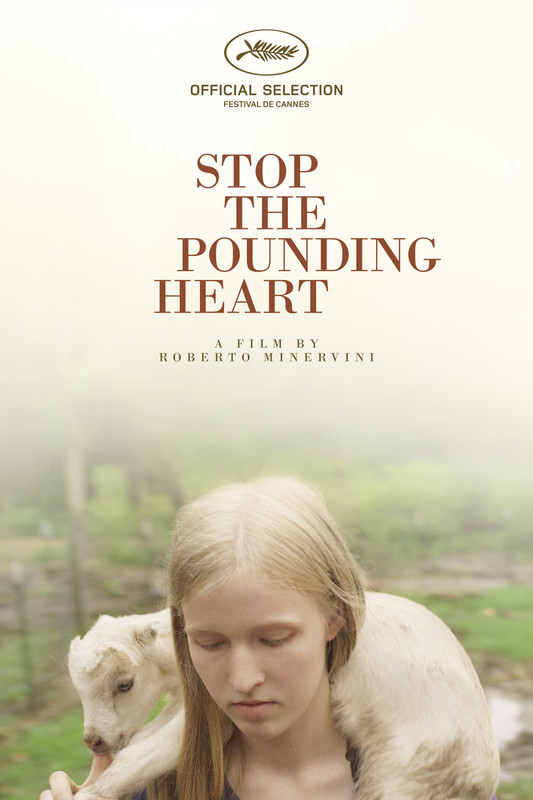 The third of a thematic trilogy by Italian director Roberto Minervini, Stop the Pounding Heart straddles a very fine line between documentary and drama while observing two rural Texan families.  The main focus falls on the extremely religious Carlson family, and on 17 year old daughter Sara.  The plot is very loose and advances only in tiny increments, but the subtle but growing connection between Sara and Colby - a boy from the neighboring family who is teaching some of Sara's younger siblings to ride bulls – provides one throughline.  The second, at first glance more prevalent, throughline comes from themes of fundamentalist religion and of Sara's implied struggles with the life she's expected to lead.

You'll notice that I've given no actors names above.  This is for the simple reason that everyone in the film plays a version of themselves and uses their real name on screen.  This seems to me one of the most difficult balances to strike, finding non-professionals capable of acting in a story that is subtly different from their lives, but still essentially playing themselves and doing so in a way that is unaffected.  In this Minervini was either incredibly fortunate or extremely skilled with his direction because only one or two of the actors ever hits a bad note and they're never on screen long enough for it to matter.  Sara Carlson and Colby Trichell are especially good.  Nothing about their relationship is explicitly stated in this film, but the hints of growing closeness are beautifully articulated and affectingly inform some of the later scenes in the Carlson home.

Fundamentalist religion is usually depicted as something scary, and to be fair there are elements of the Carlson family's beliefs that are unnerving in the modern world especially a discussion, entirely between women, about how the bible says women were created to serve men, not vice versa.  However, Minervini doesn't go out of his way to show their religion as oppressive, and often presents it in the best light.  This is clearly a family that cares deeply for each other.  The mix of the two ways that religion influences the family seems reflected in the scene in which Sara expresses (in vague terms, but terms we suspect are to some degree to do with Colby) doubts about God.  Sara's mother is caring, praying to God to protect her and 'stop her pounding heart' but it's also clear, particularly in the final scene, that even if consented to, this is something of a means of control.

As the actors straddle the line between documentary and drama so does Minervini's camera.  Scenes of the Trichell boys riding bulls, of Sara working with her father and of one of Sara's relatives (her aunt?) giving birth have a gritty documentary feel, but Minervini isn't above a little magic realism; a scene of Sara and her siblings going on a picnic has a glowing, almost idyllic, quality.  There is definite design here.  Minervini uses low light beautifully in a few shots and his eye for composition – largely centered on Sara's down to earth beauty – is impressive.  The whole film has a sort of bruised beauty, right down to its ellipsis of a final shot.

Stop the Pounding Heart is a small and subtle film, but for me it's what is best about minimalist cinema.  It may not shout about it, but under the surface it says a lot.  It expects you to do some of the work, but rewards you with beautiful images and fine performances.  Some will simply find it uneventful and dull, but I was thrown right into these people's lives and would happily have watched them for longer.
★★★★★