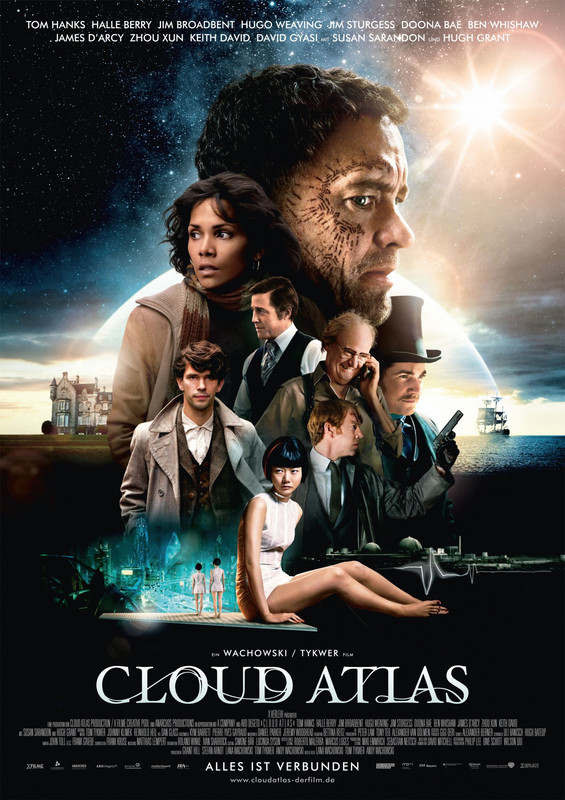 Full disclosure: I’m not a great fiction reader, so I came to Cloud Atlas knowing absolutely nothing about it, and unable to draw comparisons between book and film. Personally this is how I prefer to walk into any film; knowing as little as possible about what I’m about to see, both because it means that I am more likely to be surprised and because, in the case of an adaptation, that I am able to assess the film purely on its own terms.

You have to give Cloud Atlas this: it is jaw-droppingly ambitious. The film relates six stories, all of which connect with at least one other; some in big ways, such as sharing a character, others in smaller ways. The earliest is set in 1849, the latest in 2322. That the film is patchy, that some segments work better than others, was probably inevitable, but that it makes any sense, has even the tiniest of discernible emotional throughlines, has to go down as an achievement because the odds really are stacked against it.

The film is demandingly structured; cutting across the six stories (each of them, mercifully, told in chronological order) not so much by telling them in long acts as by making – or attempting – emotional connections between the cuts; by trying to find echoes of one story in another. This is really what the whole film is trying to do, and while it works well in some cases (say the 1936 and 1973 storylines, both directed by Tykwer, which carry a love story between Ben Wishaw and James D’Arcy’s characters across the years through Wishaw’s letters) others fall flat (the initial story of Son-Mi 451 (Korean actress Doona Bae); a ‘fabricant’ worker freed in the 2144 storyline echoes in the 2322 storyline, where she’s worshipped as a goddess, but that element never quite convinces in the same way as Son-Mi’s discovery of the world and her place in it). This is perhaps the ultimate problem with Cloud Atlas; while bits of it do connect, with each other and with me as an audience member, it never really reaches the profundity it is so obviously striving for.

In a way, Cloud Atlas is a film length version of Dustin Hoffman’s blanket theory from I Heart Huckabees: it argues that we are all one, and that everything we do is connected to everything else in the universe. Unfortunately, Cloud Atlas sometimes makes this argument in a rather cack-handed and over literal manner, largely through its casting. To graphically demonstrate the connections between the stories and the characters, the film uses a small core cast, all of whom appear in at least four of the six stories, sometimes they’re unrecognisable thanks to state of the art make up (Halle Berry in Son-Mi’s story), sometimes they’re embarrassingly obvious thanks to terrible make up and worse performances (Tom Hanks’ truly horrendous mockney gangster in the 2012 story, a turn which should require him to return at least one of his Oscars). Sometimes this makes it hard to grasp the tone. For instance, when you see Hanks as one of the grotesques he plays in the 2012 and 1849 stories are you supposed to take those scenes seriously? The nature of the story and the visuals sit uncomfortably against each other at times like these.

This isn’t to say that you can dismiss Cloud Atlas at either of these levels. Okay it’s no surprise when you see who Jim Sturgess’ wife is played by at the end of the 1849 story, but it does bring two parts of the film nicely full circle both as a love story and as a story about the abolition of slavery. Everyone will have their own favourites and lest favourites among the stories. Personally I wished that the story count could have been cut to five, because while all the others had moments I felt worked, the 2012 storyline was an unending embarrassment; spectacularly obvious in its storytelling, overbroad in its writing and cancerously unfunny, it made me groan every time we cut back to the hi-larious antics of Jim Broadbent and his retirement home players. For me the storyline that created the most consistent and interesting world was that of 2144. It has problems – an awkward, but absolutely not racist, as some have charged, make up job on Jim Sturgess – but Doona Bae, whose Audrey Hepburnesque innocence I fell for some years back, is perfect casting as Son-Mi 451, and really delivers a sense of an entity seeing the truth of the world for the first time. The love story could perhaps do with more room to breathe, but the film is already creaking at the seams at 172 minutes.

The rest of the film falls into a resolutely middling pattern. None of the other stories is a dead loss, but all have their problems. Berry and Hanks play well off each other in the 2322 section, though Hugh Grant is pretty laughably cast as the chief of a tribe of cannibals. Seriously, go back and read that again, I’ll wait while you stop laughing. The real problem with the 2322 section is the language. The English language seems to have settled into what some might call a degraded form by this time in the story, and this, plus Hanks’ slightly strangulated accent in this section makes it a challenge to understand everything the characters say. I get the feeling that Cloud Atlas might have been better served as a mini-series, because, for example, while the echoes of the 1936 love story are well served in the 1973 story the other strand of that story; a corporate thriller with Halle Berry’s reporter investigating possible corruption at a nuclear power plant is underexplored and anti-climactic. 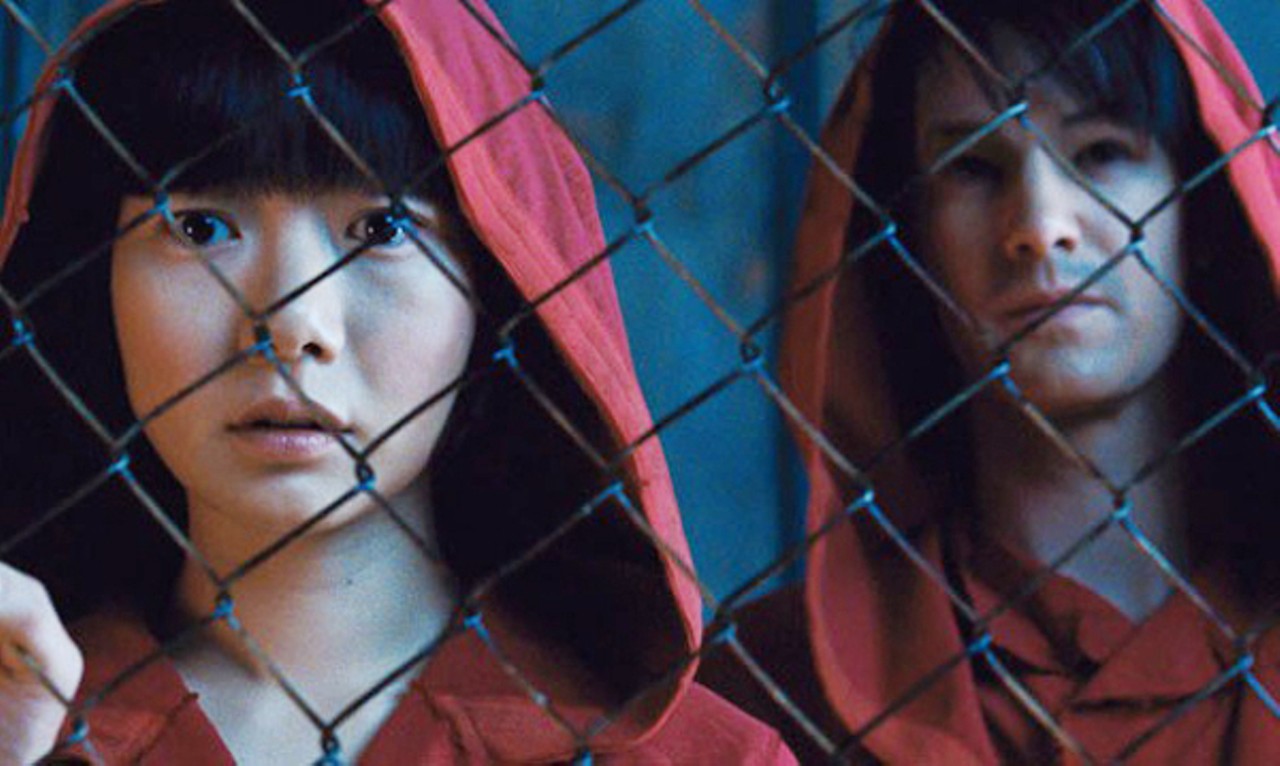 The performances are hard to talk about, because they are by their very nature so variable. Most consistent – but also most confined to a single part – is Bae. British actors Ben Wishaw and James D’Arcy make a connection that resonates in the 1936 story. Jim Sturgess, who I’ve often dismissed, also does some good work, though there is an inescapable awkwardness to one of his roles, Berry too is pretty consistently good. More consistently on the other side of the coin is Tom Hanks, who too often pantomimes through terrible make up, and has easily the most outright laughable moments. Hugo Weaving plays another selection of variations on the sort of villain roles he’s often called in for, and frankly I find him as boring here as I ever have. Worst, though, is Jim Broadbent, whose two major roles are both full of tedious doddering.

There is a lot to talk about here, and I can only really hope to hit a handful of points without making this an epic even by my standards. Ultimately I’m somewhat undecided on Cloud Atlas. At times, it bored me (the relationship between Ben Wishaw and the composer (Broadbent) he goes to write for in 1936), at times it actively irritated me (every single time we cut to 2012), and at times it really had me (anything with Son-Mi). I can see what Tykwer and the Wachowski’s are reaching for, but while they strive for profundity they never really hit it for me, largely because the film, skipping through history with abandon, and sometimes hamstrung by the technical limitations of its casting choices, sometimes struggles to find a truly consistent tone. It is, like many films that are structured in this way, frustrating in its lack of consistency, but it has enough moments that it is – just – worth the large investment of time.
★★★☆☆
Posted by Sam Inglis at 15:53