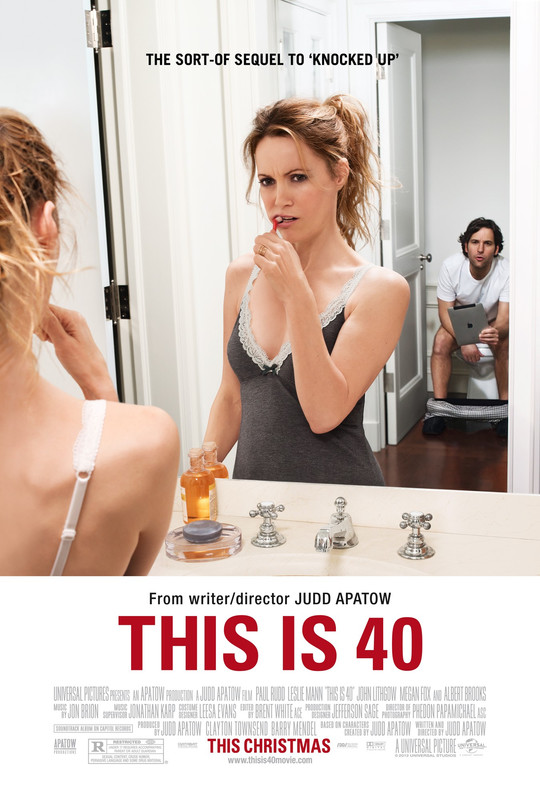 When I saw it at the cinema I quite liked Judd Apatow's first feature, The 40 Year Old Virgin. It managed to be both sweet and raunchy and, despite a clunky third act break up, present two individually likeable characters in Steve Carell and Catherine Keener, and get you to root for them as a pair. On DVD the film expanded, and became bloated and self indulgent, thanks to an added 17 minutes, pushing an already long film north of the 2 hour mark.

Eight years on, with two subsequent films resounding hits, Apatow has the sort of clout that means he doesn't have to wait for the DVD to present the indulgently overlong version of his film, and so we have this 135 minute personal opus, revisiting two of the side characters from his spectacularly overrated Knocked Up.

In This is 40 Apatow's real life wife Leslie Mann and close friend Paul Rudd play Debbie and Pete, in their 13th year of marriage, both approaching 40, and with two kids (played by Apatow and Mann's own children Maude and Iris). Supposedly a realistic look at a modern married couple, a lot of the individual incidents in This Is 40 ring true, but stitching them all together accentuates how unbelievable some scenes are, as well as how awful these characters are.

For all the little things – largely improvised arguments between the clearly talented Apatow siblings – that really do ring true, there are things here that make the films pretensions and claims to realism downright insulting, particularly the rich person's view of what it means to be in financial difficulties. Newsflash, Judd, people struggling to pay the second mortgage on the house they might soon have to sell aren't generally able to put another $12,000 on their American Express card on a whim. We hear about all the problems that two failing businesses have caused for Pete and Debbie, but the consequences seem intangible. There is discussion that an employee who has stolen $12,000 from Debbie has to pay her back, but no indication that this will ever happen, or that the Police might be involved, instead, following a scene that exists to let a cameo player improvise, the issue is forgotten.

If you can give the film a pass on these issues, there's still the matter that Pete and Debbie are just awful. Each, at some point during the film, tell the other colossal, life altering, lies. Many would see just one of these lies as grounds for divorce, but the combined weight of them only ever produces one argument, which is simperingly and all too easily resolved come the merciful release of the end credits. They're terrible in smaller ways too, particularly when it comes the way they deal with a kid who has been rude to their older daughter on Facebook and his Mother (a cameoing Melissa McCarthy, who continues to be cast as someone devoid of even a grain of the charm she had in The Nines). They get away with this the same way the film excuses all the other awful things they do and say (see the ENTIRE birthday party set piece); by dint of the fact that EVERY other adult in the film is worse than they are.

I don't mind a film having characters who are reprehensible, but I do feel like the film should view them as reprehensible. In the Company of Men gets this right; Aaron Eckhart's Chad is a chillingly believable corporate sociopath. The film challenges us by making us spend time with him, by making us wonder whether we'd also go along with him, but it doesn't present him AS us, or as someone we should sympathise with. Of course, I'm using an extreme example, but think about it, would you really be any more interested, given how they behave, in spending time with any of these characters? How about John Lithgow as Debbie's Father who has ignored the existence of his daughter and granddaughters for the best part of 35 years? Albert Brooks as the father who has been mooching off Pete for what seems to be about 15 years? Or how about Pete and Debbie themselves? I'd cross the street to avoid any of them.

This, along with the fact that its 135 minute running time is paced like a cricket match between two all sloth teams, makes This is 40 feel like it actually runs for the entire week its story covers. The pitch of the film is unbearable, roughly half the dialogue is yelled or screeched – that's about 67 minutes of shouting, if you're counting. Here's the thing; you're somewhat obliged to sit through your own family's trivial arguments about bullshit, but that doesn't mean you would, or should, sit through the same from another family. The difference is twofold; first of all when it's your family you have a personal stake, and second, and perhaps more pressing; you can usually walk away from an argument with your family, here you're trapped, doomed to sit through it until the mercy deficient editor finally allows you respite.

The most elusive and wonderful thing in cinema is usually when you're able to walk out of a film able to say that it truly captured a feeling. This is 40, for all its faults, does that. Finally, magically, someone has filmed what it feels like to have a raging headache, and projected it for 135 minutes. An insufferable film about awful, awful people, This is 40 marks my, and hopefully other audiences, divorce from Judd Apatow.
★☆☆☆☆
Posted by Sam Inglis at 00:25