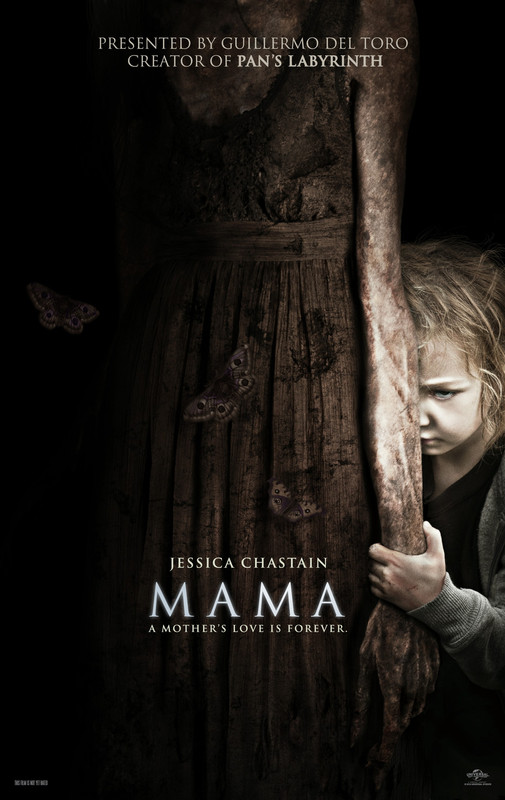 When they are prefixed with 'Directed by' I see the words 'Guillermo Del Toro' as a promise, but Mama is yet more upsetting evidence that when they are followed by 'Presents' those same words should be viewed as a threat.  I know my position on The Orphanage (I didn't like it.  At all.) isn't popular, but that and other by the numbers horror-lite workouts like Julia's Eyes and Don't Be Afraid of the Dark have primed me to expect disappointment when Del Toro - unquestionably one of the horror genre's modern visionaries - is not directing.

Mama, based on it's director's short of the same title begins with two young girls being abducted by their estranged Father, who has just murdered their Mother.  When his car crashes he takes the girls to a cabin deep in the woods.  Five years later, with their Father missing, the girls are found in the cabin and are sent to be cared for by their Uncle (Nikolaj Coster-Waldau) and Aunt (Jessica Chastain).  The girls are almost completely feral, but as the older one , Victoria (Megan Charpentier) re-learns how to communicate she tells her psychiatrist how they survived in the forest, because they were looked after by something they call Mama, something jealous, that seems to have followed them to their new home.

This isn't a film with one huge overarching, easy to define problem, nor is it incompetent.  For the most part, logic gaps that we'll come to shortly aside, the problem with Mama is simply that it's just rather dull.  I suspect that if you're either especially susceptible to jump scares, frightened by rubbery CGI, or someone who never watches horror films, it will scare you once or twice.  I'm none of those things, and I was just bored for most of the running time.  The film tries desperately to conjure an unnerving atmosphere, and to give you sudden jolts, but none of them work.

The jolts, for me, are particularly weak sauce.  Take a moment towards the end of the film, as Jessica Chastain enters the kitchen to find another character standing there, incongruously still, facing away from the camera.  You KNOW she's going to turn around once the camera is in the right place to get her face in close up, and you KNOW what you're about to see when that happens, so there's no tension about it, and no fright when it happens (actually, because of the ropey CGI, the effect is closer to comical).  Compare this to the still terrifying camcorder shot in The Descent, and you'll get an idea why I stayed firmly planted in my seat during this and many other supposed jump scare moments in Mama.

One thing that Mama should really have going for it is the presence of the magnificent Jessica Chastain.  To credit both her and the film, she is physically very different here, with a short black wig and painted on tattoos to show that her character is a bassist in a rock band.  There are some interesting aspects to the character, especially in the way she finds herself saddled with children she doesn't want (in a hamfisted bit of foreshadowing her first scene actually has her do a fistpump and say something like 'Score' in response to a negative pregnancy test).  Chastain gives it her best, but even she, surely one of the most talented and versatile actresses to emerge on the screen in the past five years, can't make this character fully rounded.

This is something of a pattern in the film, many of the performances are capable enough; Charpentier and Isabelle Nélisse as younger sister Lily are both fine, Daniel Kash's hammy psychiatrist less so, but what good work there is tends to be undone by a script and a visual style that feels extremely derivative and uninspired, when it isn't beset by illogic.  For instance, Chastain and Coster-Waldau are supposedly a married couple in love, so why, when he's put into a coma at a given point in the film, does she spend no time at the hospital after the night it happens?  She can always take the girls with her, indeed that would vary the film a bit, because otherwise all the ghostly happenings are confined to the house or the cabin, or if they didn't happen at the hospital it would be an ideal way to explore why not, all without making one of the film's most important relationships needlessly risible.

While Andrés Muschietti wears his visual influences on his sleeve, he does at least present some pretty pictures (when they aren't slathered in needless and rather cheap CGI), but that and couple of slightly better than deserved performances are really all that Mama has going for it.  These things aside it's a dull, poorly written and very by the numbers ghost story.  Jessica Chastain has far better things to be doing with her time and, quite frankly, so have you.
★★☆☆☆
Posted by Sam Inglis at 18:27