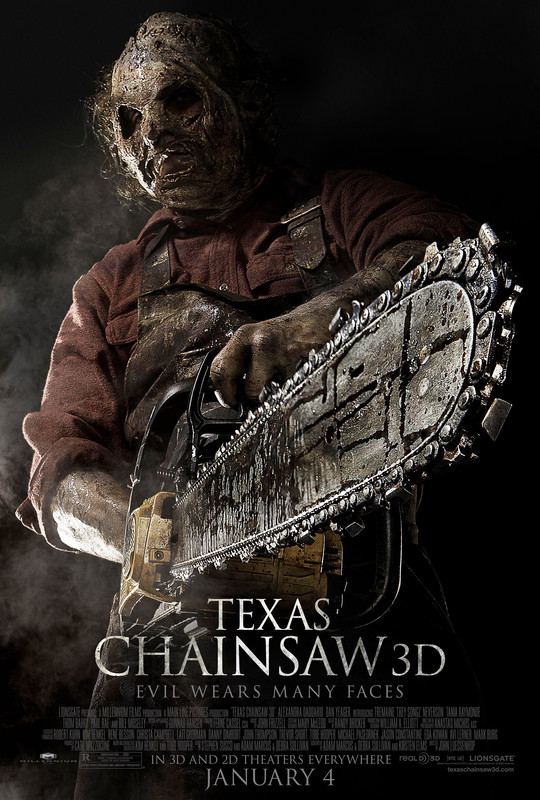 How?  How in the name of all that is holy do I review this movie?  How do I itemise all that is stupid, all that is misconceived, all that is inept, without completely spoiling the rampagingly idiotic third act in its head-slappingly awful entirety?

The Texas Chain Saw Massacre franchise started with Tobe Hooper's dazzling 1974 original, which remains one of the most purely terrorising films I've ever seen, conjuring an atmosphere of pure dread, despite spilling barely a drop of blood.  Hooper continued the series belatedly in 1986, with the gorier and more comedic Texas Chainsaw Massacre 2, which flopped, but has developed a cult following.  Since then, there have been two sequels that were basically attempts at rebooting the series, a remake, and a prequel to the remake.  None of them hold a candle to the original, and the 2003 remake was the film that started that annoyingly persistent train rolling.

Texas Chainsaw has a few choices in terms of which path it wishes to go down, and it never really picks one it's part sequel, part reboot, all stupid. It tries to tie together homage, follow up and new ideas into a confusing mess of a film that can't withstand even the most cursory application of logic, and there's no reason that its biggest logic gap should exist.

I suspect that at one point this film was supposed to be a period piece.  Opening with scenes from the original film (post converted into 3D, apparently to annoy purists to the very limits of their sanity), the film sets itself up as a direct sequel.  The original film was set pretty concretely in 1974, and this film picks up perhaps hours later with what we learn is the Sawyer family (who seem to have acquired a lot of new members very fast, including a cameoing Gunnar Hansen and Bill Moseley) being besieged by an angry mob who want to burn them out of their house.  With that done one of the mob finds a Mother and her baby who have escaped the fire, so he kills the Mother and takes the baby.  Cut to years later, the baby has grown up to be Heather (Alexandra Daddario), who appears to be about 20, which is a problem, given that this film is conclusively set in 2012, because that means that she should be at least 38 and Leatherface should be a pensioner.  Aside from the age discrepancy the reason I suspect the film was originally supposed to be set in, say, 1994 is the almost total absence of mobile phones.  Not a single one of the five characters in their early twenties seems to own one.  In one sense this is welcome - it means the obligatory 'there's no signal out here' scene isn't done - but on the other hand... this is set in 2012 and NONE of the kids has a phone?  Bullshit!  This is also backed up by the fact that the one and only scene involving a mobile phone feels like a shoehorned in setpiece to give us an extra kill.

For the first couple of acts Texas Chainsaw is a pretty basic, pretty dull, 3D horror movie.  It plods through the conventions rather lazily, and the few attempts it makes at character development serve little purpose besides making Heather look like an idiot and her friends look like dicks, neither of which is especially conducive to making us care if they live or die.  On the one hand not developing Leatherface is the smartest choice the film could make - it's not as if it worked in the remake and its prequel - on the other, Leatherface doesn't just lack personality, he lacks presence.  This is a problem with the look of the film, which, whether thanks to the 3D or by design, is so dark that we can't really see much detail in the iconic mask, but it's also a problem with the film as a whole.  Much of what Leatherface does is simply a retread of what Gunnar Hansen's version did, but it lacks that essential menace, perhaps because the film tries too hard visually to play that up. 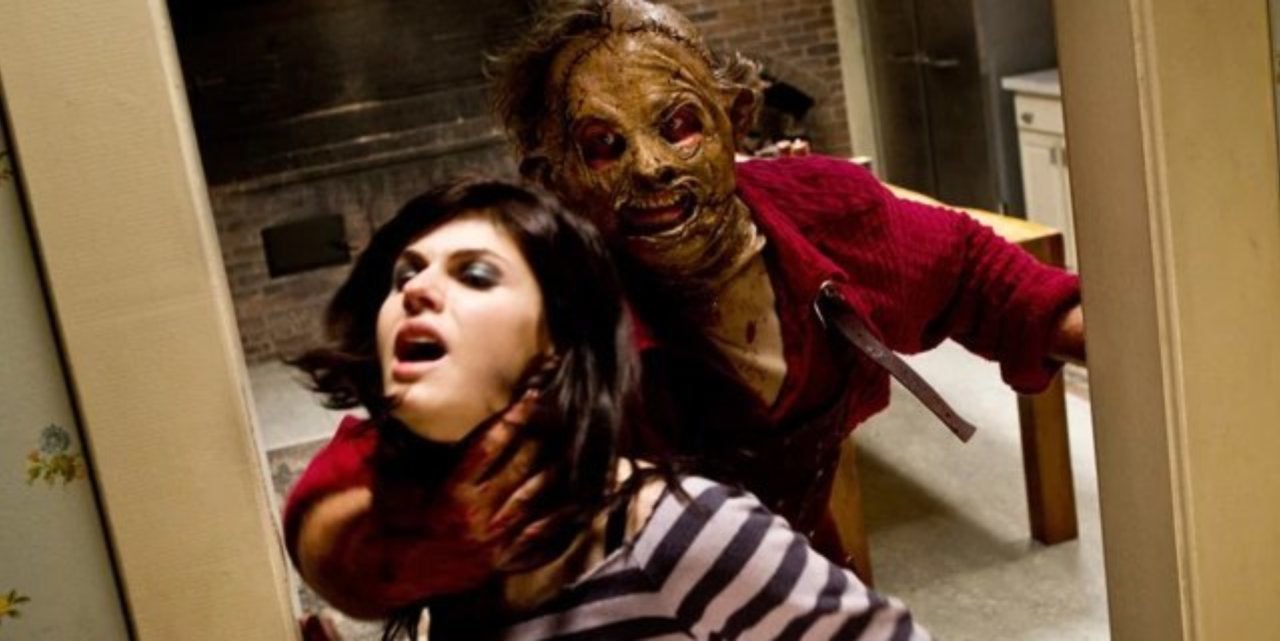 Aside from the darkness there's a basic technical competence at work here.  The 3D (aside from one shot, which is far too straight on) is decent enough, if as pointlessly pointy as ever, and the gore is pretty well executed, but that can't keep the film as a whole from ricocheting repeatedly between tedium and idiocy.  Even when the film does have an idea it doesn't have the interest to follow up on it.  For instance, there's history (and present) between Ryan and Nikki, but while this is acted on it never has any import, never informs any of the characters, or they way they react to one another, so what's the point?  The fatal blow, well, before the third act, is how little fun this is.  It lacks either the exhilaration of terror that the original film had or the sense of overblown madness I enjoy in Leatherface, instead it simply cuts up a few characters that neither we nor the film gives a shit about (Heather forgets them in half the time it takes to click your fingers), and that's not entertaining at all.

However, the time has come to discuss the series of moments in which the film lurches irrevocably off the rails.  There are BIG SPOILERS ahead, so beware.

The setup, as mentioned above, has Leatherface's family home torched by an angry mob.  Years later, the same Sheriff Hooper (Thom Barry) is still in charge of the town's Police, and one of the mob's leaders (Paul Rae) is Mayor, and they've suspected for ages that Jed Sawyer (Leatherface) is still alive.  After Leatherface's remarkably non-deadly rampage through a funfair, in which a local deputy decides not to shoot him because... well, it's just that stupid a movie, Heather is taken to the Police station, where she's shown the files on her family, and discovers the truth about what happened 20... or 40, who the hell knows, years ago.  And this is where the stupid really begins.

Within seconds, despite him having brutally murdered her friends and tried to do the same to her literally minutes ago, Heather seems to decide that blood is thicker than water, and that she's now on Cousin Leatherface's side.  This wouldn't be such a terrible idea, perhaps, if there was anything to indicate that Heather might be a bit cracked, or if Alexandra Daddario had more than 'pretty' and 'screaming' in her bag of acting tricks but there isn't, and she hasn't.  As mentioned above, Leatherface is somewhat developed in the third act, but he's developed as an anti-hero, protecting his cousin.  If there's one thing we learned from the remake and its prequel the surely - SURELY - it's that trying to have us sympathise with Leatherface is a bad idea.

I won't describe all the acts of mind-boggling idiocy in the film's final half hour, but suffice to say that nobody is immune from the way the script seems to lobotomise its characters at its convenience, not even the until then rather reasonable Sherrif Hooper, and that the way that the film sets itself up for a sequel manages to be silly, but not silly enough to at least be trashily amusing.

All told, Texas Chainsaw is another in a long series of missteps in a franchise that probably should never have been a franchise.  I can see that there's at least been some effort put into doing something different with the characters, but the script needs serious attention to give it some character and to address the yawning gaps in the logic of the story and timeline.  It's awful, and an early contender for the eventual Worst of 2013 list.
★☆☆☆☆
Posted by Sam Inglis at 11:08