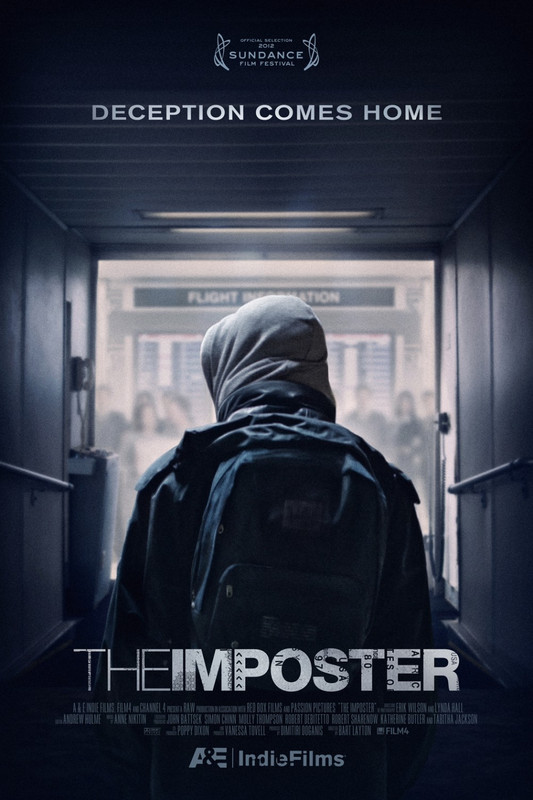 Truth, they say, is stranger than fiction. Most days I'd say that's not true (most fiction is far stranger than my life), but then I'm not a member of the family of Nicholas Barclay, a 13 year old who went missing in 1994. Three years later the family got a call from Spain, saying that Nicholas was there, having escaped from his abusive kidnappers. His sister went to pick him up, and brought home a young man she thought was her now 16 year old brother, but in fact he was Frederic Bourdin; a 23 year old French-Algerian man. The strangeness of the story doesn't end there by any means, but that's really as much as it is fair to reveal before you sit down to watch this frequently jaw dropping film.

I should confess, before we go on, to a small bias: I'm not a great fan of reconstruction in documentaries, and while the scenes with actors reliving the events of the story (mostly the ones that took place in Spain) are effectively shot - there's a very noirish shot of 'Bourdin' sitting in a phone booth during a rain storm - and it's easy to understand, given that there appears to be no footage of these events available, why this technique is used, these are easily the least interesting parts of the film for me.

The story, however, is riveting, and Layton and his cast of interviewees, led by Bourdin on the one hand and Nicholas' sister Carey Gibson on the other, tell it brilliantly.  Layton imposes little on the story, outside of the reconstructions, and instead allows each of the interviewees to tell their part of the story unchallenged.  This could be frustrating, but while he's neither seen nor heard, Layton is clearly putting the tough questions (except perhaps in seemingly neglecting to ask an FBI agent who was assigned to the case how she could possibly have believed Bourdin's incredibly outlandish story of his 'kidnap and abuse').

Without feeling manipulative, the film pushes and pulls at your loyalties as the stories are told.  It seems at first to be a simple story of a terrible man committing a monstrous exploitation on an innocent family, but because real life isn't as simple or as clear cut in terms of heroes and villains as the movies tend to be, those perceptions get challenged from all angles on a regular basis.  The editing is sharp, and keeps the story moving without feeling like the film is skimping on detail, and Layton manages to lay in thriller like tension in the film's last twenty minutes, but without feeling like he's manipulating the truth of the story to that end.

The Imposter will likely leave audiences with more questions when it ends than they had when it began, and there is probably much more to be said about this story, depending on what happens after the end credits go up, but whatever my reservations about the reconstruction elements (and they fewer than normal, because those elements don't seem to fictionalise the film to any great degree), this remains a gripping and frankly astonishing story that really does need to be seen and heard to be believed.
★★★★☆
Posted by Sam Inglis at 13:17