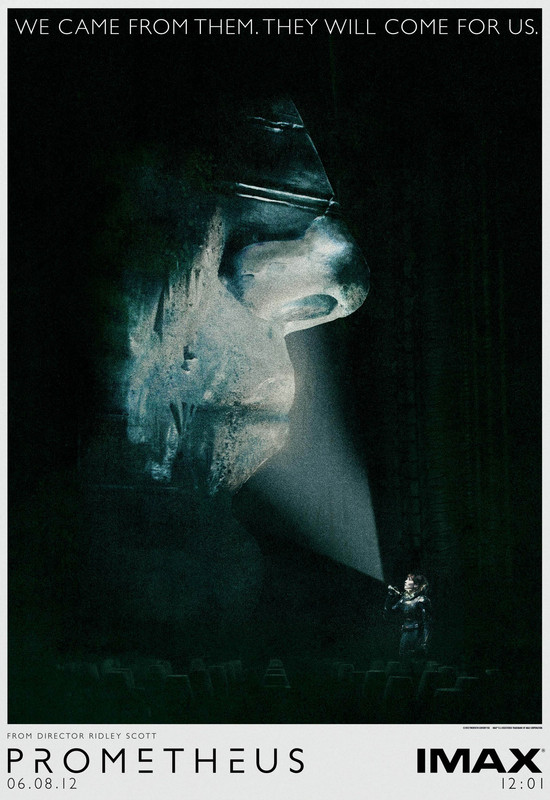 It was an Alien prequel, and then it wasn't, and then it wasn't, but it had some 'shared dna' with Alien. In the run up to the release of Prometheus the party line has been that you'll see the link to Alien explicitly in the film's last eight minutes, which is true I suppose, if you multiply by ten. Honestly, if you can't see the explicit nods to Alien throughout (and figure out what the major one is about half an hour before we see it) you just haven't watched Ridley Scott's earlier film closely or recently enough.

Set in the late 21st century - so, about 200 years pre-Alien - Prometheus begins with archaeologists Elizabeth Shaw (Noomi Rapace) and Charlie Holloway (Logan Marshall Green) have discovered identical symbols across many ancient civilizations, which they think point the way to distant stars, where they expect to find our creators, who they call 'the engineers'. They set off on a long journey through space, funded by the Weyland Corporation (ah, see what they did there?) and joined by, among (too) many others, and android called David (Michael Fassbender), Weyland representative Meredith Vickers (Charlize Theron) and pilot Janek (Idris Elba). When they arrive on the planet where they believe 'the engineers' to be they find it seemingly deserted, but guess what happens.

What's the scariest thing in the world? I know there will be a lot of different answers to that question, but all of them are likely rooted in the same answer: the unknown. This is why I've been dismayed by the recent spate of horror prequels and remakes, because almost all of them - and Prometheus is no exception here - seek to demystify their monster and his/her/its origins. This is without exception a mistake, because by explaining the monster you remove much of the reason it was scary in the first place. The biggest problem that Prometheus has is that by associating itself so closely with the Alien franchise the things that might, if set in another universe, have been interesting ideas, become overly developed answers to questions that nobody ever needed asked, let alone addressed, in the first place.

This is not to say that Prometheus communicates its ideas terribly well. The screenplay, by Jon Spaihts (one of the parties to blame for The Darkest Hour) and Damon Lindelof (whose previous credit was the largely reviled Cowboys and Aliens), feels like it has been Frankensteined from several other screenplays in various stages of development. There are at least three films here: A straight up Alien prequel, a pseudo-religious intellectual Sci-Fi and a pretty generic creature feature. It's likely that none of those were especially great in their own right, but welding them awkwardly together and hoping we won't notice the seams is really not the way to fix them. At its core the idea of 'the engineers' is quite original, has some interesting questions to ask about religion, and promises to be pretty scary, but Ridley Scott gets so bogged down in referencing his past that he never develops this strand of the film in a satisfying (or frightening) way. It also doesn't help that the 'engineers' - who are probably the only design element here that doesn't in some fashion nod towards at least one of the Alien films - look more funny than they do frightening.

One thing that Alien really got right was the amount of characters it had. With such a small cast everyone had time to be afforded a real personality, and you felt like you had a handle on them, and thus could care when things started to go south for them. There are too many characters here, which makes many glaringly obvious cannon fodder, and means others are simply underdeveloped, you suspect that Prometheus will be another film to which Ridley Scott will be doing major after the fact surgery, because it's obvious that there have been extensive cuts here. Suffering from especially anemic writing is Kate Dickie (a talented actress who deserves much better than having to look concerned and - in an echo of a Sigourney Weaver role - repeat the computer). Poor Emun Elliott and Benedict Wong, are also severley underwritten, blending into the background so totally as Elba's crew that they may just as well be an autopilot programme. Rafe Spall and Sean Hayes (sporting a ridiculous hairstyle and beard) fare almost as poorly. We're told that they're scientists, but barely see them do anything science related (and while I'm on that, why in the hell are archaeologists looking for these 'engineers'? Surely there are people more suited to it). Spall is also one of several cast members to contribute a rubbish accent, at times I was convinced he was trying - read failing - to do a deep south American accent and at other moments he just sounds like Rafe Spall.

These are more minor characters. Where the weak writing really bites is with Charlize Theron's character. Her role in proceedings should be reasonably obvious given the context provided by the fact she works for Weyland, but beyond one loaded conversation with Shaw and Holloway, Meredith Vickers never develops in the way, or with the depth, that she should. By the end she feels like an afterthought, little more than a vessel for a headslappingly obvious moment delivered with such melodrama that all that is missing is this

It's not all bad news though. Thanks to the Alien influence there are compelling pieces of design here (though few are especially new) and a central performance that just about holds the film together. Noomi Rapace is a brilliant actress and even though her English accent here slips frequently (why she can't just be Swedish, but speaking English because that's the language everyone else on the ship speaks I really don't know, but thats the tip of the iceberg of stupid in this film) she comes through with a steely performance which channels a similar resolve to that which Weaver had in the first film, but with the extra dimensions of her religion and her relationship with Logan Marshall Green's character, even though both of those things are frustratingly under explored. It's not a vintage performance, but it's far and away the best thing in the film and a good demonstration of her raw on screen charisma. The other side of that couple fares less well. Green comes across as a handsome Tom Hardy alike, but lacks the presence and magnetism of Hardy. His chemistry with Rapace is wet and unconvincing as well, and only she - late in the game - convinces us of the depth of their connection.

Also contributing something of quality is the customarily excellent Michael Fassbender. Again his character is less intriguing than he could be - one moment, when another character casually refers to David's lack of a soul, hints at deeper things which are left unexpanded upon - but this isn't his fault. With what he has to work with Fassbender does a fine job, hinting at the possibility of something more beneath the programming and the detachment that comes with David being what he is. 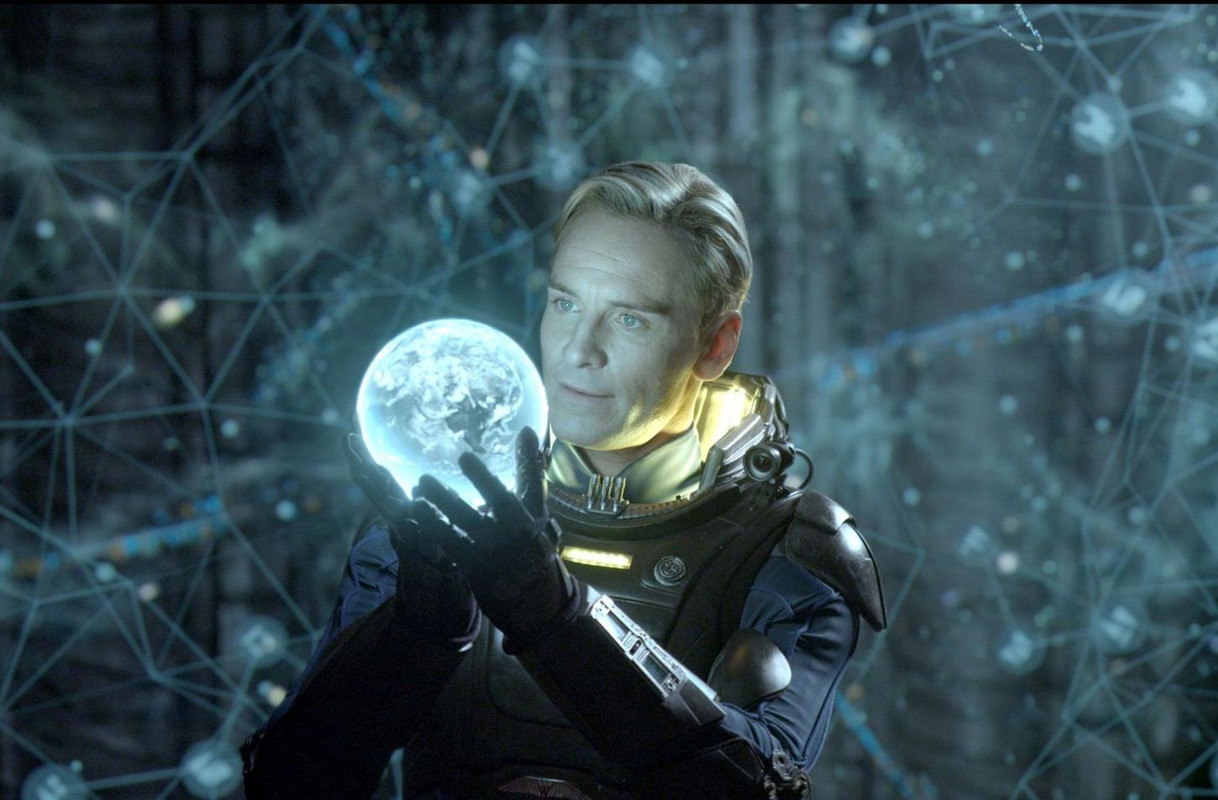 There are also a lot of niggling little things, again, several brought about by the connection to Alien. Follow me on this timeline for a second... Prometheus is set roughly 200 years before Alien, and the Nostromo is an old ship, about 30 years out of date. So that's a 170 YEAR advance in technology between the Prometheus and the Nostromo. Surely the design should reflect this to some degree, but it doesn't. Prometheus, being a big shiny blockbuster, looks ultra modern, with floating flat screens, robotic surgical chambers and holographic machines that let people see your dreams. Why is none of this technology available in any of the Alien films (even Alien Resurrection, which is set 400 years after this film)? It's a small thing, but once you see it it undermines the reality of this world, because it's so inexplicable. Also a little thing, but one that bugged me, is the design of the suits that allow the crew of the Prometheus to go outside, which all have yellow lights in the collar inside the helmet. First off this just isn't very attractive, but honestly, how do they see with this bright yellow light shining up into their field of vision? Design should be cool, certainly, but it should also be believable that it serves its intended purpose.

Ridley Scott and cinematographer Dariusz Wolski shot Prometheus with 3D cameras, and Scott has clearly tried to make the best of the technology. On the plus side this is technically the best use of 3D I've seen in a long time; ghosting is completely absent, and Scott's technique of using extra light on set to counter the darkening effect of 3D projection and glasses does actually help. What remains missing is any compelling reason for the film to be in 3D. Not a single shot actually benefits from it, and, I say again, the minute you make me put glasses on you put up a barrier that negates any immersive effect that 3D might otherwise have. In doing 3D technically well, Scott does us a favour: he demonstrates that it's not about whether the 3D is technically competent, it still adds nothing.

The most used word in reviews of Prometheus so far has been 'disappointing'. I don't like the film, but I'm not sure I agree with that. Ridley Scott has had spotty form throughout his career (especially when it comes to theatrical cuts of his films), and the last of his films I enjoyed as a whole was Matchstick Men in 2003 (it's underrated, check it out). That being the case I wasn't expecting Prometheus to be some revelatory return to top form - hell, even Legend: Director's Cut form - but I was expecting it to be a bit better than this. At the end of the day Prometheus is a confused mess of a film, torn between taking an interesting and original route and linking itself to a true classic of the genre, as a result neither works, though the more the film nods to Alien the worse it becomes. A future Director's Cut may address some of these issues, but the script problems, and the feeling of indecision about what kind of movie to make run bone deep here. A 3D showing in London will cost you more than the Alien Anthology Blu Ray boxset, I'd suggest buying that instead.
★★☆☆☆
Posted by Sam Inglis at 18:27