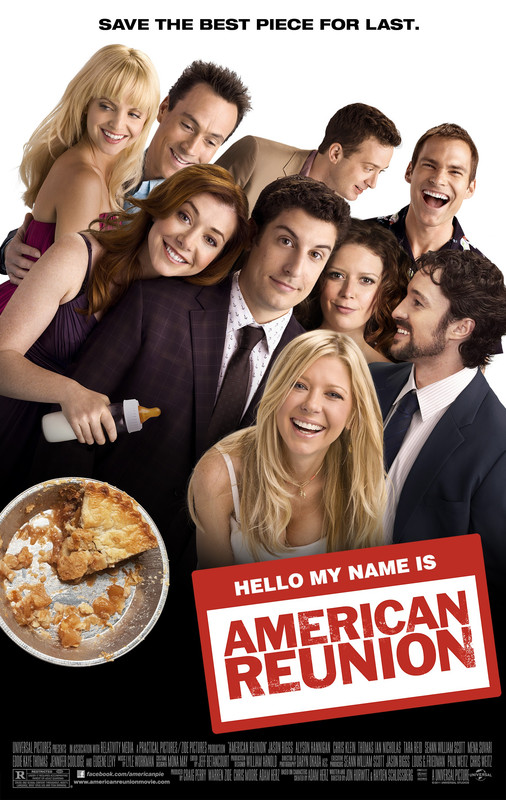 When things that happened when you were a teenager (and in your late teens at that) start getting nostalgic reboots, you begin to feel a bit old. Can it really be 13 years since I sat down in a cinema to watch Jim (Jason Biggs), Oz (Chris Klein), Finch (Eddie Kaye Thomas), Kev (Thomas Ian Nicholas) make a pact to all try to lose their virginity at prom? Can it really be 13 years since Michelle (Alyson Hannigan) told us that 'this one time, at band camp, I stuck a flute in my pussy'? Since Stifler (Seann William Scott) drank beer with an extra ingredient? Since the term MILF was coined? Yes it can, and this fourth (or eighth, depending on how you're counting, and I'm going with fourth) slice of Pie reunites us with most of the old gang.

This time the guys and girls are in their thirties, and attending their 13 year high school reunion (they know that's not a thing, there's a throwaway line about it). Jim and Michelle's marriage is in a sexual rut, prompting advice from Jim's Dad (Eugene Levy). Kev is a house husband, Finch is telling tales of his adventurous lifestyle and Oz is a sportscaster and minor celebrity. The group of old friends (and Stifler) get together and plan to have a fun weekend, re-connecting and re-capturing the old days.

You know those friends you had at school... the ones you don't see for years and then when you finally see them again they haven't changed a bit? At first, it's sort of fun, but then it's a bit tiresome, because you've grown up, and they haven't. That's pretty much what watching American Pie: Reunion is like, and that's rather a shame.

What I really like about the first three American Pie films is that, in between all the sex jokes, the boobs and the gross out, it really did find time to grow its characters. It created a group of friends who, even if they weren't always massively compelling in their own rights (Kevin), did actually feel like a plausible group of friends, and who, over the course of the series, did actually change and mature to some degree. Okay, it's hardly Ken Loach or anything, but I always bought into the central friendships, and especially what became the central relationship between Jim and Michelle, so well developed in the much maligned American Pie 2. While the sequels did hit many of the same beats with their set pieces, the overarching story felt fresh and somewhat organic (more so with American Pie:The Wedding), and everyone but Stifler evolved. Part of the reason this is true is, I suspect, that the first three films were all written by Adam Herz, whose work seemed underpinned by affection for and interest in his characters. American Pie: Reunion is written by directors and Harold and Kumar creators Jon Hurwitz and Hayden Schlossberg, and the difference is rather marked.

ALL the characters are back, and that does create some of the same problems that dogged the mixed bag of American Pie 2, simultaneously the best and the worst of the series. The focus here is far too scattered. Jim and Michelle have been the centre of the series since the first sequel, and you'd think that with their 2 year old son and their marital problems, their relationship would again be the perfect prism through which we could see the series grow. Unfortunately, in their desperation to accommodate everyone, Hurwitz and Schlossberg reduce the presence of Alyson Hannigan's Michelle to only a handful of important moments.

Instead, the film focuses on the guys, but the problem is that two of them are bores (Kev and Oz) and the other three are just the exact same guys we saw last time. Stifler is the epitome of that guy who refused to grow up, and while his antics are amusing from a guy in his early twenties, now that the character is supposed to be in his thirties he just looks like a douchebag, which would be fine if the writers didn't shove him front and centre so much, and instead gave us more of the sad clown that is sometimes glimpsed (and which Scott could easily pull off). 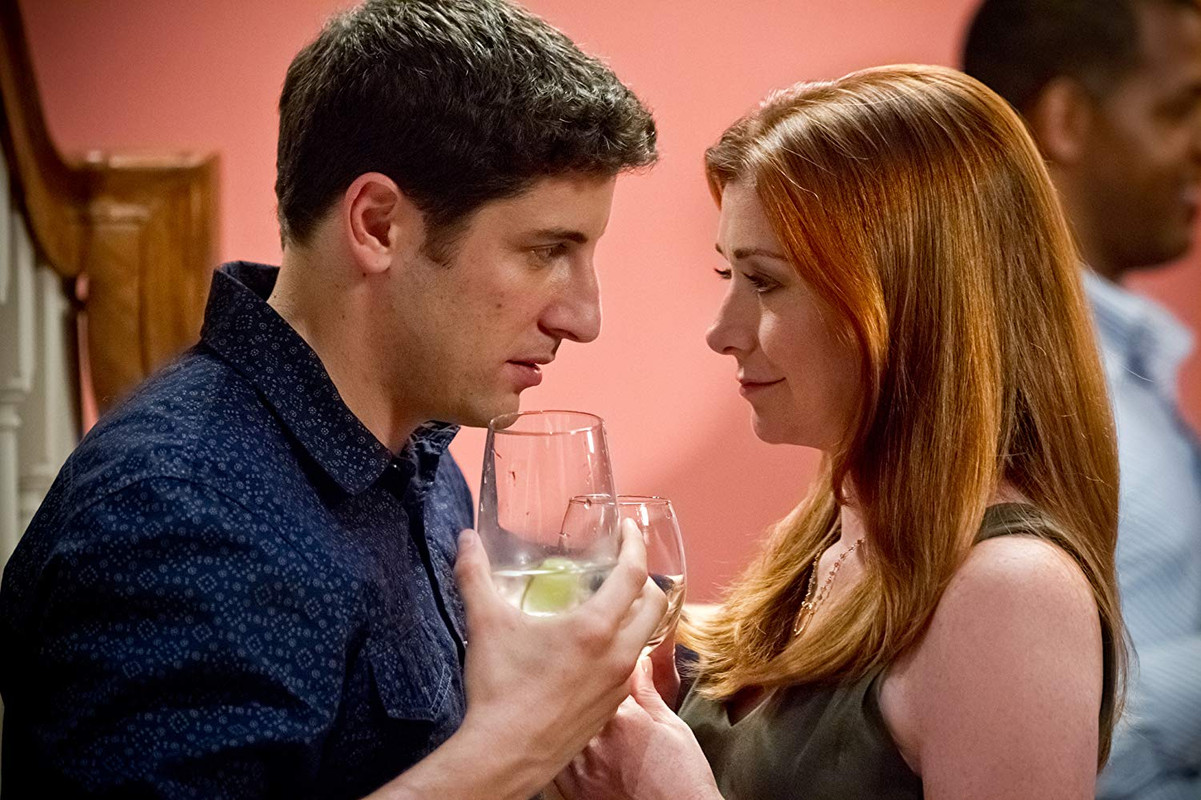 It's frustrating watching this film because there are moments that work - like a nicely staged scene of Jim waking up naked from the waist down after a night out and trying to hide the fact from Michelle and her friend, which comes complete with something that nobody needed to see - but also many that don't. These largely consist of the storylines, and I use the word lightly, involving Kev, Oz and their respective old flames Vicky (Tara Reid) and Heather (Mena Suvari). Reid looks impressively human like, given the surgical disaster zone her body has become over the past decade, but her acting hasn't improved and she is bored and wooden. As for Thomas Ian Nicholas, his entire character contribution here seems to have been growing a beard. Their story never catches light, indeed it's barely a story... and worse it's the exact same barely a story they had in Pie 2. Oz and Heather always struck me as dull, and their storyline here is no exception as they both try to decide whether to break up with the partners they've brought to the reunion.

On the plus side, Jim's scenes with his Dad are as much fun as ever (I suspect that Eugene Levy improvised much of his dialogue), though unfortunately Levy's expanded role does become rather too much of a good thing. Some set pieces also work rather well, with the central one in which Jim has to get a topless 18 year old he used to babysit (Ali Corbin) upstairs without her parents seeing, hitting a lot of big laughs (and a couple of cringeworthy moments along the way).

If the rest of the movie were as satisfying, this would be a slam dunk, but the good bits are fewer, further between, and still less satisfying than the best of the other films. That said, when it does come to life you do remember why you liked these characters and this series in the first place. There are laughs here, and there is nostalgia for a viewer of a certain age, but neither is really enough, and for the most part this feels like what it is; a contrived reboot, missing one vital part.
★★☆☆☆
Posted by Sam Inglis at 21:00