Sherlock Holmes: A Game of Shadows [12A] 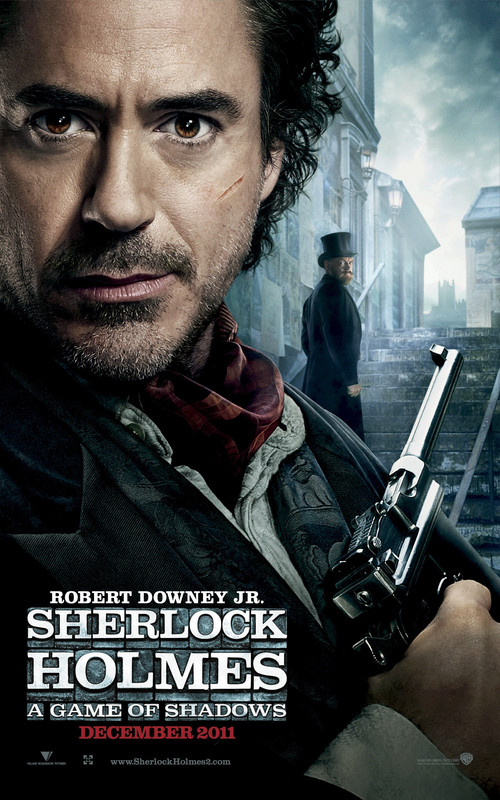 A couple of years ago I gave a surprisingly warm (especially for me, let's not kid ourselves here) review to Guy Ritchie's Sherlock Holmes, which threw me for a loop by not only failing to suck, but by actually being pretty damn good, well, Ritchie has largely redressed the balance here, because this sequel feels tired where the original felt fresh and is wheezy where the original was energetic.

Time has passed in the world of Sherlock Holmes (Robert Downey Jr) and Dr John Watson (Jude Law). Watson is getting married, and preparing to leave behind his cases with Holmes, but Professor James Moriarty (Jared Harris) has other ideas. He has a dastardly plan, but also wants to toy with Holmes. After Moriarty's cronies try to kill Watson and his bride (Kelly Reilly) as they leave for their honeymoon the two old colleagues find themselves trailing across Europe, often accompanied by a gypsy named Sim (Noomi Rapace), hunting Moriarty and trying to stop whatever he has planned.

One of the key problems with Sherlock Holmes: A Game of Shadows is foregrounded in its title; it's a considerably darker film than its predecessor, in all aspects. The first film did have a sort of grimy look to it, but the colour palette was certainly more varied than that of Game of Shadows, which is grey. Costumes are grey, settings are grey, even the cinematography has a grey pallor about it, making the film quite dull to look at.

This darkness and dullness is also felt in the rest of the film, there is a definite attempt to be grittier, make the violence as close to the edge of the 12A certificate as possible and to generally make the film as downbeat as possible. To its massive disadvantage this is felt most in the relationship between Holmes and Watson, which seems to have lost its spark. Much of Holmes wit seems missing this time, and so his intellect, unleavened by humour, often feels smug. Where we sensed Holmes and Watson's closeness last time, we need to be convinced of it here.

When the film goes for funny this time out the aim has a tendency to be off, hitting silly and campy or - in one scene involving Holmes' brother Mycroft (Stephen 'national treasure' Fry) and Watson's wife - just plain inexplicable. The scene of Holmes in drag is a good example; the visual is good for one small, sniggering, laugh, thereafter it's just awkward, and goes on far too long. The set pieces are reasonable, and an early one in which Sim, whom Holmes has just met, is attacked by a would be assassin is especially good fun, ranging through a massive gambling den and on to the streets. It's also true that Ritchie keeps the pace, if not the interest, high.

On top of the fact that the returning leads feel rather stunted this time out, there is the fact that Noomi Rapace, who is among the top 1 percent of the best working actors (see her astonishing turn in Daisy Diamond for proof) is utterly wasted as the gypsy woman who may have the key to stopping Moriarty. At a certain point, towards the end of the film, I thought I'd figured out what, besides window dressing and an expositional prop, Rapace was for in this movie, it seemed like an obvious twist, but still, a pretty cool one. I was wrong. It turns out that I had written a much more interesting and complex climax for the film from my seat in the fourth row from the back. That's never good. I hope Rapace is better served by the upcoming Prometheus, and, if not, that she has the good sense to go back to Sweden and stop taking roles so beneath her talents.

As the series' big bad, Jared Harris gives a solid performance, but his Moriarty never seems much of a threat, or even especially evil (particularly given his irony laden speech to Holmes across a chess board), but this is more the fault of the script than the performance, which is true of all the acting here, everyone is working hard, but the mood of the movie is wrong, and the script feels a bit lifeless.

It's a pity that Sherlock Holmes: A Game of Shadows isn't better, because the cast - right down to Stephen Fry and the ever-charming Kelly Reilly - deserve more than they're getting here, and the first entry meant that this was a sequel I had been looking forward to.
★★☆☆☆
Posted by Sam Inglis at 21:11