Pirates of the Caribbean: On Stranger Tides [3D] [12A] 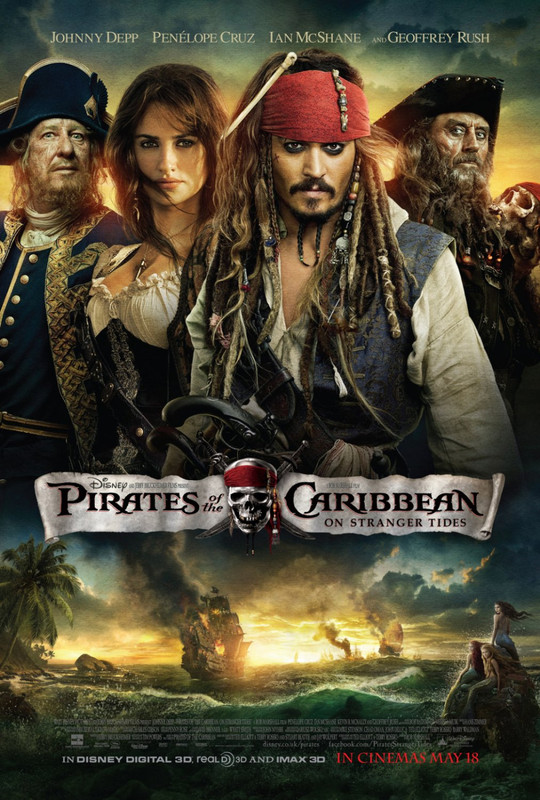 Back in 2003 the first installment of the Pirates of the Caribbean series was refreshing; a fun blockbuster which saw Johnny Depp give an entertaining performance, and reap some long and richly deserved mainstream rewards after fifteen years as one of the most reliably interesting actors in cinema. Eight years on and here we are with the fourth film in the series. It seems to be going back to basics somewhat, with a more linear story than the last, baffling, installment; At World's End and the cutting of Orlando Bloom (yay) and Keira Knightley (boo) from the cast list. At least, that's what it wants you to think. In reality, everything that has been pruned away is replaced by something worse. Thanks, Hollywood.

I would usually begin the second paragraph of a review with a brief plot summary, but this time I'm not going to, because there's not a plot here, there is just STUFF. STUFF happens for all of this film's 137 minutes, but, despite Keith Richards' cameo laying out a quest that is so linear it may just as well be the plot of an 8 bit platform game, none of it seems to serve any larger story. There are about six tangents, each involving different characters or sets of characters, and not one makes sense, manages to be interesting, or feels like it has anything to do with the other stories. It's all just STUFF. Loud STUFF. In 3D.

I think my feelings on 3D are well documented, so I only want to address the use of the technology briefly in this case. On Stranger Tides was shot in 3D, but you'd be hard pressed to tell. Even in the scenes that try to exploit it (generally involving swords pointing out of the screen, because what movies were missing the past 110 years was the ability to point at us) the 3D is utterly underwhelming. In fact the only effect I noticed from the 3D is that I couldn't see the film properly because, as ever, it's so dark that the 3D process and glasses flatten the picture and obscure detail. If you must see this film (and honestly, you must not), do yourself the favour of seeing it in 2D, because all you'll get for the extra price of 3D is the chance to watch an already dark film with sunglasses on. Again, thanks Hollywood.

The 3D, however, isn't the major problem here. The problem is the astonishing tedium. I may have loathed Sucker Punch (which remains the worst film of 2011), but at least it generated some feeling in me, even if that feeling was revulsion, anger, and the desire to get Zack Snyder some therapy. On Stranger Tides, by contrast, is just unfathomably dull. It's like a five year old wailing 'look at meeee' for two and a half hours, but not doing anything when you do look at it. Even the action scenes are a snooze. In those, the 3D is the problem, rendering the action smeary and indistinct, though even that can't hide the laughably unconvincing doubling of a pregnant Penelope Cruz. The action is also completely derivative of the earlier films, with the initial swordfight almost a shot for shot lift of Depp's first fight with Orlando Bloom in the first film, only this time with the least convincing drag king in history as Jack's opponent.

Between the action scenes, we get a slew of new bodies to populate the film. The characterisation is laughably thin. Blackbeard (played by Ian McShane) is supposed to be the ultimate badass in the pirate world, but he's underwritten and less than scary, even when threatening to kill Cruz. In the franchise's Orlando Bloom shaped hole, Sam Clafin plays a missionary captured by Blackbeard. It's not entirely Clafin's fault that the character doesn't work, since screenwriters Ted Elliot and Terry Rossio give him all the personality of a wet fart, but the fact that Clafin is more wooden than the mast he's tied to for quite a lot of his screentime really doesn't help. As the other side of the deeply unlikely missionary/mermaid love story, French actress Astrid Berges-Frisbey has an appropriately limpid beauty but is no more engaging or well written than her paramour. It also doesn't help that, just as their story is climaxing the film up and forgets about them, but that's par for the course with the abysmal writing and editing on display here. It's also worth noting, as far as the supporting cast is concerned, the awful performance given by Richard Griffiths as King George II of England, one of the more embarrassing things done by a good actor in recent memory. 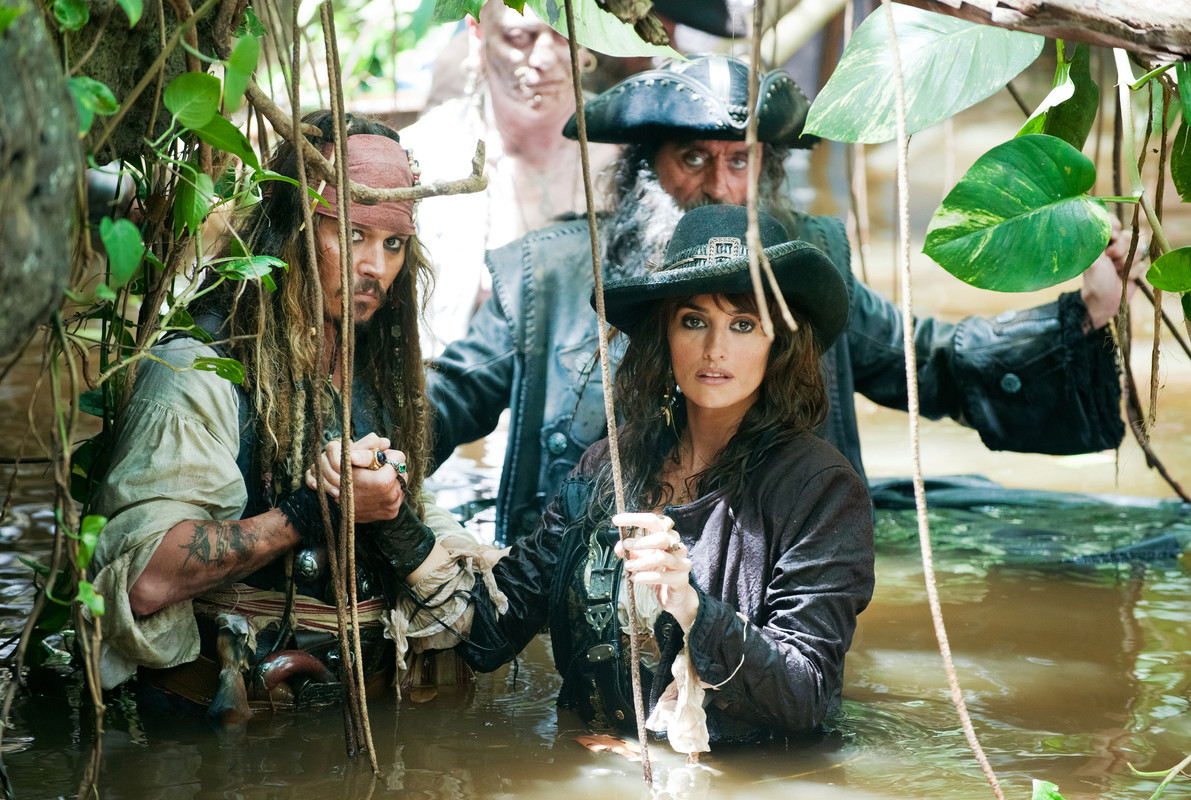 Okay, so the support is terrible, but there are three solid actors at the centre of this film, surely there must be something to enjoy there. You'd like to think so, wouldn't you? Geoffrey Rush, happily, does seem to be enjoying himself, but sadly the effect doesn't translate, because he's never on screen long enough for his story (he's trying to beat Jack Sparrow to the fountain of youth, sailing under the colours of the British navy as a privateer) to gain any depth or traction or for his performance to provide any respite from, well, everything else. Penelope Cruz, as I noted above, was pregnant during the shooting of this film, and it's pretty poorly hidden, it's also seriously constricting, meaning that her character (an old flame of Jack's, which really doesn't work, because I'd always assumed Jack was gay) does almost nothing. Cruz looks and sounds bored, turning in a lifeless performance that has 'I have a mortgage payment coming up' written all over its joyless face. She also has a peculiar lack of chemistry with Depp, despite the fact they worked well together in the still underrated Blow.

And then there's Johnny Depp. It's just sad. It's sad and depressing to watch this great talent pissed away in a film as bad as this and to see him so obviously and cynically cashing a cheque. This time out, his Jack Sparrow is listless, he doesn't commit to the character at all, even letting the voice slip. For all the flailing he does (and he does a lot) the energy always remains low and the performance phoned in at best. I wouldn't care so much, except that Depp likely made well in excess of twenty million dollars for this performance, you should expect more for that sort of money.

Over the course of an interminable 137 minutes we are pulled this way and that, thrown from scene to scene in a senseless, flailing fashion that makes this already brutally long film feel as if it is missing huge swathes of material. At least I hope that's the case, because otherwise the endless series of moments in which I all but yelled 'who's that? What's he doing? Why? Where are they? How does he know this? WHY?' are the fault of the writing. Frankly, I struggle to find anything remotely positive to say about this film.

So, the question is 'is it better than the last one'? The answer, sadly, is not really. It's shorter, which helps, but all that amounts to is saying that this giant pile of shit, smelly though it is, is a bit smaller than that giant pile of shit. Look, I know this is critic proof, I know there are at least two more of them coming, but let's demand more of filmmakers than this.
★☆☆☆☆
Posted by Sam Inglis at 11:50